A trade school for Catholics 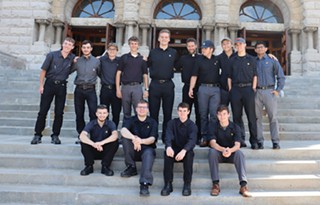 PHOTO COURTESY OF HARMAL ACADEMY
Harmal Academy of the Trades in Grand Rapids, Michigan, is the model for a trade school that the Catholic Diocese of Springfield wants to create to provide vocational and spiritual training for young people.

The Catholic Diocese of Springfield wants to create a trade school in the city to provide vocational and spiritual training for young people interested in working with their hands and learning in an environment of contemplation and prayer.

While the first stage of the project is to teach skills such as carpentry and plumbing, the project may expand into offering a nursing program and a school to prepare teachers.

"We're hoping there'll be interest from the business community to help invest in this and fund it, because everybody needs workers and is seeing the same talent challenge," said Mike Christie, chief of staff for the diocese.

The trades training program will be residential with students living in community, attending mass and receiving spiritual instruction as well as vocational education, he said. The target age for pupils will be immediately post-high school, although he said he could see scenarios where high school students would be able to participate as well.

Just where the school will be remains an open question, he said. But he does not anticipate new construction.

"No. 1, we envision this being like a Blackburn model of a working college, where students run the place. That keeps your cost down. Part of the experience and learning would be taking care of what's right in front of you: the kitchen, the buildings and grounds, the laundry. Those kinds of things, by the way, also are part of the formative experience in developing of life skills.

"The other part would be internships and apprenticeships. where they're able to generate their own income to offset tuition. There will be partnership between the academy itself and the business community."

Christie said the academy is being modeled after the Harmel Academy, a trade school in Grand Rapids, Michigan.

"Our focus is concretely anchored in the local realities and the pipeline of what the local economy and business needs are and, conversely, what the opportunities are for these students. ... We see building trades, skilled mechanical labor for auto and diesel, concretely tied to what's happening in our region. But our hope is to draw from the Chicago area, Indianapolis and maybe beyond."

Christie added they hope to have an enrollment of about 100 students. The timeframe for beginning the project is 18 months to two years, although he is concerned about finding tradesmen and women to teach the classes.

"This is where there's a time urgency. Candidly, the demographic challenge that's confronting the trades will also confront us as it relates to faculty. So many of the skilled trades people are at or near retirement, and we really need their wisdom and expertise to be part of this."

Dave Phelps heads the Harmel Academy, which Christie describes as an inspiration for the Springfield project.

"We have a very robust, integrated humanities program to help form the men intellectually and help form their character," Phelps said. "They live together in households which you can think of like spiritual fraternities. They pray the Divine Office of the church three times a day in community."

The Divine Office includes prayers for the morning, noon and evening and involves Scripture readings from the Psalms, the Old Testament, the New Testament and a Gospel reading.

"It's probably overstating it to call it 'monastic,' but that's the closest way of understanding it," Phelps said. "Right now, the goal is that they come here and not simply pick up a job or a career, but learn how to be a man."

The Harmel Academy only teaches men, but Christie said they are planning on the Springfield school being coeducational. However, he noted that most of those interested in entering the building trades are men.

But more women may be drawn as the diocese educational outreach expands. Other areas where there is a perceived need in the community are nursing and teacher education. Christie said eventually the diocese would like to prepare students for careers in these fields as well. Whether these programs would be part of the trade school or separate endeavors remains to be seen. "We have the same kind of talent crisis in teacher education that we have in the trades. (The Springfield Catholic Diocese) sponsors 43 schools. We're very concerned and working on a number of things to try to cultivate the vocation of teaching in schools, particularly Catholic schools," Christie said.

He said the proposed teacher education program may be a more affordable option for aspiring educators.

"We hope we might be able to use the same model we will for the trade school specifically for teachers with housing and job programs and on-the-job study, as opposed to going off to school and accumulating debt."

A nursing program would be something further into the future, he said. He noted there is an existing Catholic nursing program at St. John's Hospital but added there remains a desperate need for nursing professionals in the community.

"These three areas (trade workers, teachers and nurses) have a profound talent shortage. And they've all gotten worse after COVID."

Christie said the approach would deviate from a typical junior college.

"We have lots of buildings in the church that are underutilized or are vacant. Can those be used for young adult housing for these particular vocations? We're trying to bring people into the community to serve. That will be a little bit of a unique approach. There's a number of young Catholic people that want to live in community and live a life of prayer."