Gettysburg Address journey was a trip 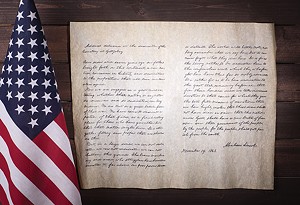 Glenn Beck’s been down on his luck.

The talk show personality with bluster – he’s called Barack Obama a racist and said that relatives of 9/11 victims complain too much –has been laying off staff at his Texas-based production company in recent years. Revenue, Beck has said, isn’t what it used to be.

But a nonprofit outfit founded by Beck called Mercury One, which bills itself a humanitarian and educational charity, got a boost last year from the Abraham Lincoln Presidential Library and Museum.

The ALPLM last June loaned Mercury One some of its most precious possessions, including a copy of the Gettysburg Address, a key to Lincoln’s house, a letter he wrote and a nameplate from his home informing passersby that A. Lincoln lived there. The 2018 loan was the third time ever that the Gettysburg Address has left the Springfield institution. It was Mercury One’s opening weekend as a museum.

In 2008, armed drivers took the document to Pennsylvania in a locked truck for the opening of the Gettysburg National Military Museum and Visitors Center. ALPLM officials with keys to the truck’s storage compartment followed in a rental car. In 2009, the Chicago History Museum borrowed the treasure for a month-long show.

The ALPLM couldn’t find the 2009 loan agreement when I asked. Unlike Mercury One or the ALPLM, the Windy City museum is accredited by the American Alliance of Museums, which certifies that institutions know how to handle priceless artifacts. ALPLM officials and staff of the Pennsylvania institution exchanged emails for nearly a year before the document left Springfield in 2008. The loan agreement was signed more than a month in advance, after ALPLM staff reviewed a National Park Service report on the building where the document would be displayed. Is the facility safe from fire and floods? Are temperatures, humidity, dust and lighting levels adequately monitored? What about insects, mold and rodents?

Things were different when Mercury One borrowed the Gettysburg Address for a three-day exhibit dubbed Rights and Responsibilities that also featured such treasures as a replica pair of Dorothy’s ruby slippers from The Wizard of Oz, costumes from Star Wars and an exploding rat the British created during World War II, with the idea of scattering the critters in German factories in hopes that the Nazis would toss them into boilers and so blow the Third Reich to smithereens.

Yes, Mercury One owns some cool stuff, and the person who keeps it safe is Courtney Mayden, who was hired in the fall of 2017 as an associate curator at the Dallas-area facility. Before that, she was a server at Pluckers Wing Bar in nearby Addison. She also has a degree in art history and had served as volunteer docent at a Fort Worth art museum and worked as a gallery attendant at a Dallas art museum.

It was Mayden’s job to ensure that humidity, temperatures, security and other details were up to snuff to protect Abe's speech and other relics. She helped unpack the ALPLM artifacts, according to emails, and repacked them for the return trip to Springfield. ALPLM director Alan Lowe made the trip, with plans to be interviewed by Beck for a television program.

The Gettysburg Address is so cherished that the five existing copies are kept in near darkness within vaults where temperatures are between 50 and 65 degrees and relative humidity is between 40 and 48 percent, according to a 2013 story in Popular Science. A fingerprint is cause for consternation because oils left from human skin attract contaminants that speed decay. The ALPLM measures its copy, according to the 2013 story, to determine how its dimensions change in different conditions.

Pros at the Library of Congress say there is no hard-and-fast rule, but Elmer Eusman, chief of the library’s conservation division, says via email that most folks can learn how to safely handle historic documents in a relatively short amount of time if trained by experts. “The duration will have to do with the person’s abilities and the degree of fragility of the artifact,” he writes.

Contrary to ALPLM policy, no loan request was put in writing before artifacts were shipped to Texas -- museum officials say it was an oral request. It’s not clear when it was made. The Chicago History Museum submitted its written request to borrow the Gettysburg Address one year before the 2009 show; after initial exchanges of emails, the Gettysburg museum submitted its request more than eight months before the 2008 exhibition.

The Library of Congress requires that formal loan requests be made at least nine months before an exhibit opens. Acceptance of facility reports that include such things as floor plans and humidity and temperature readings is the first step of the approval process, Rachel Waldren, senior exhibits registrar for the library, wrote in an email in response to questions about standard policies and procedures for loans.

Mayden sent temperature and humidity readings nine days before the exhibit opened. By then, the shipping company was already making arrangements to transport artifacts. The loan agreement with Mercury One was signed by ALPLM officials two days before the exhibit opened, the same day that Mayden informed the Springfield museum that she hadn’t decided between two spots for exhibiting the document.

“I’m leaning towards Glenn’s office as the display location,” Mayden wrote in an email. “The humidity in his office is lower, the temperature is more stable and there is the added benefit of increased security.” Emails show that the display wasn’t ready until four hours after the exhibit was scheduled to open. "I am finally done setting up!" Mayden emailed an ALPLM official in Springfield. "I'm attaching a picture of the display."

Mayden didn’t return a phone call. In an email to ALPM spokesman Chris Wills, she notes that she has a degree in art history from New York University, where she says she studied conservation techniques for paintings. She says she also learned about conservation in 2017 during a two-week internship at a Gilded Age mansion in upstate New York, where she says she learned how to care for furniture, ceramics, textiles, books and documents.

Wills says via email that Lowe was present when artifacts were unpacked and put on display, and he notes that everything was returned safe and sound. “We appreciate your interest in this textbook example of how to properly handle the loan of a historic document,” Wills wrote.

Textbook? Shipping arrangements were made before a loan agreement was signed with an outfit that had never before held an exhibition. The Mercury One website is festooned with “Donate Now” buttons, the charity’s collection is a hodgepodge that includes Hollywood memorabilia, an exploding rat and sundry other items, with a Thomas Paine letter and a few other historic documents thrown in. Mayden seems earnest in emails, but she was just getting started as a professional conservator. It sounds like a lot of stuff got slapped together at the last minute, compared with prior loans and how they roll at the Library of Congress.

Or maybe it’s just me. I confess: I have an issue with the Gettysburg Address gracing the office of a man who once called our only African-American president a racist.

Mayden told the ALPLM that 2,316 visitors saw the exhibit. Beck, who led private tours with tickets topping out at $750, has crowed. Last fall, his charity donated $50,000 to the ALPLM, saying it wants to help retire a debt the museum’s private foundation incurred to buy artifacts. The press release on Mercury One’s website announcing the gift is headlined “Broadcaster Helps Protect Lincoln Artifacts.”