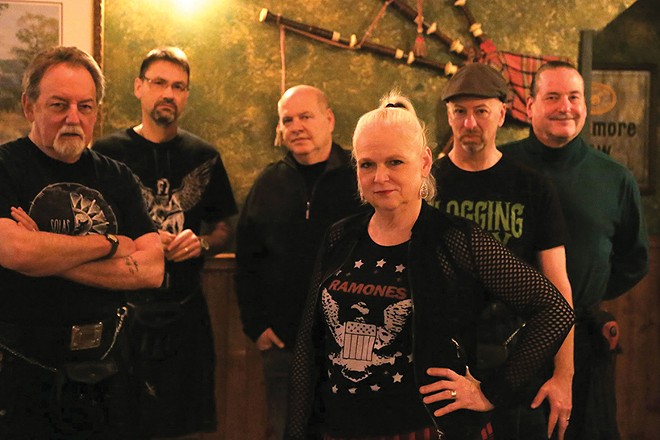 Here's hoping you're doing fine and fuzzy, while getting ready for some St. Patrick's Day shenanigans in the best way possible, under the circumstances, of living within the constraints of a worldwide pandemic. We're continuing to see an increase in live music, all while hoping beyond hope things will keep traveling in a safe direction. Can it be just a year ago on March 15 that we locked down live music performances along with the closing of venues in order to deal with the then truly novel, COVID-19? I don't think anyone could have imagined what was ahead of us on that day in March of 2020. I find it interesting, peculiar, suspicious, weird, ironic or whatever you want to call it, that almost nearly a year later, we're opening back up again.

However it happened, let's get set to take it in stride, keep up the vigilance against the virus and work to get back to what was there before and more. Why don't we get started with what we have on tap this year for local lovers of the lilting lift of Irish and Seven Celtic Nations music during this St. Patrick's Day season? Without the famed Springfield parade to kick off the celebration, things will be a bit different, but different is what we're used to these days, so let's go.

The St. Andrew's Society of Central Illinois, normally leading the parade while sending emissaries of pipers, drummers and dancers all over town, is holding a virtual costume contest from the organization's Facebook page to participate one way in what is generally their biggest day of the year.

The Emerald Underground, as the first and longest-running area performers of the Celtic fusion style, have been through several configurations over their years of existence, but the end result of good music done well is always there. The Celtic sextet plays and performs in kilts (usually) and for 2021 they'll be at Lime Street Cafe on Friday, March 12 and again on Wednesday, March 17, with a between show at Danenbergers on Saturday, March 13.

The wee Irish folk combo of Rick Dunham and myself as McKinney & Hennessey do our mostly Clancy Brothers repertoire at Lime Street Cafe on Saturday, March 13 and Harvest Market Farmhouse on Wednesday, March 17. That's all the Celtic-based music I can dig up going on this Wearing of the Green weekend, but I wouldn't be surprised to see a few pop-up gigs happening and hopefully some regular bands will blast out an Irish tune or two. When it comes to St. Pat's shindig, you just never know what might happen and around here it doesn't really matter whether the bands play any Irish songs whatsoever, the partying is at full tilt.

Downtown at Frankie's Brewhaus, parade or no parade, things kick off early with Deep Lunar Blue at 10 in the morning followed by Mike Burnett and crew at 1 in the afternoon. Some familiar Springfield bands are back on track this weekend when The Groove Daddies cut a rug at Danenbergers, RockHouse opens up at the Main Gate and NATU knocks it out at Weebles, all on Friday night. Saturday continues the return of our staples when Deja Voodoo cajoles the Curve, NCR drives into Boar's Nest, Ultraviolet lights up Weebles, The Cocktails pour it on at George Ranks and Killer of Giants does Ozzy over-the-top at the Main Gate. And in a beautiful sight to behold, After School Special lands at Hand of Fate on the square in Petersburg.