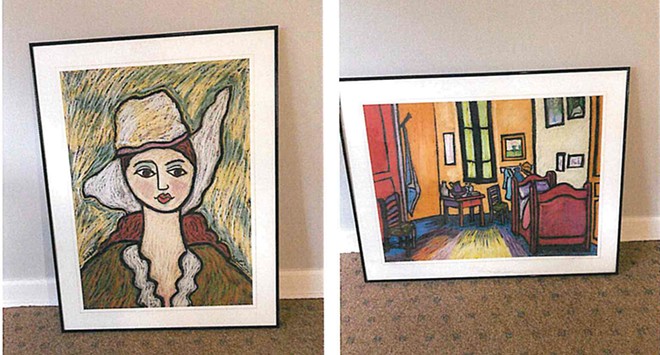 It wasn't Al Capone's secret vault, which proved an overhyped dud that held a few empty bottles and not much else.

This was more colorful – and valuable.

Chris Schaller, a former mortgage broker who awaits sentencing after pleading guilty to wire fraud last year in federal court, had a taste for artwork by the late George Colin, who made his home in Salisbury and died in 2014. Schaller was such a fan of Colin's work that he acquired more than 100 paintings, dozens of which now sit in the office of August Appleton, a Springfield lawyer who spent years battling Schaller in Menard County Circuit Court on behalf of Dan Fricke.

Fricke, who sued in 2017, pegged Schaller as a con man before the state Department of Financial and Professional Regulation revoked the mortgage broker's license in 2018 and a federal grand jury issued an indictment in 2019 that was made public last spring. In his lawsuit, Fricke says he thought that Schaller had loaned him money when, in fact, the former mortgage broker had taken over ownership of his land, then obtained a mortgage on the property. In other cases, prosecutors say, Schaller falsified paperwork to obtain mortgages for clients who didn't qualify and told other people that they were getting mortgages when, in fact, they were signing contracts for deed and turning property over to Schaller.

George Colin, who died in 2014, worked fast and was prolific.

The Colin paintings once graced Schaller's office on Greenbriar Drive, according to Fricke's lawsuit. Diamond Residential, according to the lawsuit, claimed that the art belonged to the company and that a $125,000 settlement Fricke received, plus a $1.27 million fund established with money from Diamond to make Schaller's victims whole, should have concluded the matter. Not so, Fricke argued.

The case, Appleton says, was settled amicably last summer. "As part of that, I took possession of the paintings for Dan Fricke – basically, they were in storage space, and I have a fairly large office," he says. "I took a few for my fee for getting them out of the storage place and getting them to a safe place." Fricke, Appleton says, also picked out a few paintings for himself.

What's left is now up for liquidation. Dave Bourland, who owns an art gallery near Clocktower Drive, has taken possession of several, which remain wrapped in plain brown paper. Bourland figures each painting is worth about $600, which would put the value of the collection at about $60,000.

Colin worked fast and was prolific. A Lanphier High School graduate who worked at Pillsbury Mill for nearly 30 years before becoming a full-time artist in the mid-1970s, Colin became a folk art star. During the 1980s, Georgeart, a Chicago gallery, was devoted to Colin's work. Fans include Sen. Dick Durbin, and Oprah Winfrey and Michael Jordan are said to own Colin's artwork. Jubilation, a 1989 album by The Band, features a Colin painting on the cover. Colin also painted furniture and syrup bottles and bowling balls and practically anything he could get his hands on. He once told the Chicago Tribune that he'd paint a cat if he could catch one.

Appleton says that he plans to keep a painting of an orange dog and yellow cat. Call it serendipity.

"I have an orange cat and a yellow dog," the lawyer says.