A plea for African-Americans to get screened for diseases 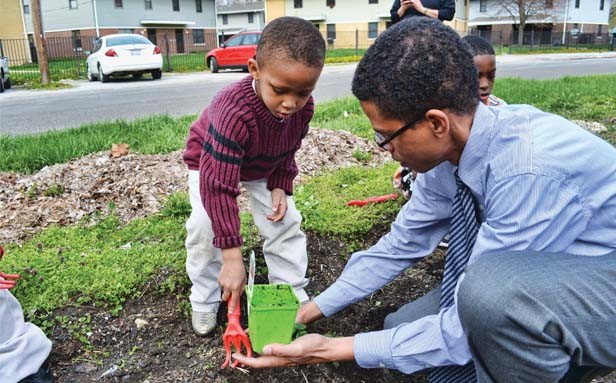 A diagnosis with stage three Hodgkin lymphoma at the age of 12 led Julius Simmons of Springfield to make a lifetime commitment to health and medical research.

While urging a Springfield audience to get more involved in minority health issues, Simmons, now 42, said he learned there was little medical knowledge about the causes of cancer and its effects on his fellow African-Americans. Because of this void, he has participated in numerous cancer research studies throughout the years.

Residents were welcomed to free health screenings including glucose, blood pressure, cholesterol and HIV/AIDS. Testing and screening was done by Wellness On Wheels, a program funded by the Illinois Department of Public Health Center for Minority Health to bring health care to families who don’t have access to screenings and testing.

Dr. Wesley McNeese, executive assistant to the dean for diversity and multicultural and minority affairs at the SIU School of Medicine, said African-Americans are reluctant to participate in medical research because of a lack of health care and education about diseases. He also said a large number of African-Americans don’t trust researchers. “There’s this history of mistrust in the African-American community so we have to convince them that situation is no longer the same and when they come into these kind of research projects that they’re going to be treated well,” he said.

He encourages people to get involved to keep research balanced. “If someone comes up with some cure or treatment for cancer and they use only white subjects to come up with answers, then they may come up with answers which are not relevant to us African-American people,” he said.

Simmons, executive director of the Springfield Community Federation, said as a child there was little medical research on children suffering from cancer. He also said that his family had dealt with cancer diagnoses before his, but his experience caused them to become more aware of their health.

He said he has become more involved in his health by changing his eating habits and his lifestyle and that through research he has learned how to take care of himself. “I can’t stress enough how important enough it is to get African-Americans participating in cancer research. It takes a sampling of the population to have an effective research program.”

For 38-year-old Hollie Morgan of Springfield, health has become a part of the discussion for her family as her children get older and learn about different diseases.

“As I’m trying to be a role model for my children I brought them with me so they could see that you don’t have to be afraid of getting your blood pressure checked or getting tested for viruses. There are a lot of people who don’t and they end up with diseases,” she said.

As part of the health initiative, Simmons took children from Brandon Drive to a community garden and helped them plant strawberries. He said taking time to encourage others to be involved in their health is important to him.

“I know and have experienced what can happen if you don’t watch your health,” he said. “It’s something as a cancer survivor that you’re constantly aware of.”

Giving them something to strive for