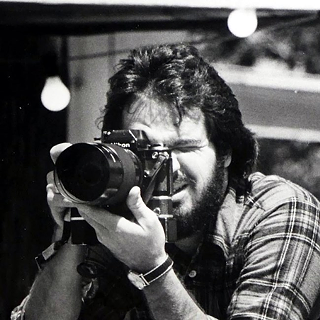 Before becoming editor of the paper, Locher was a photographer at the State Journal-Register.

Barry Locher was plenty smart, but not the smartest. He was funny, but not the funniest. He was one of the best photojournalists in the state. Others, also, took great pictures.

Barry was genuine, and on that point, he had no rival. He rose from photography intern to editor of the State Journal-Register, running the newsroom from 1999 until 2007. After his death from cancer, his wife Debra says that she received cards from people Barry photographed years after he stopped taking pictures to become a boss.

“He was just a down-to-earth person who could relate to people with no effort at all, and that always showed up in the pictures he ended up with,” says Rich Saal, former SJ-R photo editor. “People respond to the person who’s taking their picture – you can tell a person’s manner by the pictures they take.”

Photographers aren’t supposed to run newsrooms – editors should be wordsmiths, not picture takers. But Barry was special.

I was the last person Locher hired. He wasn’t supposed to do it – the State Journal-Register in 2006 had money budgeted for a graphic artist, not a writer, but a few days after lunch at Lime Street Café, he made me an offer I couldn’t refuse: You’ll have no beat or quota, and I promise I’ll never publish a story until you tell me it’s ready. The money wasn’t bad, either.

Less than two years later, he took a parachute, one year after the paper was sold to present owners who have suffered through financial crisis along with the rest of the American newspaper industry. He once oversaw at least 50 employees plus their egos, building and nurturing a news operation that became a Pulitzer Prize finalist in 2003 for stories about racism and immigration in Beardstown. Barry envisioned and guided the project, bringing in Lynne Walker, a Spanish-speaking writer who’d worked in Mexico and California, to get to the core of a small Midwest town, whether good or ugly. He did not want to preside as economic realities made that kind of work nearly impossible at papers the size of the SJ-R, which have been hit hard by buyouts and layoffs. Pink slips weren’t Barry’s thing.

Barry grew up in Roodhouse, where his father managed the local IGA store. He was an SJ-R lifer, landing summer internships in the 1970s while studying journalism at the University of Missouri. Former sports editor Jim Ruppert, who started at the newspaper about the same time as Locher, recalls him drinking beer and playing poker after deadline with co-workers in a South State Street house where a copy editor with poor housekeeping skills lived. “It was a dump,” Ruppert recalls. “Barry was very single, and he had a really fast car. He’d use it to get to assignments. He’d get speeding tickets – oh my god, he’d get speeding tickets.”

He paid one in coins. “He had this envelope that must have weighed 10 pounds,” Ruppert says. He could be impish. A light in the SJ-R darkroom was string activated – you knew just where to reach to tug the dangling line that switched the bulb on. It was Barry’s idea to cut the string, an inch or so at a time, until a fellow photographer, alone in the dark, finally figured out that he’d been pranked. “It was harmless, but it was fun,” Saal says. “He didn’t take himself so seriously. He was just a lovable character.”

Locher gave photographers the space they needed. “It was done when we decided it was done – it was done when we knew that we couldn’t get any more out of it,” Saal remembers. Barry wasn’t a pushover. “He’d chew asses if he had to,” Ruppert says. But that didn’t happen often.

“He knew how to get his way without saying ‘Here’s who I am and you’re going to do it my way,’” Ruppert says. “He just had a way of knowing how to get along with people, and that was really important in how he made his way up the ladder.

Sometimes, it’s hard to work with a guy you came up with who jumped over you. With him, it was easy. In sports, we’d call him a players’ manager.”

Barry chewed me out once, but just barely. The late John Schmidt, then Sangamon County state’s attorney, had called. I apparently had come off as rude when asking why I couldn’t get copies of search warrants. “We can’t have this,” Barry explained. I’ll do better, I promised – did he say why we can’t get warrants? Barry paused, then said, “No.” Months later, the story ran as part of a series on hurdles in obtaining public records. Schmidt, who eventually allowed me in his house for a Christmas party, reversed course and made the records public.

After leaving the newspaper, Barry got a job in public relations at Memorial Medical Center, then became director of the Illinois Press Foundation, a nonprofit arm of the Illinois Press Association, a trade group. Both were good gigs but no comparison to running a newsroom. Barry, who retired in 2016, missed what was gone and thought about what might have been. Opportunities he’d hoped for after departing the SJ-R didn’t materialize. The world had not as much use as it should for someone who listened and thought and told the truth and laughed at himself and kept venison sausage in the darkroom freezer and ate chicken at the VFW and believed in journalism and Springfield’s daily as much as he believed that the sun would rise tomorrow.

There was insufficient market for genuine – Barry, perhaps, had cornered it long ago. I never had a better friend. Contact Bruce Rushton at brushton@illinoistimes.com.