A plan to combat homelessness 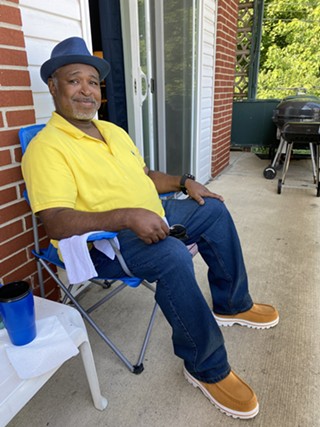 PHOTO BY DEAN OLSEN
Springfield resident Ricky Reese was homeless for six years and has lived in his own apartment for two years since then.

Springfield needs to create 765 more "permanent housing opportunities" over the next five years – more than triple the number currently available – to address and intervene in an ongoing increase in homelessness.

That's one of many ambitious goals in a draft of a strategic plan to eliminate homelessness in the area.

The 25-page report, "Heartland HOUSED: Springfield & Sangamon County's Strategic Plan to Address Homelessness," also points out the need to raise about $500,000 more annually to hire and maintain a half-dozen or so professional staff needed to help carry out strategies.

The study was guided by a steering committee representing Springfield and Sangamon County governments, health-care systems, other nonprofits and community residents and will be finalized in late November. Details of the plan, and ways of submitting reactions to it, are available at bit.ly/springfieldhomeless.

There have been several efforts to address homelessness in the past, most recently Helping Hands of Springfield's failed effort in 2019 to establish the Center for Health and Housing in the 500 block of South 11th Street.

The report proposes a "strategy board," "lived-experience advisory board" and housing task force to knit together elected officials, social-service agencies, business leaders and homeless or formerly homeless people in ways they haven't worked together before so they can be more effective at raising funds, carrying out programs and reducing resistance to solutions.

By growing empathy and communicating better to address neighborhood concerns, the "not-in-my backyard" sentiment, known as NIMBY, toward people who are unhoused and services to assist them could ease, according to Josh Sabo, coordinator of the Heartland Continuum of Care. The Springfield organization advocates for the homeless and spearheaded the study.

"Part of what we're trying to do here is get the community to reimagine how homelessness should be addressed here, which is how it's addressed in effective communities, and that's by housing," Sabo said. "There's a lot of new infrastructure that's being built out to really try to hit the goals that are in this plan.

"NIMBY will never go away," he said. "At the very least, people will have accurate information about exactly what a project will be and won't be, instead of working off misconceptions about what will take place."

"We recognize that emergency shelter is a crucial need, and so we want to make sure we have that resource available, that it's low-barrier, that it can accommodate the need that our community has, but we want it to be based on our data projections that anticipate growing housing resources," he said.

The report was put together with $160,000 from governments, health-care providers, nonprofits, the Springfield Housing Authority and philanthropic groups in Sangamon County.

Three of those six positions, the executive director, housing navigation coordinator and data administrator, already are filled and supported with local governmental and United Way funding.

The report points out that about 260 people are experiencing homelessness at any point in time in Springfield, and about 1,100 homeless people will be served by homeless programs in 2022. If no changes are made, the number served will rise to more than 1,900, an increase of about 70%, by 2027.

According to the report, 746 people enter the "local homeless system of care" each year, and 591 leave, leading to a net annual growth of 155 in the homeless population, the report says.

It's unclear what impact the COVID-19 pandemic has had on homelessness, and it's unclear why the problem is getting worse, Sabo said.

But what's obvious is the lack of progress in developing significantly more permanent housing for the homeless and accompanying support services, he said.

One statistic presents a "telltale sign that we have a stuck system," Sabo said. Only 7% of people who experience homelessness in Springfield ever access homeless housing resources, the report says.

The additional units would help the community reach "functional zero" when it comes to homelessness, or the ability to meet the permanent housing needs of new clients in the system within 30 days, Sabo said.

Black and Hispanic people are disproportionately represented among the homeless, so the strategy board and the Continuum of Care board, which will lead the plan's implementation, "will use an anti-racist framework of operating, and all board members will receive training and support to be trauma-informed and anti-racist," according to the report.

Making sure to include people who have been homeless will ensure the plan's strategies will work for that population, Sabo said.

Springfield resident Ricky Reese agreed. Reese, 57, who was homeless for six years and has lived in his own apartment for two years since then, said he is encouraged by the report's recommendations and plans.

Homeless people and those who used to be homeless can contribute much to solutions, he said.

"They would love to share their experiences, Reese said.

In addition to housing units, more supportive services should be provided by people who understand the experience of homelessness so those who gain permanent housing don't become bored and return to bad habits such as drinking and substance abuse, he said.

"It's a process," Reese said. "You can't go from homeless to being in your own home. You have to be ready. You've gotten comfortable once you're living on the street. You have to learn to pay bills again. You have to fill that time."