After a thousand columns, it’s time for a break 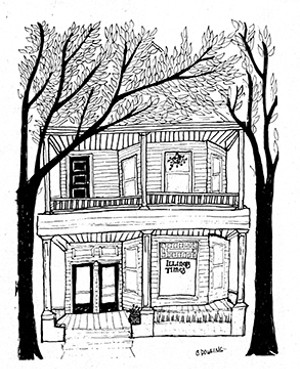 Drawing by claudia dowling
The first home of Illinois Times, at 512 S. Eighth Street, now demolished, where Jim Krohe’s column began.
This week’s column is the 1,000th to appear under my name in this paper, and I’ve decided it’s time to take a break from weekly opinion-mongering. After so many essays, even I am getting tired of hearing myself talk. Besides, I have been working on what I believe will be a very interesting book about Illinois politics and politicians that is way behind schedule and needs my full attention. I don’t intend to quit, however, and my name is likely to appear in IT from time to time as events compel comment. Old habits die hard.

Certainly there are plenty of things left to opine about. Readers often ask me how I come up with topics for columns, like it’s hard to do. On my PC is a directory titled “Possibles.” In it are files on possible topics in which I store news clippings, excerpts from my reading, bits of flotsam collected while web surfing and errant thoughts. At the moment I have more than 2,000.

Not everything in these digital junk drawers can be fashioned into viable columns, and not all of it probably ought to be. Among the latter are lots of unfinished columns about capital-letter topics like Pensions and Capitalism and Tax Policy and Democracy and Law and Home Ownership. I write such pieces out of a sense of duty, but all the reader gets for helping me soothe my social conscience is boredom.

That still leaves lots of lower-case topics that might amuse either me or my readers. (It is a rare topic that does both.) I have the makings of a column on wind in central Illinois in the form of wind maps from the state natural history survey and wind energy stats and David Foster Wallace’s memoir of playing varsity tennis in Philo in Champaign County, where “weird zephyrs and stirs join breezes and gusts and thermals and downdrafts and whatever out over Nebraska and Kansas, and move east like streams into rivers and jets and military fronts that gather like avalanches and roar in reverse down pioneer ox trails toward our own unsheltered asses.” Alas, there’s a fair amount of wind in that passage, which illustrates the problem; our winds are not as distinctive as, say, the Gorge winds that scour Portland, Oregon. Truly, it’s a dull wind that blows no writer to good.

I saved an article by an associate professor at John Jay College of Criminal Justice who argues that we ought to bring back flogging as an alternative to prison time; I agree, but haven’t been able to whip it into shape.

Patrick Leigh Fermor warned apprentice hikers that one should never drink rainwater that has collected in a bear’s footprint, no matter how thirsty one is. Fascinating, but hardly relevant to life as it is usually lived in Springfield, unless the same is true of water collected in aldermen’s footprints. I don’t get paid enough to risk finding out.

While fossil hunting along the Saladillo in the Argentine pampas, Darwin met natives who, innocent of geology, concluded from their deep-lying bones that mastodons must have been burrowing animals. That’s a Rauner metaphor if ever I saw one, but I’d really rather write about mastodons.

Because of national population shifts, Illinois is no longer the heart of the heartland, but increasingly a backwater – a new South. The topic has potential, but the implications of the premise are too obvious to need explaining, and I’m trying to stop explaining the obvious. We have NPR for that.

A piece to be titled “Springfieldians Abroad” got as far as this opening line: “I know Springfieldians who have been to Paris more often than they have been to, say, Mattoon, but can anyone really appreciate Paris who does not know our Mattoons?” This claims an expertise I don’t have; better to wait until I see Paris. And Mattoon.

“That’s what I hate about the South” – I’ve been looking at this one for years, but I’d have to reduce 54 pages of clippings to 800 words, and I believe that if you can’t say everything not nice about something, you shouldn’t say anything at all.

In “Sharp-dressed man” I planned to recall famous Springfield snappy dressers (V. Y. Dallman and John Knapp, to name only two) with asides about Lincoln (about whom it could be said that the man makes the clothes) and my own youthful career as a runway model. I learned that Albert Myers, one of the founders of the Myers Brothers department store, walked to work each morning sporting a derby hat, spats, Italian silk grenadine necktie and Malacca walking stick. I thought his example might be a model for a new kind of downtown beautification program.
S
peaking of neckties: I got it into my head in 2010 that every grown man ought to know how to tie knots properly, in order to secure a boat, lash down a cargo or turn two pieces of rope into one. I never learned, of course, so the column lies at loose ends, so to speak.

Pieces about architecture and buildings are waiting in line too. It will probably include an appreciation of S.A. Bullard’s 1893 City Hall on Seventh between Monroe and Capitol, where stood the handsomest ensemble of buildings in Springfield. (The others were the old YMCA, the Carnegie Lincoln Library, First Presbyterian Church, Prince Sanitarium and Grace Lutheran Church – all but two now gone.)

One of these days. Maybe soon. maybe later. Who knows?