A new Dawn at the Statehouse?

What are the statues on the Capitol lawn for? 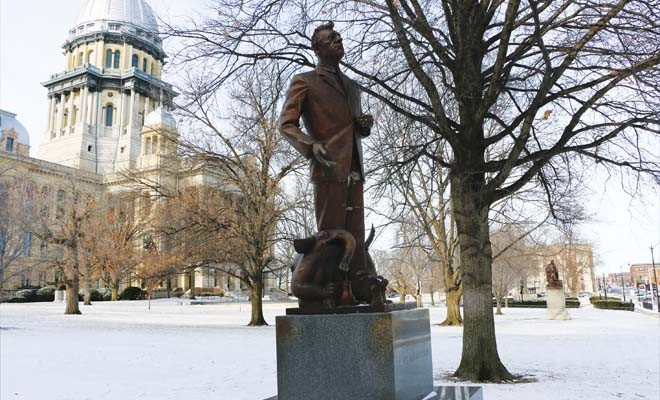 His readers voted yes by roughly two to one. For myself, I’d rather the members of the General Assembly imitate her example rather than pay to imitate her person, but if the latter ever comes to pass, questions need to be asked. Are statutes still the best way to memorialize important public people? Who should decide who deserves memorialization? By which criteria?

Netsch deserves remembering not as an original but as an exemplar of a type. The Statehouse has been graced by many such lawmakers over the years. (People old enough to know who Tom Cole was will recall names such as Robert Mann, Abner Mikva, Paul Simon and Anthony Scariano.) If we accept – as I think we should not – that “woman legislator” is a valid subcategory, Netsch was merely the latest in a long line of patrician “helpful ladies” of the 1900s progressive lineage that began with Bloomington’s Florence Fifer Bohrer, the first woman elected to the Illinois Senate.

Before the state puts up a new statue to anyone, they need to clean house. I read in November that the long-term plan for the Statehouse grounds now being drawn up would collect the memorials now there and relocate them along a new Memorial Row, where they would be more accessible. Faithful readers of this space will know that I would prefer that most of these 14 works be put where they would be less accessible – like a landfill. (See “Faith, hope and statuary,” April 5, 2012.)

That opinion was based on their artistic merits, but questions of history also attach to them. I suggest that the Statehouse statues be rethought, not just respositioned. The mere presence of a statue in such a privileged setting tacitly endorses the significance to the state of the person, group or event it memorializes. Yet how is significance defined? Is the Statehouse and its grounds a gallery of figures significant in the nation’s history? That of Illinois? The State of Illinois? Who makes the calls?

The O’Connor Lincoln is the largest work at the Statehouse, but while Lincoln was a great politcal leader from Illinois, he was not a great Illinois political leader. We have a 9/11 memorial but nothing that commemorates the terrorist campaign in Illinois by Illinoisans against Illinoisans in the early 1800s, when Illinois settler/soldiers raided Potowatomi villages in the Peoria area.

Fur trader Pierre Menard was a one-term lieutenant governor. A “taker” by any defnition, who thus died a rich man, he was put on the ticket because half the Illinois voters in 1818 were Frenchmen. He would be long forgotten save for the statue, which was paid for by the rich son of a business partner.

What about virtue? The Economist asked recently, “Should discredited figures be memorialised?” They are in Springfield. Stephen Douglas died in 1861; engraved on the base of the statue is his dying admonition to his children, “to . . . support the Constitution of the United States.” That would be the Constitution that perpetuated slavery, as Douglas labored mightily to do.

The state’s own brochure tells us that the elephant, donkey and oil can that flank the figure of Everett Dirksen symbolize “his persuasive skills to get both Republicans and Democrats to cooperate and enact vital legislation.” He used those skills to get a great deal more terrible legislation passed. Ol’ Uncle Ev was a hypocrite who would say anything to get a vote. Remember him if you must for the Civil Rights Act; I remember him for Red-baiting Havana’s Scott Lucas – a Dirksen friend and Senate colleague and one of the best public servants central Illinois ever sent to Washington – to take Lucas’s Senate seat in 1950.

Me, I would happily replace a dozen Douglases with a Jane Addams. Instead of an Indian supplicant seated at the feet of Menard, put an Indian on his own two feet. Historian Gillum Ferguson writes of the Potowatomi leader Gomo that he was “one of the most notable men, red or white, of his generation in Illinois, and it is sad to reflect that there is no memorial to him in the state except the name of a single short street in Peoria.” Sad indeed. An official collection of art of any kind ought to demonstrate not only what kind of place Illinois is, but what kind of of place it wants to be.