‘A neat and appropriate address’

Lincoln’s farewell to Springfield as a Guinness gag 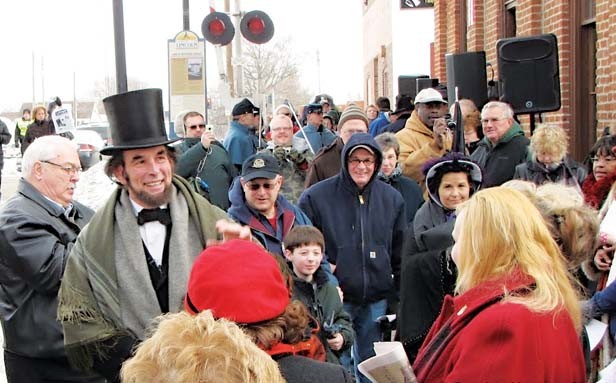 When I lived on the east side in the 1980s, I often walked past the building now called the Lincoln Depot on my way to and from downtown. Many’s the time I found myself having to wait while a freight train ambled down the track, and to kill time in that pre-Kindle age I read (for maybe the hundredth time) the words on a cast bronze plaque that adorns a stone marker nearby.

Those words are, more or less, the ones that were spoken from the back of a train by Abraham Lincoln as he made his farewell to what biographer William Herndon described as a “goodly throng” of fellow Springfieldians on Feb. 11, 1861. Few people make formal farewells when they leave Springfield for a better job in a bigger city, but we can probably assume that Lincoln’s remarks were not typical. Among our public people, few of our departing governors could have risen to such eloquent regret, but then few governors felt about the city the way that Lincoln did. They merely stayed in Springfield, while he matured in the city where he also found a mate and founded a family and made a career for himself as both attorney and politician.

The speech is usually described as “touching” or “bittersweet.” (Herndon, ever the eccentric, described it as “neat and appropriate.”)

Journalist Jamie Elizabeth Stiehm recently observed very prettily that he “laid his gratitude down like a bouquet” at the leave-taking. Certainly his remarks at parting were generous to his hometown, which is partly why it has been reproduced on a wall of the Lincolns’ tomb and adorns Andrew O’Connor’s statue of Lincoln at Second and Capitol as well as the marker at the Depot. And why so many of his fellow townspeople gathered there on Feb. 11 to help try to set a new Guinness world record for the most people reading aloud from the same document simultaneously by reciting it.

The result could have been a babel. There are in fact three farewell speeches, or rather one speech in three versions. One consists of the speech as delivered, or least as written down on the occasion by a reporter for the old Illinois State Journal. Herndon used the Journal’s version – Herndon himself was not there to make his own notes – in his account of Lincoln’s last day in Springfield, but it is hardly ever read or reprinted these days. A second version is another journalist’s account, this one published in Harper’s Weekly some two weeks after it was delivered.

The third version was recorded by Lincoln himself (with the help of his secretary) on the train just after he delivered it. It pretty plainly benefited from the author’s second thoughts. Lincoln’s edited version is only three-fifths as long as the one the Journal reporter heard. This caused problems in pulling off the Guinness gag; as the rules require that readings must last at least five minutes, and the 150-word Farewell Address had to be read three times to qualify – an absurdity that might have been avoided if the participants had simply read it v-e-r-y s-l-o-w-l-y.

But should it be? If one is offering the speech as an example of Lincoln’s eloquence, then his final edited version – clearly intended for publication after the fact – is appropriate. If the recitation is in commemoration of the event, then shouldn’t the speech that is used be the one that was actually delivered from the train? After all, the building that was the site of the recitation isn’t the building that was actually there on that day, the Lincoln Depot having existed in several versions since it was built in the 1840s.

Oh, well. As they like to say down at the State Board of Education, it’s only history. I’m all for anything that introduces the speech to a wider audience. I am old enough to remember when brighter students were expected to memorize Lincoln’s Gettysburg Address. I’ve often thought in the years since then that it is the farewell that Springfield children ought to know by heart – which is an interesting phrase, by the way, and one that is peculiarly apt in this case.