A New Berlin man who admitted to pointing a handgun at state Sen. Elgie Sims as the two were driving separate vehicles in Springfield in March 2021 was sentenced to nine months of probation on Aug. 17.

Cadagin ordered Hoyle, 55, to complete 60 hours of public service within eight months and not possess a firearm or other weapon while on probation.

Sims, 51, told The State Journal-Register in 2021 that he feared for his life and believed that the incident may have been triggered when Hoyle, whom he didn’t know, saw the legislative license plates on his SUV. 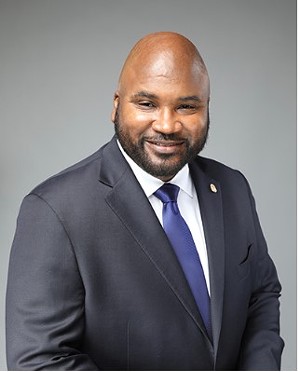 Assistant Police Chief Joshua Stuenkel said there wasn’t any evidence Hoyle was upset with Sims because of Sims’ job as a lawmaker.

Hoyle’s attorney, Scott Sabin, said on behalf of Hoyle after the sentencing hearing: “It was time to put this matter behind him. This is a logical conclusion to this case. He doesn’t have to be branded a felon. … He’s ready to accept responsibility for his actions.”

Wright said in a statement: “The defendant’s acceptance of responsibility and conviction of aggravated assault with a firearm concludes this case. The victim was actively involved and approved the terms of this plea.”

Sabin said Hoyle, the president and owner of Kwik-Wall Co., 4650 Industrial Drive, Springfield, which supplies moveable walls and partitions throughout the country, is declining comment.

Hoyle’s motive in the incident remains a mystery.

Sabin wouldn’t comment on a motive other than to say: “We’d rather look forward rather than reflect on what caused this to occur. He just wants to be a responsible business owner and doesn’t want his actions to affect his employees.”

Hoyle was arrested the same day Sims told police Hoyle pointed a loaded handgun and threatened the senator while the two were westbound on Lawrence Avenue about 8:15 p.m. on March 15, 2021.

Sims, a lawyer, said the incident began when he was driving alone from the Capitol complex to his home on Springfield’s west side where he spends time during legislative sessions.

Sims and Hoyle, who was driving a pickup truck, were westbound on Lawrence Avenue, with Hoyle behind Sims, when Sims said Hoyle began beeping his horn and turning his lights on and off.

Sims said Hoyle pulled in front of Sims’ car and slammed on his brakes. Sims then slammed on his own brakes, called 911 on his cellphone, took a picture of the pickup’s rear license plate and pulled next to the pickup.

According to an SJ-R story, Sims rolled down a window of his car and informed Hoyle that he was calling 911. Hoyle then pulled out a handgun, pointed the gun at Sims and said, “Let’s go,” according to Sims.

Sims said he drove away, proceeded west on Lawrence and then turned south onto Chatham Road. He said he saw Hoyle driving behind him on Chatham Road and holding the handgun outside the pickup but not firing it.

Hoyle was arrested shortly afterward on North Bradfordton Road, north of Old Jacksonville Road, and police said they found a .40-caliber handgun inside the pickup.

Sims was a key sponsor of criminal-justice reform legislation in 2021 that eliminates cash bail in 2023 and eventually will require body cameras for all Illinois police officers.

The Chicago Tribune reported in early August that Sims was approached by the FBI in its investigation of potential “influence peddling” by Axon Enterprise Inc. The Tribune reported that Axon, an Arizona law-enforcement technology company, hired law firm Foley & Lardner LLP to lobby the legislature. Sims is an of-counsel attorney at Foley.

According to the Tribune, “Investigators are looking into whether Axon – either directly or through other lobbying entities – improperly tried to influence Sims in his official duties as a member of the Illinois Legislature working on the criminal-justice legislation."

His attorney, Thomas Anthony Durkin, said in a statement to IT: “There is a good reason federal investigations are required by law to be secret. It is to protect people who have not committed crimes. Senator Sims has committed no crime and has not been charged with any crime. Obviously, someone not happy with this historic and long overdue crime-reform bill – and many in law enforcement are unhappy – is baselessly attempting to smear Senator Sims’ good name and hard work by leaking this investigation.”