Stage's entertaining character has little skill and a lot of luck 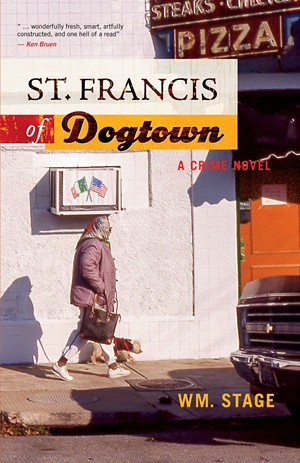 St. Francis of Dogtown, by William Stage. Floppinfish Publishing
In addition to his writing career, William Stage's personal biography includes a unique life. In addition to military service in Vietnam, Stage served with the United States Air Force Reserve during Operation Desert Storm. After graduation from college he was driving ambulances in Grand Rapids, Michigan, when he was recruited by the Centers for Disease Control and assigned to the St. Louis City Health Department as a public health officer. In St. Louis he ventured into additional careers as a feature writer for local newspapers and magazines, leaving the CDC in 1982 to devote himself full-time to journalism and photography. St. Francis of Dogtown, his fourth work of fiction, is easily his most enjoyable novel yet. The plot is fast-paced and characters so entertaining that when the novel concludes readers can easily contemplate future sequels and adventures for the title character, Frances Lenihan.

In addition to a collection of short stories, Stage's fiction work includes Creatures on Display, a mystery loosely based on his experience with the CDC and No Big Thing, a fictionalized account of an actual legal case in Missouri involving the Ku Klux Klan and the Missouri Adopt-A-Highway program. I reviewed them both in Illinois Times and found them to be enjoyable and entertaining novels.

St. Francis of Dogtown, starring Francis X. Lenihan, clearly establishes that William Stage has hit his stride as a mystery novelist and a chronicler of St. Louis and surrounding Missouri suburbs. Springfield readers will even appreciate the cameo appearance of our own Abraham Lincoln Presidential Library in an interesting plot twist that my aversion to "spoilers" demands I mention no further, other than to indicate it involves a Lincoln letter. Francis Lenihan is not a hard-boiled private detective or police officer. He is simply a process server struggling to make a living. He is an endearing and complex character wading through many dicey situations with a small amount of skill and a great deal of luck. Along the way he encounters quite a few entertaining friends and evil adversaries. Stage apparently has some experience in Lenihan's line of work. One of his nonfiction books is The Practical Guide to Process Serving.

Lenihan's work takes him across the city and through surrounding counties. Readers will recognize the myriad locations where he toils. And anyone who has visited St. Louis during the summer will appreciate his observation that "...if it weren't for the heat and crime, St. Louis would be the ideal place to live." One afternoon Francis's employment takes him to a quiet rural subdivision of the city to a home where a killer is leaving just as Lenihan pulls up to serve a subpoena. Soon thereafter police deputies from two counties question Francis about any information he might have regarding the murder. Francis helps the police as much as he can but he is unable to provide them with a critical item of evidence, the license plate number of the suspect's car. Francis is drawn further into the investigation when the victim's daughter, Rose, asks him to investigate the murder in the hope that he might find her mother's killer and justice will be served.

The traditional cast of characters is all present in St. Francis of Dogtown. Criminals of various degrees of skill as well as police officers working diligently to solve a brutal murder. A great deal of investigation occurs across county lines throughout Missouri but the one common venue seems to be local taverns, one of which finds customers offering Francis drinks as payments for his singing Irish songs. Francis is a charming and loveable character for whom readers will be rooting early in the novel. While the story comes to a somewhat harsh and violent conclusion, it is a suspenseful and enjoyable mystery. Hopefully we haven't heard the last from Francis Lenihan.

Stuart Shiffman is a frequent contributor to the pages of Illinois Times.