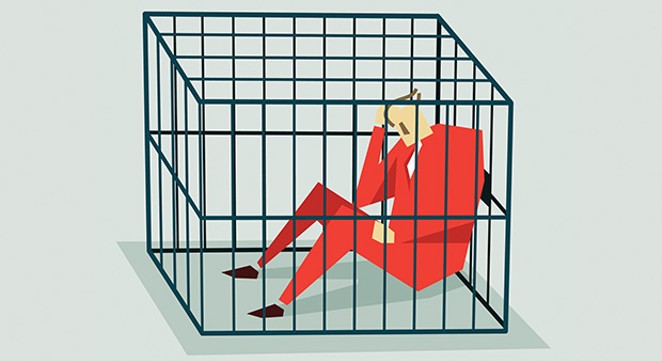 The inmate was mumbling. Shaking. Clearly in a psychotic state and whispering about a black hole.

The black hole had already demanded, and received, his blood once, the inmate told Dr. Pablo Stewart, a psychiatrist who visited Pontiac Correctional Center last fall to determine whether the state was abiding by a settlement agreement crafted to improve care for mentally ill inmates. Now, the inmate told Stewart, the hole wanted more blood. Stewart says that he turned from court-appointed monitor to clinician, attempting convince the inmate that the black hole wasn’t real.

After a few minutes, the inmate was returned to his segregation cell, where mentally ill inmates who misbehave spend as many as 23 hours a day locked up alone, Stewart testified this week in U.S. District Court in Peoria. It could be worse. Inmates deemed seriously suicidal are sent to crisis cells where they are restrained to beds without mattresses, legs spread and shackled down, Stewart testified, their arms shackled and extended above their heads, as if stretched out on medieval torture racks.

“You get cramps and charley horses,” said Corrie Singleton, a Pontiac inmate who testified that he’s been so restrained seven or eight times for as long as 72 hours at a stretch since September. Once every two hours, guards loosen restraints, one limb at time, for eight minutes, Singleton said. He always picks his left arm. His right arm, Singleton explained, is dislocated, and so it is strapped down near his side instead of pinned down over his head, next to his left arm.

Testifying telephonically and fresh from a straitjacket, Singleton said Tuesday that he has been on suicide watch for six days after swallowing batteries. He had been allowed a shower and a chance to brush his teeth just once during that time, he testified in a flat voice, blinking little as he stared into the camera. He said he last had a one-on-one session with a mental health counselor in September.

“Yes, your honor,” answered Singleton, who is due for release in July.

“Do you know what medication you’re on?” the judge inquired.

“No, your honor,” Singleton said.

Singleton is the face of a mental health disaster in Illinois prisons, according to attorneys for inmates who’ve been battling in court since 2007, attempting to force improvements. Inmates in 2015 agreed to abandon a consent decree, hoping that Gov. Bruce Rauner’s offer to settle the case without a decree would result in faster change. That, according to the plaintiffs, hasn’t happened, and so they’re back in court hoping for a judicial order to enforce the settlement agreement.

An inmate identified only as Tyler committed suicide in October after unsuccessful attempts in April and July that resulted in no significant change to his written treatment plans, which contained no mention that he had attempted to take his own life, according to Stewart’s testimony and court exhibits. Entire pages of the treatment plan form describing Tyler’s condition and what should be done to help him were left blank, and that’s typical, Stewart testified.

“This isn’t an outlier,” testified the doctor, who told the court that treatment plans routinely contain boilerplate language that doesn’t change from inmate to inmate.

Approximately 900 of the 1,100 inmates in segregation in state prisons are mentally ill, according to court records. Mental health professionals who check on mentally ill inmates must shout at them through small openings in cell doors that preclude inmates and those who are supposed to help them from seeing each other, Stewart testified. It’s a vicious cycle, with segregation cells making sick inmates even sicker, which prompts more misbehavior, which results in more segregation time. They cut themselves and smear their bodies with feces. The state last spring began giving mentally ill inmates more time out of segregation cells by shackling them to chairs in front of big-screen televisions that show movies, which Stewart acknowledged is progress.

Backlogs of inmates whose visits with mental health professionals or psychiatrists are overdue run into the thousands, Stewart testified. The state has determined that 66 psychiatrists are needed to care for inmates, but fewer than 35 are employed. Inmates get psychotropic drugs without any follow-up to determine whether drugs are working or whether side effects have developed, Stewart testified.

Dr. Michael Dempsey, who left his post as director of psychiatry for the Illinois Department of Corrections last spring, testified that Wexford Health Sources, the company that holds the contract to provide health care to inmates, has asserted that there have been no side effects from psychotropic drugs given to inmates. That’s statistically impossible, given the number of inmates who are receiving drugs, Dempsey said. Either Wexford isn’t telling the truth, he testified, or assessments to detect side effects aren’t being done properly.

Andrew Ramage, a Wexford attorney who was in the gallery taking notes, said that the company does not comment on pending litigation.

Side effects can range from dangerous changes in blood chemistry to thyroid and kidney disorders to involuntary body movements that can prove irreversible, Dempsey and Stewart testified. Wexford psychiatrists are evaluating inmates remotely with laptops that show patients from the chest up, so it’s impossible to detect involuntary body movements caused by psychotropics, Dempsey said.

Psychotropics can induce thirst, and Dempsey said he once encountered an inmate with schizoaffective disorder who was drinking so much water that his cell had become uninhabitable due to urine. The patient’s chart showed that he’d been receiving twice the maximum allowable dose of a psychotropic, with no explanation, even though the drug had not improved his condition, Dempsey said.

“I had to go to Wexford and say ‘Will someone look into this?’” Dempsey testified. “Anyone should know what the maximum dose is.”

Wexford employees also are giving doses of drugs too low to do any good if patients refuse pills and so are injected by force, Dempsey said. In at least one case, Dempsey said he found that Wexford employees had substituted an injection of Ativan, a benzodiazepine, for a psychotropic drug that is not in the same class of medication. Dempsey said that Wexford officials told him that incorrect doses were given by injection to give patients an “incentive” to take their pills. “That, to me, makes no sense,” Dempsey testified.

Saying that they are not prepared, attorneys for the Illinois Department of Corrections have postponed their response to the push for court intervention, and a hearing has been set for February. But Melvin Hinton, a psychologist who is IDOC’s chief of mental health, acknowledged serious issues, including his own lack of knowledge.

“Even though you’re the head of mental health, you don’t know the budget for mental health?” asked Harold Hirshman, an attorney for the plaintiffs.

“Do you think it’s important for you to do your job to know how much is being spent?” Hirshman queried.

“But you don’t have that information?” Hirshman asked.

“They don’t give me that information,” Hinton said.

Hinton also acknowledged that the department doesn’t have a centralized database to track treatment or the number of mentally ill inmates in segregation or crisis cells. He also agreed that mentally ill inmates, for fear of being overhead, are reluctant to talk about their problems by shouting through openings in cell doors to mental health professionals. While recruiting efforts to hire more psychiatrists haven’t been successful, Hinton pointed out that a full-time psychiatrist has been hired at Galesburg’s Hill Correctional Center.

“One person is going to solve the problem?” Hirshman inquired.