A matter of perspective

Springfield as portrayed in panoramic maps 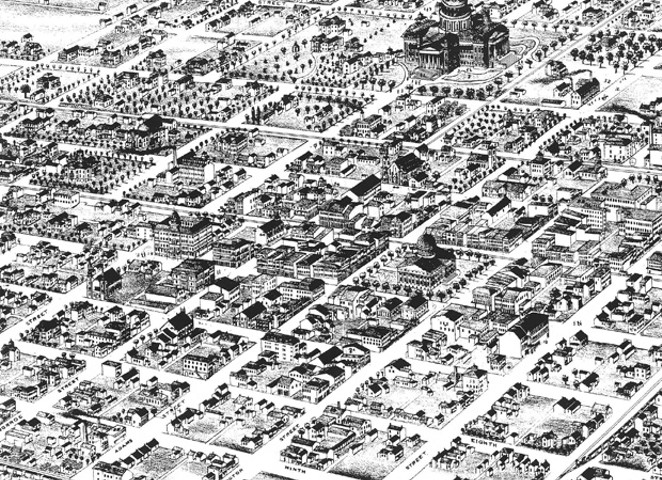 Springfieldians are always trying to get above themselves. As I noted in “Seeking the scenic in central Illinois” (Aug. 19, 2010), something must be seen to be scenic, and seeing the landscape in a flat land requires the breadth of perspective that verticality affords. One of the charms promised by the Rauner-backed North Mansion Y-Block Development Group is a 12-story clocktower/observation deck, from which rubes which wish to get high might enjoy a unique view of the Statehouse – “unique” in this instance meaning inferior to that view offered from the 30-story Wyndham hotel four blocks away.

Our honorable civic ancestors struck upon a way to have such a perspective of the whole city without building follies. On the wall overlooking my desk is a map of Springfield. It is a reproduction (offered a few years ago by the Iles House as a fundraiser) of the “Bird’s Eye View of Springfield” drawn in 1872 by artist Augustus Koch. It is a map of the city as it might be seen today from a small airplane, depicting not only streets but, nearly, every house, factory and church.

Our friends at the Amon Carter Museum of American Art in Fort Worth tell us how Herr Koch went about his trade. He blew into the booming capital – in this particular case Austin, Texas – and proposed to the local newspaper to produce “a tangible expression of the city’s new-found pride. “A story and an ad soon appeared in the newspaper, announcing that the ‘New Map of Austin City, Mounted and Varnished, showing the whole government of city and out lots’ was available for a price of $5.”
I
llustrated panoramic maps of this kind were in vogue in that era. Every town of any pretension commissioned one to show the world. (Think Chamber of Commerce economic development brochure.) The Library of Congress alone boasts more than five dozen such maps from Illinois alone. Springfield is remembered in two of them. A version of the Augustus Koch map hung for years in the old quarters of the Sangamon Valley Collection at Lincoln Library;  an 1867 view of Springfield by Albert Ruger, another major maker, can be seen on the LoC web site at https://www.loc.gov/item/73693374/.

Each map took weeks to draw. If not always triumphs of the draftsman’s art, these maps are triumphs of imagination, the angle at which the scene is reproduced revealing the town as if the artist had sketched while perched in a balloon far above the ground. A preparatory study of local atlases, maps and land records (to establish the context) was followed by tramping the streets making sketches of hundreds of individual buildings, but at no point did Koch actually see the city from any point higher than a few stories.

The old bird’s-eye maps, published as contemporary documents, are by now historical documents of some considerable interest. For the cover art of my history of mid-Illinois, I suggested using part of an 1884 map of Mattoon by J. W. Smith. (https://www.loc.gov/item/73693208/) It was mid-Illinois summed up in a single image, from the distant horizon to the town crowded on all sides by cultivated fields, the rectangular street grid slashed by rail lines trailing off into the distance. Even better, Smith hand-colored his Mattoon in sumptuous tones.

The maps, while accurate in their essentials, were not, indeed could not, be literal depictions of a town of 17,000 people. Archaeologists of the National Park Service recently surveyed the site of the Henson Robinson house in the Lincoln home area. Koch showed the house with two one-story extensions off the rear and an outbuilding on the alley. But, said the archaeos in their report, “depictions such as these may be idealized.” Well, sure. No portrait photographer tries to make a customer’s child look ugly. Koch’s Springfield was a faithful portrait in the same way that, say, a Rauner budget accurately resembles a real one. Every house is clad in bright white boards, the trees in the orchards  are all miraculously the same size and open spaces are unspoiled by rubbish piles and weeds, all seen through air unsullied by coal smoke.

Such maps are still being made. If Koch and Ruger were mapmakers who occasionally produced art, Richard Schlect is an artful illustrator who occasionally does maps. One of these was his bird’s-eye view of the Lincoln home neighborhood looking toward the northwest he drew for the NPS in 2000 or so. Historically accurate and lushly colored (Springfield in full make-up) the map has been widely produced in NPS brochures and websites; it appears too on the cover of Bonnie Paull and Richard Hart’s 2015 book, Lincoln’s Springfield Neighborhood.

Some enterprising organization should follow the example of the Iles House and offer the Schlect map for sale as a framable print. It would appeal to the antiquarian, the Lincoln buff and the Springfield patriot, and why not? The town never looked better, then or now. Having that map on your wall would change your perspective on Springfield.