A martyr or a menace? 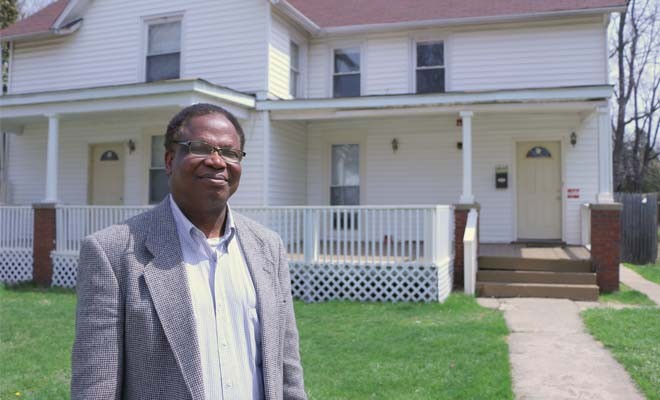 Correction: This article previously stated Mr. Elugbadebo has three group homes. It has been been amended to reflect the fact that there are only two group homes.

On the second, third and fourth Wednesday of each month, Jeremiah Elugbadebo can usually be found in Springfield’s drab city council chambers, waiting for his turn in front of the city’s administrative court.

In his thick African accent, Elugbadebo defends himself against a barrage of alleged zoning violations at the two “group homes” he operates on North Fifth Street in Springfield under the name Joyce’s Community Home for Adults. The homes house people with mental and physical disabilities. Elugbadebo’s frequent appearances in front of the administrative court stem from city building inspectors citing his buildings for everything from bedbugs to bad electrical wiring. While Elugbadebo shrugs off the violations, the Enos Park Neighborhood Improvement Association says they are proof his homes should be shut down.

In person, Jeremiah Elugbadebo is friendly, animated and prone to smiling. Now 66, he moved to the United States in 1981 from Nigeria and became a U.S. citizen in 1994. He says he earned a bachelor’s degree from the Southern Illinois University in Carbondale before moving to Springfield to get a master’s degree in gerontology from the University of Illinois Springfield.

Elugbadebo says before he started his group homes he was a social worker for what is now Mental Health Centers of Central Illinois, United Cerebral Palsy and SPARC. He says he started Joyce’s Community Home because he saw a need for housing that accommodates people with mental and physical disabilities.

The two group homes at 1010 N. Fifth Street and 911 N. Fifth Street are large houses that hold an ever-changing mix of people with mental disabilities, mental illnesses and physical disabilities. The people come from McFarland Mental Health Center in Springfield or other facilities, and many of them live on Social Security payments. Elugbadebo says he doesn’t handle the residents’ Social Security checks; instead, his residents have designated payees who pay their rent to him each month. He previously had a contract with the Illinois Department of Corrections to house prison parolees, but he says he quit doing that because the state couldn’t pay him regularly.

Springfield building inspectors have cited Elugbadebo’s properties on several occasions for a variety of alleged violations, including no carbon monoxide detectors, no fire alarms, no door alarms, inadequate door locks, gas cans and other combustible materials in the basement, an extension cord used as permanent wiring on a freezer, broken floor tiles, peeling paint, broken and dirty appliances, broken windows, cockroach and bedbug infestations, and too many people occupying a house, among other alleged infractions. City inspector Paula Zink has issued the majority of the citations.

When Elugbadebo receives a citation, he appears before the administrative court. The court usually grants him time to correct the alleged violation, sometimes granting him multiple extensions spanning several months. Elugbadebo typically fixes the violation and sometimes pays a fine of a few hundred dollars.

Elugbadebo says some of the citations are overblown. He says the bedbug citation was the result of one person bringing bedbugs from another location, and he had the whole house sprayed once it came to his attention. When a problem arises, he tries to address it as soon as he has enough money, he said.

“I’m not telling them not to do their job, but they have to see this situation, what I’m doing here,” Elugbadebo said. “It’s good for them to clean the neighborhood and do what they need to do, but they lump me up with bad people.”

During a visit by Illinois Times to the house at 1010 N. Fifth Street, at least seven people sat idly in the living and dining rooms. The house was sparsely decorated and appeared livable, although clearly dated. The kitchen featured beat up appliances, at least one missing cabinet face and locks on the refrigerators and some of the cabinets. Elugbadebo explained that the locks are to keep the residents from eating all of the food at once because he says several of them have addiction problems.

“If I leave sugar out on the counter, they mix it in water and drink it all,” he said. “Some of them don’t know when to stop, so they eat everything if you don’t limit them.”

He said none of the residents are starving, and he makes sure they eat regularly.

Elugbadebo’s operation seems to fall into a regulatory gray area, and he believes he doesn’t need a license because his houses only offer room and board. Several state agencies denied having any right to regulate group homes, and the City of Springfield doesn’t have an ordinance or other mechanism to restrict such operations. Todd Greenberg, the city’s corporation counsel, says the city can enforce basic living standards through housing and zoning codes, but if the city were to pass rules to regulate housing for people with disabilities, it may risk running afoul of the federal Fair Housing Act.

Greenberg says the citations against Elugbadebo are only allegations until they are proven in court. That rarely happens because Elugbadebo typically fixes the situations that led to the citations before the administrative court refers his cases for prosecution.

“Assuming we were able to show to the satisfaction of some finder of fact that there’s a violation, does that mean we could shut it down?” Greenberg said. “That’s a whole separate issue. Most of the time, what the courts do is permit governments to fine people for bad behavior, but in terms of actually taking their property away from them, that’s an entirely different issue. Usually, we would have to go across the street to the (Sangamon County) court and prove that there have been so many repeated violations of record. It’s only if we can do that where we could get some sort of injunction from a court. So we’d have to prove that fines haven’t been a sufficient deterrent.”

Greenberg says if Elugbadebo’s alleged violations of housing and zoning rules were not an issue, the city would have no problem with his group homes continuing to operate.

Michelle Higginbotham, president of the Enos Park Neighborhood Improvement Association, believes the alleged violations show that the group homes in her neighborhood should be closed.

“The master plan for Enos Park emphasizes owner-occupied, single-family homes,” Higginbotham said. “Since we began acquiring distressed properties three years ago, we have been able to pass on more than two dozen houses to new owners who are committed to the revitalization of the neighborhood. However, it’s hard for us to attract new families to the neighborhood when you have people who take what is meant to be a single-family residence and use it as an unlicensed, unregulated group home in violation of city zoning standards.”

“In both instances, you have a landlord who is taking advantage of people who have very limited options as to where they live and intentionally violating the city zoning statutes to maximize their return on investment by cramming as many people as possible into what is supposed to be a house for one family,” Higginbotham said.

Elugbadebo’s residents seem loyal to him, defending him against the city’s charges and even claiming Paula Zink is unfairly targeting him.

“Jeremiah takes care of us,” one resident said. “He’s a good guy and the city can take their opinions and cram them.”