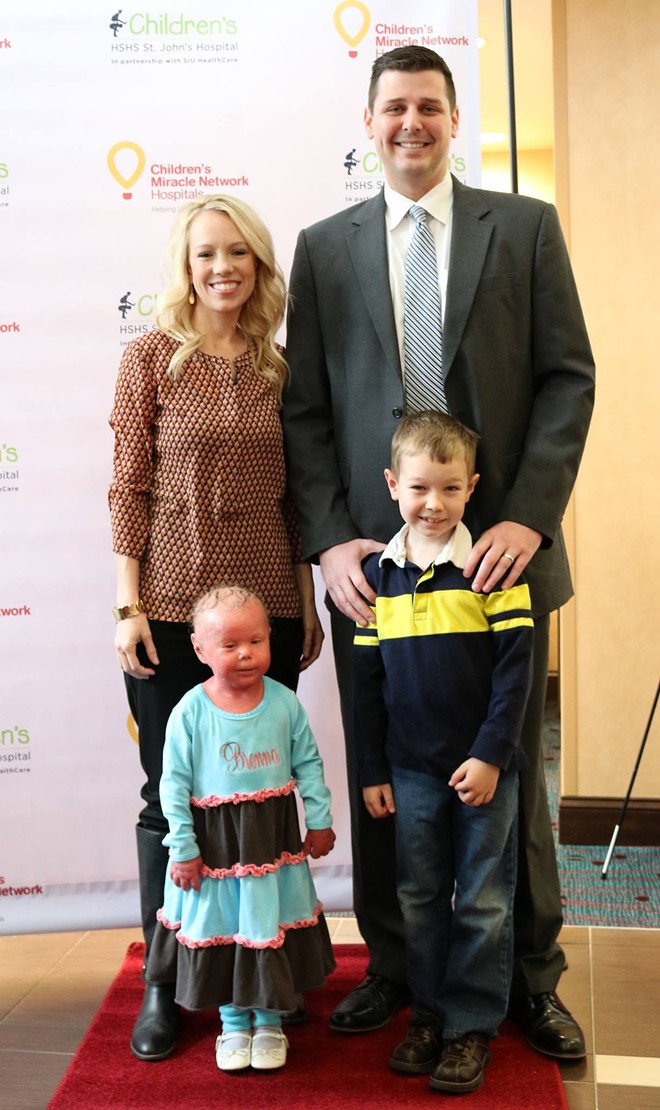 Brenna was recognized today as the Illinois Champion Ambassador for Children’s Miracle Network. Her parents, Courtney and Evan Westlake, held the child at a press conference in Springfield.

Harlequin Ichthyosis is a lifelong disorder that has no cure. It creates thick layers of skin that an affected person cannot shed quickly enough, so the skin usually appears to be reddish and tough because it lacks the ability to retain moisture.

The Westlakes must follow daily precautions to keep Brenna healthy. Brenna’s daily routine includes long baths so her skin can soak up moisture, allowing her parents to gently rub off all of the excess skin that has built up over a course of a day.

The disorder also leaves her vulnerable to skin infections and requires constant regulation of her body temperature because she cannot sweat.

In their speech today, the Westlakes recognized St. John’s Hospital for being one of their biggest supporters since Brenna’s birth.

“We will be forever grateful for the neonatologist and the NICU (neonatal intensive care unit) medical staff for their quick action and their critical care as we all learned more about Brenna’s rare disorder and how to care for it,” Courtney Westlake said.

Charles Lucore, St. John’s Hospital CEO, thanked the Westlake family for accepting the award, praising them for their devotion to get out and share Brenna’s story with other families.

“Our team at St. John’s Children’s Hospital is very proud to have helped Brenna overcome the serious medical challenges that she’s faced and continues to face,” Lucore said in a press release.

Brenna has endured multiple surgeries that required her to stay at the hospital for weeks at a time, but always with the St. John’s team and her parents by her side. At one point, Brenna had an open wound in her stomach and was scheduled to have surgery. Courtney Westlake said the medical staff supported Brenna by sending a music therapist to see Brenna that day.

“Having that music therapist there to sing with her and bringing her instruments to play was the only half hour that morning that she was not crying in pain,” Westlake said.

Brenna’s mom says that Brenna is currently enrolled in preschool, but she works one-on-one with a school aid.
Dave Newton, program director for the Children’s Miracle Network, noted that the Westlake family inspired him with their willingness to give back to the program and help other children.

Newton’s key moment of inspiration will come in February 2017, when the Westlake family participates in Momentum, the annual conference celebrating the Children’s Miracle Network champions across all 50 states in Orlando, Florida.

“For them to go through what they’ve gone through and then turn and want to help other children is inspirational,” Newton said.

As ambassadors, the Westlake family will travel to Washington, D.C. in June and Orlando, Florida in 2017 and serve as local, state, and national spokespeople.

“We are thrilled to be a voice to the wonderful work that our local children’s hospital is doing on a daily basis and for all the children who receive care in our state,” Courtney said.