A life of loving and giving, gone too soon 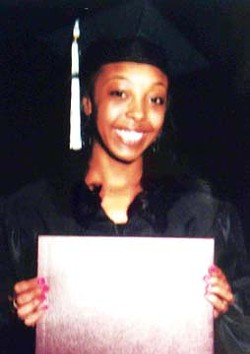 When Rosetta Bowen first laid eyes on her daughter, Helynda Thompson, 23 years ago, two words came to mind – angel face. From that moment on, Bowen looked forward to waking up each day to her beautiful daughter and her “trillion-dollar smile.” But on July 21, fate took that smile away.

The day began like any other day, with Bowen up early watching the news, while Helynda, who graduated from Southern Illinois University-Carbondale (SIU-C) last May with a bachelor’s degree in community health, enjoyed her last few winks of sleep before getting ready for her internship at the Illinois Department of Public Health. As minutes ticked away, Bowen realized that she did not hear Helynda getting ready for her job, as a community educator. When Bowen checked Helynda’s bedroom, she discovered that her daughter had died in her sleep.

“It was a shock,” said a tearful Bowen. “I was in disbelief. I couldn’t believe it.” Following Helynda’s death, an autopsy, complete with a toxicology report, was conducted. Officials ruled that her death was the result of “natural causes” – a ruling that makes Helynda’s death even harder to deal with.

“The hardest part is not knowing why she is no longer here. We’re not suppose to bury our children,” cried Bowen, adding that just a couple of years ago, she sat down with Helynda and explained to her daughter what she would need to do to make final arrangements for herself and Helynda’s dad, Leo Thompson. “I showed her all of the important papers that she would need, and walked her through everything. Not in a million years did I think that she wouldn’t be here to do it,” Bowen stated.

While Bowen, Thompson and Helynda’s five siblings continue to struggle to make sense of her untimely death, the family relishes the many memories they shared with Helynda during her brief life.

“She was one of the most loving and giving persons you could ever meet,” stated Bowen. “She was always sharing and helping others. If a friend or family member needed a ride somewhere, she would be there.” Just one week before Helynda’s death, a friend in the neighborhood was accepted to SIU-C. When it came time for her to register for classes, the neighbor did not have transportation to get there. Helynda took her to register and introduced her to a number of people who could assist her if she needed help. “That’s just the kind of person she was. She really loved helping people in the community,” Bowen said of her daughter, who was planning to begin working on a master’s degree in public administration at the University of Illinois in August 2011.

Helynda was the type of child all parents dream of having. She rarely asked for anything. And when her parents purchased things for her, she would often ask them to stop, stating: “I don’t need anything.”

Several years ago, after Bowen explained to Helynda that her mother needed to take early retirement, she phoned her parents the following day, informing them that not only had she found a cheaper apartment in Carbondale, she also found two jobs. “Don’t worry about the rent,” she told her parents, “I got this.”

At Helynda’s college graduation, she presented her parents with a certificate of appreciation for supporting her while she worked towards earning her degree. And even though Bowen’s birthday was months after Helynda’s death, while going through her belongings, Bowen found a birthday card that her daughter had purchased for her before she died.

Today, Bowen takes solace in the fact that she had an extremely close relationship with her daughter. “Even as she got older, she still wanted to hang out with me,” Bowen proudly stated. Though Helynda is no longer here, she seems to speak to Bowen when she is at her lowest.

Several days before Thanksgiving, Bowen dropped her cell phone. She was told by her provider that it would be a few days before her new phone arrived. Since she had not found the courage to shut off Helynda’s cell phone – the only gift she wanted for graduation – Bowen decided to use Helynda’s. Faced with the first Thanksgiving without Helynda, Bowen, who was feeling exceptionally low, woke up Thanksgiving morning at approximately 3 a.m. She soon came across a series of text messages that her daughter sent to a friend who had recently lost a loved one. Helynda’s text read: “I believe that God takes people so that those left behind will begin living a better life. There is no explanation. Just know that God doesn’t make any mistakes.”

Bowen: “The message was something that I needed to see. I know God has His own purpose. I have faith in God. I know that he does not make mistakes. And, I know I’ll see her again.”

Help and hope for autism

'He pushed people to do the right thing.'