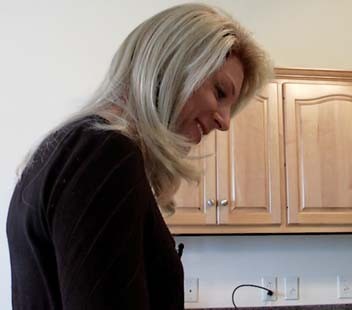 Springfield resident Shayla Thomas is featured in a transgender documentary airing next week on WILL-TV.

Tall and thin with long blonde hair, trim eyebrows and manicured fingernails, Shayla Thomas feels feminine. Given a passing glance, the Springfield resident, engineer, parent, two-time divorcee and friend, might look it too. But give her a closer look, and her face and body give away the fact that Shayla, according to genetics, is a male.

“My idea of being a woman is my perception through society of what that’s supposed to be. I don’t know what being a genetic female is like, because I’m not a genetic female. All my perception, what I feel, is what I’ve ingested from my interaction with society,” she says.

It’s that identity struggle that Shayla, along with two other downstate Illinois transgender residents, explains in the documentary film This is My Journey, by Kate Brickman, a Dwight native who finished the film this summer as part of a graduate program at the University of Illinois at Urbana-Champaign. The film will air on WILL-TV on Friday, Oct. 7 at 8 p.m. and will be featured at the Normal Theater’s LGBT (Lesbian, Gay, Bisexual and Transgender) film festival on Monday, Oct. 3, at 7 p.m. in Normal.

Brickman says her interest in the topic stemmed from her sister’s coming out as a lesbian when Brickman was 15 years old. “It was a big deal in Dwight, Illinois, to have a gay sister, but my parents didn’t even bat an eye,” Brickman says. “There were lots of questions at certain points along the way, and seeing how my parents accepted her really had an impact on me.”

“I think what I realized growing up in Dwight and the experience of my parents is you don’t like things you don’t understand,” she says. “Really good people who have been sheltered all of their lives can be hateful people.”

In creating the film, Brickman says she hopes to educate the general public on a topic even she, as an LGBT advocate, knew little about until she started working on the project. She says that in walking away from her first interviews with transgender people, she was struck by how normal their lives are.

Besides Shayla, the film features Cris, an Illinois State University student transitioning from female to male, and Dana, a middle-aged male from southern Illinois transitioning to female.

The differences in Cris and Dana’s individual experiences with transitioning show changing societal attitudes, says Brickman’s advisor at the U of I, Nancy Benson. She adds that the film fills a hole dug deeper by past documentaries that only promulgated negative stereotypes through portrayals of prostitutes and drug addicts. “Part of her [Brickman’s] goal was to remove that stereotype to show that transgender is not something that’s freakish. We’re all struggling to deal with identity and transgender is a category of that struggle.”

Shayla says she agreed to be in the film because education is the only way to change attitudes. “So many people just think we want to be out there and in your face, and that’s not at all what most of us want. Most of us just want people not to notice us,” Shayla says. “I just want to live my life in the way I feel like I need to live it, without being judged by people because I don’t look like they expect me to look.”