A genius in science, art and humor 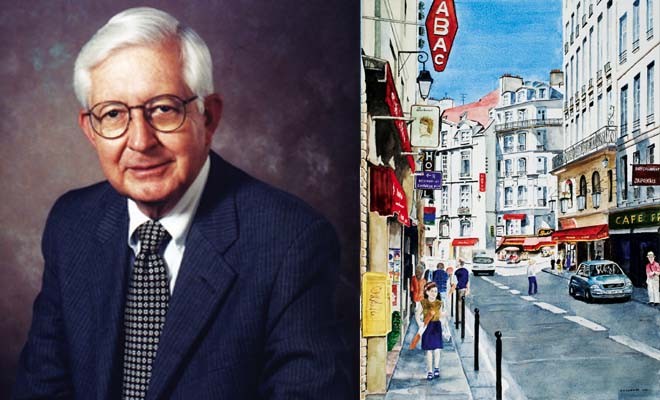 A beautiful Parisian streetscape, a sailboat race on the North Carolina coast, and a peaceful snowfall on frozen Lake Springfield: Those picturesque scenes and many more were the subjects of David Sumner’s vibrant and detailed watercolor and oil paintings. It’s fitting that the beautifully rendered scenes came from the same hands that performed countless precise surgeries in Springfield during Sumner’s 23 years as head of the Southern Illinois University School of Medicine’s Division of Peripheral Vascular Surgery.

Dr. Sumner died Nov. 24, 2013, at age 80 after a protracted battle with Parkinson’s disease. His contribution to Springfield and the world is a celebrated body of work, both academic and artistic.

David Sumner was born in Asheboro, N.C., in 1933. He earned his bachelor’s degree in chemistry from the University of North Carolina at Chapel Hill, then graduated in 1958 from the Johns Hopkins University School of Medicine. Sumner received his surgery training at the University of Washington in Seattle, then served three years in the U.S. Army, where he reached the rank of lieutenant colonel and researched the effects of frostbite. After completing his military service, he joined the faculty of the University of Washington before being asked in 1975 to start a vascular surgery department at Southern Illinois University School of Medicine in Springfield.  He stayed at SIU until his retirement in 1998.

Martha Sumner met her future husband at a Christmas party while David was a fourth-year medical student and Martha was a third-year nursing student. She recalls with a laugh that she noticed Sumner at the party with another woman and thought they made a nice couple.

“The next week, he called me and said he wanted to take me out,” she said. “It turns out this other woman was just a friend, and some of our mutual friends were trying to get us together.”

Martha says it was Sumner’s wit and humility that drew her to him – that and his “lovely brown eyes.”

“He had such a gentle air about him,” she said. “He always had a twinkle in his eye.”

The pair were married in 1959 and had three children who are now grown: Vance Sumner, John Sumner, and Mary Sumner Butler.

Roland Folse of Springfield is responsible for bringing Sumner to Springfield. Folse and Sumner attended Johns Hopkins together and completed their medical residency in Seattle together. By 1975, Folse worked at SIU School of Medicine, and he recruited Sumner, who was already an expert in the physiology of blood vessels, to start a vascular surgery department at the school.

“He was really a genius, and certainly a scholar in his research efforts,” Folse said, adding that Sumner was easy to get along with because of his laid-back personality and dry wit.

“He was extremely well-liked by everyone,” Folse said. “He was a great teacher. The students, residents and fellows that he trained are all extremely loyal to him.”

When David Sumner joined the school, SIU was still relatively new and was still establishing its reputation. Dr. Craig Backs of Springfield, who calls Sumner his mentor and friend, says it was a daring leap for Sumner and other doctors of that era to join a then-unproven medical school and help build it from the ground up. Although Backs regrets that he never got to scrub in for surgery with Sumner, Backs says Sumner was an intellectual giant at the school, writing an acclaimed textbook and numerous research papers.

“He was known for being very meticulous,” Backs said. “His operations lasted significantly longer than other vascular surgeons, but it was widely known that his results were second to none. His painstaking meticulousness paid off for his patients.”

“He was the very gentle, pipe-smoking, cerebral, soft-spoken guy who was just easy to listen to,” Backs said. “He was very humble and didn’t really put on the kinds of airs that his stature nationally would have justified. He was such an approachable individual, but he had high expectations of the people who were working with him. That was actually pretty easy, though, because he had high expectations for himself, as well.”

Like many others who knew Sumner, Backs recalls Sumner’s often self-effacing sense of humor.

“The legend always was that when he was operating, if something didn’t go exactly right, he would express with his Southern drawl, ‘Oh, why does this always happen to me?’” Backs said with a chuckle.

Despite his long fight with Parkinson’s disease, Sumner never complained or felt sorry for himself.

“He didn’t want it to define him,” Martha said. “He always kept going, so how can you not? He simply didn’t complain. That made it very easy for me to keep going, and he never got grouchy.”

Sumner’s strong intellect and attention to detail made him naturally good at many things, says Martha Sumner. He was completely self-taught at painting, for example.

“He thought that all surgeons should be able to paint because it’s essentially the same eye-hand coordination,” Martha said. “You can’t get in there and just dabble.”

Although Sumner was a talented artist, Martha says he didn’t want to be remembered for that.

“He never considered doing anything except academic medicine,” she said. “He adored research. It was his energy, and to him the art was just fun. His life was teaching. He was most proud of his writing and research and the people he trained.” –Patrick Yeagle