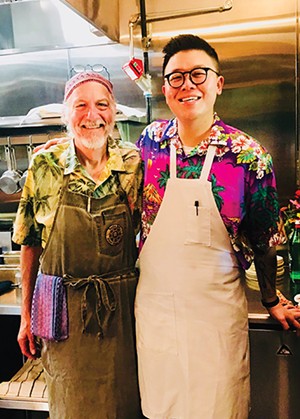 For months I heard stories about Chef Paul Wang. He's cooked at Noma in Copenhagen, considered by many to be the best restaurant in the world. He studied Buddhist temple cuisine with Jeong Kwan, a Zen nun and renowned cook who was featured in the Netflix series "Chef's Table." He has lived in a different city every year since he was 20, including Seoul, Los Angeles, Copenhagen, New Delhi and Tulum. Paul was recruited to help open Nonesuch in Oklahoma City, propelling it to be named "America's Best New Restaurant" by Bon Appetit magazine. He is brilliant, fastidious, blunt, demanding and uncompromising.

Paul had left Nonesuch before I started there and when I heard he was coming back to do a one-week guest chef residency, I was terrified. Nonesuch was my first full-time restaurant job, and because I lacked formal culinary training, I've been developing my cooking skills mostly by getting my mistakes corrected. This is an effective training method, but one that's very hard on the ego.

During the weeks before Paul's arrival, there was a heightened state of anxiety at Nonesuch. In restaurant kitchens, everything must be labeled with masking tape and a Sharpie. "Peter! Use scissors to cut the masking tape! If Paul sees you tearing the tape, he'll ream you a second asshole!" A brunoise is a knife cut that produces tiny 2 mm cubes. "Peter! Your brunoise is irregular! Paul will make you do it over!" "Peter! Tidy up your workstation! Fold your towel neatly or Paul will kill you!" I wasn't sure I would be able to survive his harassment. I seriously considered asking for time off the week of Paul's visit.

By the time Paul arrived, I had come up with a plan for my self-preservation. I would tell Paul that I was a food writer for Illinois Times and I wanted to write an article about him. I was hoping this would make him behave kindly towards me so that he would not come across in the article as a mean-hearted jerk.

In my mind, I had Paul pictured as a short, slender Asian man. My jaw dropped when an almost seven-foot giant walked in through the door. Smiling, immaculately dressed, he was the total opposite of what I had envisioned. I reached up to shake his hand, pitched my idea for an article about him, and invited him to dinner at my apartment the following Monday so I could interview him.

Paul turned out to be the brilliant, exacting, uncompromising chef everyone said he'd be, except towards me, he was not mean-hearted but rather kind. He continually micromanaged me, but in a nice way. "Peter, the dish I'm putting you in charge of is my favorite dish on the whole menu. I want every plate going out to be perfect." Whenever it wasn't, he would merely smile gently, slowly shake his head, and dump my food in the garbage. I learned a lot from him that week, and I survived with my ego intact.

For my article, I asked Paul for any pearls of wisdom he might have for home cooks. He gave me three: a simple hack to improve tofu, an easy way to clarify butter, and a versatile ingredient to keep in your pantry.

How to improve tofu

Tofu, by itself, is rather bland. For tofu to absorb the flavors of marinades, sauces and soup stocks, you must first draw out its flavorless liquid. Draining tofu under a weight is one way, but a more effective technique is to freeze it and thaw it. When tofu freezes, its water content turns into ice crystals that expand and create little spongy holes that remain when the tofu thaws and the ice crystals turn back into water.

To remove moisture from your tofu

Pour off the liquid the tofu came in.

Either leave whole or cut into smaller pieces and put in an airtight container or plastic bag and freeze.

When you are ready to use your tofu in a recipe, thaw it in the refrigerator, drain the liquid, and pat dry. Your tofu will be firm and ready to absorb your marinades and sauces.

Clarified butter is butter that has had the water and milk solids removed. This improves the flavor and raises the smoke point, which means you can cook things at a higher temperature without burning the butter. Clarified butter does not require refrigeration and has a long shelf life. The traditional method of clarifying butter involves melting butter over low heat and skimming off the milk solids. You then carefully ladle off the butterfat into another container and discard the milky liquid that remains in the bottom of the pan. Paul taught me a better way.

Suspend bag in a pot of simmering water, being sure it doesn't touch the bottom of the pan.

When butter is melted, remove the bag and place it in a bowl of ice water with one corner of the bag pointed down towards the bottom.

When the butter becomes solidified, cut the corner of the bag and drain off the water and milk solids.

Rinse the cake of butter in cold water and pat dry to remove any remaining milk solids.

I asked Paul if he had any special go-to ingredients to recommend and he told me to check out a Korean ingredient called Gochujang. Gochujang is fermented pepper paste, usually sold in red plastic tubs. It has a unique, moderate heat with deep, savory umami flavors. Because it's a semi-solid paste and not a liquid, it is usually blended into other things rather than being used as a condiment like sriraacha. Paul cautioned me to carefully read the label before purchasing gochujang. Cheaper brands contain corn syrup and artificial flavorings.

This Gochujang sauce can be used as a salad dressing, marinade or dipping sauce. It is spicy, tangy, sweet, savory and packed with umami.

Whisk all ingredients together until smooth.

Use as a marinade for proteins or as a dressing for salads.

Peter and Bertha Bus have signed on with World Central Kitchen's Chefs for the Polls to serve meals at polling locations around the country. Chefs for the Polls is a nonpartisan effort that will feed people of all political parties and beliefs. Please vote as if your future depended on it.