Iced is an engaging novel. It’s set in a fictionalized but recognizable central Illinois town that is known for the strong odor of its grain-processing facilities that some optimistically call “the smell of money.” The events of the novel are set against a backdrop of a town struggling with a protracted union strike, vanishing industry, diminished opportunities and methamphetamine abuse. 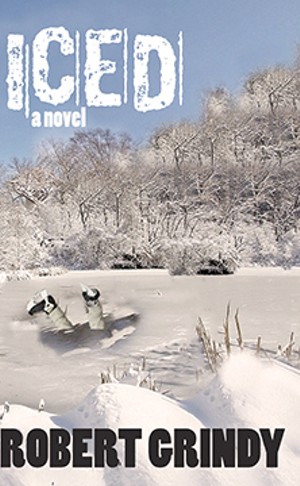 The central character, Henry Streator, is burned out. He misses his ex-wife, who left for a plum teaching job out of state. He’s stuck in their rundown house in his “little island town” of people “adrift in a vast ocean of corn and beans.” Each semester he faces another roster of students he barely tolerates. Students who turn in assignments late or rarely show up to class. Streator’s passion is writing, but he’s been blocked for years. Then he learns that a former student’s novel has made the bestseller list.

Streator is still seething from that news when a student hands in a story idea of a New Year’s Eve murder of the town’s richest man, who bears a striking resemblance to their town’s richest man. Then shortly after, the student is found dead in what appears to be a single-car accident on an isolated country road.

College administrators take notice of Streator’s bad attitude, as student complaints mount and his enrollments dwindle. They issue an ultimatum. With his job on the line, he can see only one way out -- to write something that will make money. The only idea he has belonged to his dead student.

Inspiration born of desperation spurs Streator to steal the idea and write the book. He sends it off to an agent friend and, as soon as he gets assurance that his book will be published, he gleefully resigns the job he’s grown to hate.

Then on New Year’s Eve, the richest guy in town turns up dead, feet up, fallen through the thin ice of a frozen lake, exactly the way the deceased student had predicted, and Streator plagiarized.

With no job, and his book deal in danger, Streator starts to investigate the two strange deaths. The professor’s curse of regularly running into former students can finally be used to his advantage. Many remember Streator from before his divorce, when he was an engaged and passionate teacher, and are willing to share what they know. This information leads him further down a road which may get him killed.

As Streator puts the pieces together, the plot picks up speed like a freight train of processed corn products headed to market. The book skillfully belies common mystery tropes. It’s laced with wry humor that’s relatable to anyone who may feel the midlife weight of mistakes made, time wasted or failing, so far, to live up to their own high expectations.

Streator discovers more depth in the community than his original cynical assumptions permitted. Good still exists in his stinky town on the prairie, enough perhaps for the professor to ultimately redeem himself.

Shawna Mayer is a writer of short stories, a poet and an editor. She lives in Springfield.

Iced is available at Books on the Square in Springfield, Novel Ideas Books and Gifts in Decatur, or online directly from Livingston Press, Amazon or Barnes & Noble.