A “D” for damnation

Preparing children for this world and the next is tricky 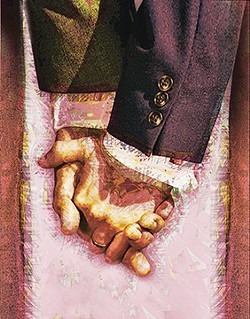 ILLUSTRATION BY RICK NEASE/TNS
ILLUSTRATION BY RICK NEASE/TNS
Ordinarily I would not trouble the Roman Catholic church with my opinions. Its sacred books are divinely inspired; my columns, alas, are not. I would happily take my nose out of the church’s business if it would stop sticking its into mine. Same-sex marriage is a civil matter, and it is the civil realm, not the celestial one, that I live in. The Most Reverend Thomas Paprocki, bishop of the Springfield Diocese, held a service at the cathedral in Springfield to exorcise the evil of the law permitting same-sex marriages from Illinois. Ancient spells don’t have much political effect in Illinois – cash usually works better – but the bishop went further in threatening Catholic elected public representatives with damnation for voting for civil same-sex marriage legislation. (He says such people are “morally complicit . . . in facilitating this grave sin.”) These are the actions of a politician, not a prelate, and Paprocki thus makes his views a proper subject of comment by poor sinners like me.

In July the diocese issued a new Family School Agreement after a same-sex married couple tried to enroll their adopted children at Springfield’s Christ the King elementary school. The children, as far as I know, were perfectly acceptable to the school. It is their parents that the church disapproved of. A diocese official reminded the press that, under the agreement, children in their charge are to be taught that parents living in ways that violate church teachings – gays, cohabitors, active pro-choicers – are living in sin. Tuition, it would seem, is the least of the costs of a Catholic education.

That’s a problem for Catholic school parents to sort out. I don’t question the right of the church to teach in its schools that gayness is a sin, although I do question its wisdom. Not that the church cares; religion is not about wisdom, it is about virtue. Still, the private search for virtue can have public effects. Alarmed by the arrival of immigrant “papists,” public school systems across Illinois in the mid-1800s propagandized pupils of all beliefs with anti-Catholic claptrap. It was not only Catholics who were harmed by state-sponsored anti-Catholic libels. A generation of Illinoisans raised to believe that Catholics were evil grew up to live in a state in which Catholics numbered among their fellow citizens. This was not exactly a good way to achieve civil comity. Indeed, parochial schools were founded largely to prevent non-Catholics from doing to the despised social outsiders of the day what Paprocki wants to do to the outsiders of his.

In 1873 a more enlightened majority of the Chicago school board voted to dispense with readings of the Christian Bible in that city’s public schools, agreeing with one Congregationalist minister that imposing the doctrines of one religion on the children of others was a species of tyranny and oppression not to be countenanced by a free people’s government. But oppression was exactly what many Protestants wanted. Catholic social gains played a part in triggering a revivalist movement among Protestants frightened that their grip on the next world and this was loosening, a revival that seems to me an awful lot like the revival of Catholic fundamentalism among our Paprockis confounded by new sexual and social mores.

Of course, public schools are obliged to educate children of all faiths or – let us not forget – no faith at all. If religious schools (of all types, not only Catholic ones) taught only the doctrines of their particular sect, I would say, well, “God bless ’em.” But such schools also presume to prepare their charges for life in the world, that is to say, our world. Our ever-more-numerous Christian madrassas dispute science not merely in its particulars, such as evolution or cosmology, but in its fundamentals. That leaves their pupils helpless to understand important subjects such as reproductive health. I’m not troubled by young people disagreeing with the scientific consensus about, say, climate change; I am troubled when their schools leave them unable to even understand it.

Public schools have their doctrines too. I suspect a great many non-Catholic parents feel about their kids being imbued with church teachings the way I feel about public school kids being obliged to pledge allegiance to one nation under God. The pledge is a reminder that the public schools, while nonsectarian, are not non-religious; they are as industrious in preaching the civic religion of patriotism as any Catholic school is in preaching that church’s doctrines.

Consider the new state law that makes instruction in “civics” a requirement for high school graduation. The intent is good, but the law also demands that kids be taught American patriotism, including the proper use of the American flag. Patriotism that is taught is not patriotism at all, but mere propaganda. “My country right or wrong” dispenses with informedness, with critical thinking, with the facts of our own history. That’s my idea of a sin.