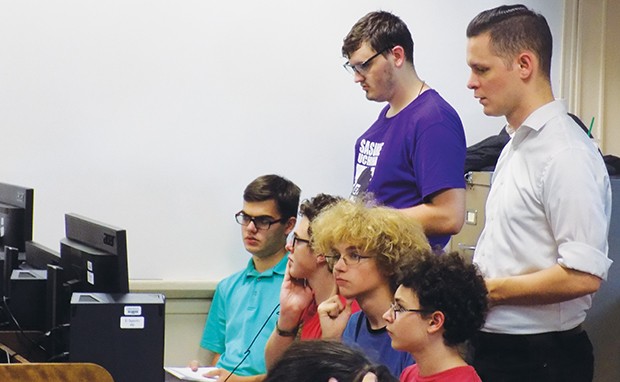 When I learned that esports have come to public schools for which I pay good money, I thought of Billy Mitchell.

Not the father of the Air Force who got court-martialed shortly before World War II after arguing with superior officers: Forget battleships and build aircraft carriers, he implored. He was dead before they finally gave him a medal.

The Billy Mitchell of more recent fame fell from grace last year, when Twin Galaxies, the closest the video game crowd has to a sanctioning body, announced that he no longer would be certified as the first human to score one million points on Donkey Kong. The ruling came after documentary filmmakers exposed shenanigans having to do with performance-enhancing circuit boards.

With this, plus usual stereotypes, in mind, I headed last week to Lanphier High School, where tryouts were underway involving Super Smash Brothers Ultimate, a game I had never before heard of, let alone imagined. I parked next to a field where a couple dozen athletes tossed and kicked and otherwise puttered with footballs. It was a pleasant fall afternoon. But not in a third-floor classroom, where nearly 50 high school students were gathered to prove prowess at a computer game featuring such cartoon characters as Jigglypuff (some sort of make-believe animal, I think)  and Piranha Plant (a creature resembling the offspring of a ladybug and a Venus flytrap).

Protected from September breezes, the classroom was sweltering – there is air conditioning, Dalton McGhiey, a biology and anatomy teacher who last year guided a nascent esports team to glory in a statewide tournament, assured me, but the HVAC system can’t handle so many kids in a room this size. Fewer than 10 of the students at tryouts today will make the team, he says, that ultimately will have no more than 78 players, with 20 slots reserved for each high school.

The kids weren’t obese and had tans consistent with spending as much time outside as anyone else. They waited two hours before breaking out Doritos, Ruffles and Cheetos while McGhiey figured whom to cut first. “If your name isn’t called, it doesn’t mean you’re not a good player,” he said before reading off names of students he wanted to see play again before making a final call. Several who didn’t make the cut stuck around anyway, watching games and chattering. “What’s your name?” one boy asked another at the end of a game that drew a considerable number of spectators. “That was really good.”

“They build relationships with people they never would have been friends with before,” McGhiey says. “There have been some bizarre friendships.”

Durick McNear, a Southeast senior, says his mom makes fun of his passion for organized gaming, but only a little. He also plays rugby. And hockey. “As long as you’re getting your schoolwork done, it’s all good,” he says.

Last year was the first for interscholastic esports in Springfield School District 186, where McGhiey put together a team with students from Lanphier and Southeast that won two events at a statewide championship tournament. Lanphier is scheduled to host a championship tournament next spring. McGhiey has persuaded Levi, Ray & Shoup to donate $10,000 for computers, and jerseys are on the way. The fledgling team is called the Capitols.

Esports, McGhiey says, offer chances for scholarships and seven-figure prizes, and so there is purpose beyond fun. Hundreds of millions of people are said to watch others play computer games, and Tyler “Ninja” Blevins, considered one of the world’s best players, makes a reported $500,000 per month from subscribers who pay to watch him play as much as 12 hours a day, according to Business Insider.

Esports have gotten the attention of the Illinois High School Association, where Curt Gibson, associate executive director, predicts the organization will soon be sanctioning seasons and tournaments, just as it does for baseball and football and bass fishing and chess. “The biggest hurdle is the initial raised eyebrows – we’re looking into getting into esports and people say, ‘Video games?’” Gibson says.

While esports is a coed endeavor, most players at Lanphier last week were boys. Sean Kenny, assistant esports coach, says he’s not sure why. “Coach” is somewhat a misnomer. Kenny, who teaches math and coaches wrestling at Springfield High School, confesses that he isn’t sure how to coach esports. Aside from suggesting what pretend characters players should choose to engage opponents, he allows, there isn’t much to do but cheer and worry once the games begin.

Eddy Merckx, arguably the finest cyclist who ever rode the Tour de France, put it succinctly when a reporter once asked what advice he had for young racers: “Ride lots,” he advised. The same is true for esports, where there are no calisthenics or drills that can improve performance, and so the Capitols will have regular practices, with at-home play expected. Judging from last Thursday’s tryouts, convincing kids to spend time at this shouldn’t be a problem.

“The only way to get good at it is to do it a lot,” McGhiey says.