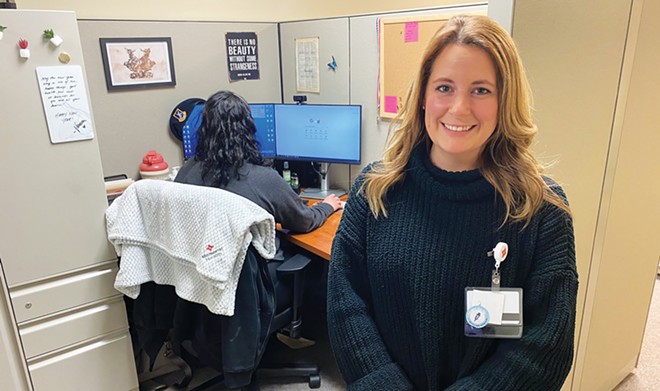 PHOTO BY DEAN OLSEN.
Amanda Rivera, supervisor of the Memorial Behavioral Health call center in Springfield, is pictured in front of one of the cubicles where the center’s counselors work. The center serves central Illinois callers to the nationwide 988 Suicide and Crisis Lifeline.

A depressed client who had intentionally cut herself made a call to the nationwide 988 Suicide and Crisis Lifeline. So did a man struggling with addiction.

When each person dialed 988, a lifeline operator named Vanessa, sitting in a call center run by Memorial Behavioral Health in Springfield, answered the phone. The comfort and empathy she tried to convey may have averted suicide in both situations, she said.

"It made me feel relieved and grateful," Vanessa, who requested that only her first name be published, told an Illinois Times reporter. "I let them vent and get everything off their chest. ... I try to keep them as calm as possible."

The female caller agreed to have an ambulance come to her home and bring her to a hospital. The man initially told Vanessa she would be the last person he would ever talk to. But after two hours on the phone, his mood lifted.

Nonprofit MBH, which has answered calls funneled through the national suicide prevention hotline for years, expanded its resources to do so in summer 2022 with federal funding connected to the July 16 launch of the three-digit crisis-care number. Callers previously had to dial a longer toll-free number – 800-273-8255 – which continues to operate.

MBH has received an annual federal grant of $417,365, which flows through the state, to operate the 988 call center. Springfield Memorial Hospital's foundation paid for cubicles, telephone equipment and related technology for the center.

MBH officials said they hope funding expands so the Springfield call center can be open seven days a week.

MBH President Diana Knaebe said the MBH center received 366 calls from central Illinois residents – including at least 184 from people in Sangamon County – in the first six months since 988 began. The number is expected to grow as more people learn about the number and its convenience. Calls to the number are free and confidential.

"The goal of 988 is to make it easier for people across the country to access mental health resources in times of crisis," Knaebe said. "You don't have to be suicidal to call 988. In fact, you could be someone who's concerned about someone else."

Officials at Springfield-based Memorial Health, the parent organization of MBH, said the 988 crisis line complements the agency's other crisis-response programs. They include services at the Memorial Behavioral Health Clinic in Springfield and MBH's Mobile Crisis Response teams.

The agency continues to operate its free "emotional support hotline" at 217-588-5509. That hotline began earlier in the COVID-19 pandemic and is for anyone experiencing anxiety or stress but not in the middle of a crisis, Knaebe said. The hotline is open from 8 a.m. to 8 p.m. Monday through Friday.

When in doubt, people going through a mental-health crisis, or their loved ones, should call 988, Knaebe said.

"Talking with somebody about it may help you, and maybe, if nothing else, give you some resources you can check out on your own that may be beneficial," she said.

Demand for mental health services through MBH has swelled during the COVID-19 pandemic, initially causing four- to six-month waits for counseling appointments, Knaebe said. After adding additional workers, the agency was able to reduce most waits to between four and six weeks, though demand is still up compared to pre-pandemic levels, she said.

However, pandemic-related stresses, such as job loss and illnesses, rarely come up as contributing factors in why clients call the crisis line, according to call center supervisor Amanda Riva. "I think it's a sub-factor," she said.

Call center operators "do our best to resolve the situation on the line," Riva said. "Someone's always going to answer that phone, and it's always confidential." Callers don't have to provide their names but are offered follow-up calls and referrals to other services, she said.

Over the past six months, MBH's staff provided 89% of callers all the help they needed over the phone, including follow-up calls, if desired.

Some were informed about The Living Room, a free MBH service that operates from 10:30 a.m. to 6:30 p.m. Monday through Friday. The Living Room offers a calm, safe space at 710 N. Eighth St., inside Memorial Behavioral Health Center, and provides immediate mental health support from peer recovery specialists. No appointment is necessary for The Living Room, which can be reached at 217-588-5272.

Two percent of callers were sent to hospital emergency departments, 3% of calls were handed over to 911 operators and 6% of callers were referred to MBH's Mobile Crisis Response teams, which respond to mental health crises.

Vanessa, the call center operator, had some advice for people considering dialing 988: "Call with an open mind."

She believes many people who could benefit don't call because of the stigma that can be associated with mental health.

"We're here to help," she said. "We're human. We're not going to sit there and be judgmental."