Sid’s secret and the charming history of Chicago football 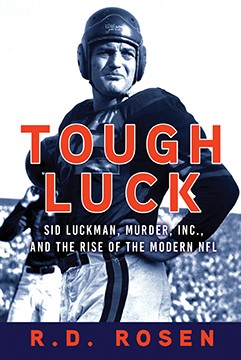 Tough Luck: Sid Luckman, Murder, Inc., and the Rise of the Modern NFL, by R. D. Rosen. Atlantic Monthly Press.
This year marks the centennial celebration of the Chicago Bears, an iconic founding franchise of the National Football League. While the team’s roots are found in next-door Decatur, where they first played as the Staleys, it was only after their relocation to Chicago that they became identified as a cornerstone franchise of the NFL. Over the course of the past 100 years the Bears have been spectacular, mediocre and downright awful. But to their fans they have always been the beloved Bears. They have captured nine League championships and one Super Bowl victory. They have also won more games than any other NFL franchise, retired 14 uniform numbers and have the largest contingent in the Pro Football Hall of Fame, with 27 players and coaches.

Sid Luckman, who came to the Bears by way of New York City and Columbia University, is one of the Bear Hall of Famers. Owner and head coach George Halas plucked Luckman from Columbia in 1939 to run his newly minted T-Formation offense. Tough Luck: Sid Luckman, Murder, Inc., and the Rise of the Modern NFL by R. D. Rosen is Luckman’s story, and a great deal more.

Sid Luckman came to the Bears carrying with him a secret that was headline news in New York City, but did not merit even one paragraph of coverage in Chicago. Meyer Luckman, Sid’s father was convicted of murder in 1935. The details of the gangland-style murder, as well as Meyer Luckman’s connections to organized crime, would play out in New York for decades. In Chicago this scar on the life of a Bear hero was a deep secret.

In 1944, when Meyer Luckman died while in prison, his obituary did not mention his football-playing son. Not until years after Sid Luckman’s death, while researching material for a Luckman biography, did R.D. Rosen learn of the events surrounding Meyer Luckman’s conviction. Perhaps Tough Luck is not the exact biography Rosen began writing, but it is a fascinating story of the NFL, its growth and one of its star players. And it is more than just a sports biography. Among the non-football cast of characters appearing in Tough Luck are Franklin Roosevelt, Thomas Dewey, Walter Winchell and enough mobsters for another Godfather movie. Rosen’s history is wonderful reading for a wide audience.

In professional sports, athletes often undergo cross-era comparisons. In many respects Sid Luckman’s career is most similar to New England Patriot Quarterback Tom Brady. Neither Luckman nor Brady was the most athletic quarterback of their era. Neither quarterback had the strongest arm. But both were winners. Sid Luckman’s career spanned 12 seasons during an era when professional teams employed far more running than passing plays. But Luckman’s passing records with the Bears are still legendary. Only recently did a Bear quarterback move past Luckman for career touchdown passes, and his seven touchdown passes in one game are still a Bear record.

The relationship between Halas and Luckman is one of the beautifully told portions of Tough Luck. It endured well past Luckman’s retirement. In 1983, as Halas was near death, he wrote a letter to his former player. “You added a luster to my life that can never tarnish. My devoted friend, you have a spot in my heart that NO ONE else can claim.” Luckman carried a copy of that letter with him for the rest of his life.

While Tough Luck is the story of the secret that Sid Luckman kept hidden, it is also an entertaining portrait of the growth of the National Football League from infancy to a multibillion-dollar enterprise. During Luckman’s career the game changed from one where players played both offense and defense and rarely left the field, to a game of specialization. When Luckman joined the Bears, college players were far better known than their professional counterparts and college games easily surpassed the professional games in attendance. By the time of Luckman’s retirement, the NFL was on the road to great national success.