Try these variations on a classic 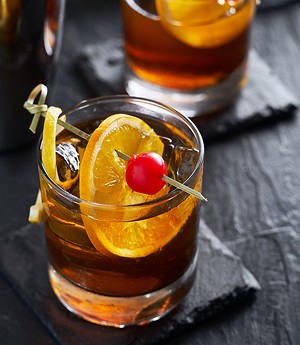 Anyone who's checked out the cocktail menu at a posh restaurant lately may have noticed that classic cocktails are very of the moment. Perhaps we have Don Draper to thank, the enigmatic leading man on the TV show "Mad Men." It's hard not to thirst for Draper's drink of choice as he sips from a glass studded with a slice of orange and cherries. An Old Fashioned, as it has come to be known, has a history that predates the age of swanky Madison Avenue ad agencies.

The very first cocktails were made by a standard formula: one of sour (like lemon juice), two of sweet (fruit juice, honey or sugar), three of strong (booze) and four of weak (tea or wine, later seltzer or soda). The end of the 19th century saw a huge growth in the creation and development of a range of cocktails. Before long there were some who yearned for the older style and so they would order a cocktail in "the old-fashioned way," basically a single serving punch of sorts. At this time making a cocktail in the "old-fashioned way" involved macerating a sugar cube with some form of bitters, then adding about two ounces of a base liquor such as gin, whisky or rum, which would finally be diluted with an equal amount of water and drunk at room temperature, as ice was not easy to come by.

By the 1950s the Old Fashioned had morphed into a specific formulation; an orange wedge and two maraschino cherries in a glass with a quarter ounce simple syrup and two ounces of rye whisky lightly muddled with a few ice cubes and a couple of dashes of bitters. While this formulation seemed to work for Don Draper, I find it to be too sweet for my liking, as it masks the flavor of the bourbon rather than accentuating it.

In today's modern cocktail renaissance the Old Fashioned serves as a template of creativity for professional mixologists and at-home cocktail nerds. The basic formula is bitters, sweetener and liquor (usually bourbon or rye) over ice then stirred to chill and diluted in the right amount. If using standard ice cubes it is stirred less to not dilute it as much, whereas if the bartender has access to large ice cubes it is stirred more.

All types of bitters are different and can give very different qualities to your drink, as well as different syrups, such as reduced apple cider or maple syrup. Standard ice from the ice maker in your fridge will work fine, but to take your cocktails to the next level consider purchasing some inexpensive specialty ice molds. Some make spheres and others make cubes large enough only one fits in a glass. You can also get creative with fruit. The specialty Luxardo cherries found in nice liquor shops are delicious (and expensive!). Try making your own cocktail cherries by macerating pitted fresh cherries in a jar overnight with a mixture of equal parts simple syrup and brandy or bourbon.

3 dashes Fee Brothers Black Walnut Bitters. Pecan bitters are good too, but much harder to find.

2 oz bourbon (I prefer Four Roses for this as well)

In a sauce pan combine two parts demerara sugar or brown sugar with one part water. Turn on heat and stir until the sugar is diluted. The syrup can be stored in the fridge for up to two weeks. In addition to use for classic cocktails, simple syrup is ideal for sweetening iced coffee, iced tea or other cold drinks.

In a saucepan combine one part honey with one part water. Turn on heat and stir until the honey is diluted. Try not to let this boil or even simmer, especially if you are using particularly good honey, as it will burn off the delicate flavors. This is also good for sweetening cold drinks as it dilutes easier.