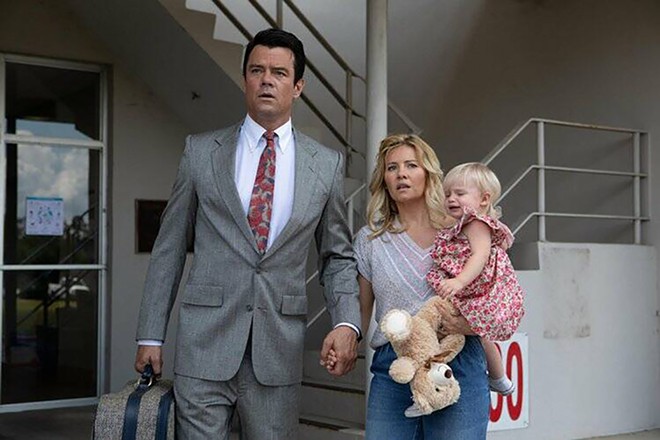 During the 1980s, Gilbert Galvan Jr. set a rather ignominious record, one that he was actually quite proud of, despite the fact that he ultimately did not profit from it in any way. Having pulled off 57 consecutive bank robberies in Canada before being apprehended, he managed to net $2.4 million ($6.6 million in today's dollars) and give his wife Andrea a life many of us can only dream of. How he was able to pull this off, and then lose everything, is the subject of Bandit, an unexpectedly entertaining biopic that proves as amusing as it intriguing.

Josh Duhamel — never more engaging — is Galvan, a smart man with little direction who finds himself on the short end of the stick in the era of Reaganomics. Looking for further opportunities, he heads north where he falls for Andrea (Elisha Cuthbert) and decides to turn his life around. However, community college courses are not for him, as he finds himself more adept at chicanery than hard work. With the help of elaborate rubber prosthetics and imaginative costuming, he embarks on his life of crime, ultimately backed by mobster Tommy (Mel Gibson). While the film runs over two hours, director Allan Ungar keeps things moving at a brisk pace, while Duhamel displays acting chops he's never shown before, giving Galvan enough emotional weight that we actually end up rooting for him to pull off that 58th job. Available through Video-On-Demand.

It's too bad director Olivia Wilde has repeatedly and publicly shot herself in the foot on the press tour for her film Don't Worry Darling. The rumors that have swirled about regarding her relationship with her lead, Harry Styles, how that alienated her star, Florence Pugh, and then a related mess with actor Shia LaBeouf have overshadowed the project. These concerns were exacerbated by Wilde's evasive and deceptive answers to questions regarding them during numerous press conferences and interviews, only fanning the flames of conjecture.

This is a shame, as Darling proves to be a very well-made movie, a smart, sexy, stylish social screed that, while a bit dated, manages to ask still-pertinent questions regarding gender roles and inequality. Florence Pugh is Alice Chambers, a 1950s homemaker living the American Dream who realizes it's actually a nightmare. What begins as a Douglas Sirk melodrama eventually morphs into a sci-fi mindbender that constantly surprises. The production design is gorgeous, as it should be in a world too perfect to be true, while the veteran cast proves game and convincing. Pugh is a particular standout, the sort of actor you run out of accolades for in praising her consistently strong work. The film stumbles a bit at the end, but the overall effect is hypnotic, and once it was over, had me thinking about much more than who slept with who or who might have been slighted during its making. In theaters.

American film studios and directors have a bad habit of not leaving well enough alone when they remake European movies. Changes occur that often undercut the effectiveness of the original version, the complaint often being that they have been "dumbed down" for audiences in the States.

The latest example of this unfortunate approach is Goodnight, Mommy, a re-do of the 2014 Austrian thriller of the same name. Naomi Watts is the titular character, an actress who's just had cosmetic surgery, her face completely bandaged as she recovers in a secluded house in the country. Her estranged husband drops off their twins, Elias and Lukas (Cameron and Nicholas Crovetti), to spend some time with her, an arrangement she's not all that pleased with.

As they observe mom, the boys become convinced that their mother is not under the bandages and that there's a stranger in their midst. The steps the siblings go to in order to prove their theory become increasingly desperate until... An argument could be made that this is not so much remake as much as a needless theft of a known title, the story veers so far afield from the original. Whereas the first version proved to be an increasingly relentless march toward a moment of extreme violence, as directed by Matt Sobel and written by Kyle Warren, their take devolves into a nonsensical exercise in narrative chicanery. While the intent is to deliver an ironic, poignant twist during the third act, the result is an embarrassing and insulting denouement that induces nothing but incredulous eye rolls. Streaming on Amazon Prime.