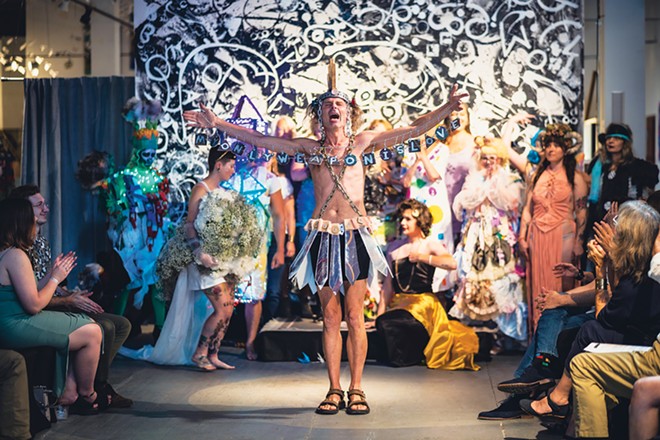 Photo by 1221 photography
“Romantic Soldier,” designed and modeled by Marco Mulder. The text he is holding reads: “My only weapon is love.”

Recycled fabric, cardboard and plastic found new life on the runway at this year's annual fashion show at The Pharmacy Gallery & Art Space. Some of the best creative talent Springfield has to offer was on display with dynamic style. "It has become a yearly tradition of the Pharmacy to have a fashion show," said Marco Mulder, an artist and Pharmacy member. "So many designers from last year came back with new designs this year."

The event, which took place Sept. 10, showcased wearable designs from over a dozen artists and makers. Both Pharmacy members and a selection of guest designers participated. "It was a great success," said Mulder, who modeled his own piece, titled "Romantic Soldier," an outfit incorporating a sign reading "My only weapon is love" and made of plywood, chains, nuts and bolts. Mulder calls the piece "hardwear" because all the elements come from the hardware store.

"Diane Schleyhahn, who helped organize the show, challenged the models to be more theatrical," said Mulder, "It is an amazing experience to walk out into the spotlight with Detroit techno music, a deep-voiced announcer bragging about you and the roar of enthusiastic audience members all around you."

Marco has been a painter for 30 years and is embracing fashion design after joining The Pharmacy three years ago. "Every creation is accepted, so long as it is about love and originality," said Mulder. "I have already started on a new costume for next year and it will be spectacular. This kind of activity is healing to the soul."

Many of this year's designs had a deeper message behind them. "All of my pieces focused on using recyclable materials as much as possible," said Blake Detherage, a designer and photographer. "I believe we live in a world of carefree gluttony, and that conditioning has ravaged our relationship with our planet, 'Spaceship Earth.'"

Detherage had three different creations on the runway this year – each with its own message. "This lack of empathy for our world is not only destroying the planet, but our connections with ourselves as well," said Detherage. "It's time to educate and trim the fat. We are capable of doing more with less."

Detherage's piece titled "Liberty" takes aim at oil company profits. "Burning promises while dealing dirty with oil to pad pockets leads to disgraceful defacement of our pursuit of happiness, life and liberty," said Detherage. "A menagerie of cardboard, packaged plastics, lighting effects and stuffing, this piece had the most accessories, with a bag o' cash, burning torch and flaming headpiece."

The fashion show coincided with the opening of The Pharmacy's new exhibit, titled "Black, White and More." It featured work from Pharmacy members and a collection of guest designers, including Chicago-based photographer Jim Spizzo. His dystopian piece "Strangers in a Strange Land" will be on display as part of an exhibition of B&W photography. "Black, White and More" will be on display through November at the gallery's downtown location.

Joseph Copley is production designer for Illinois Times and co-publisher of Activator, the music and arts magazine.