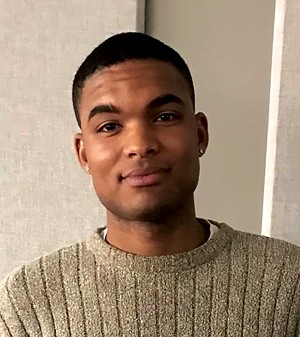 Courtesy of the Small Family
Gregory Small.
A Sangamon County man with mental illness who was shot four times as he ran toward a Chatham police officer with a knife was found not guilty by reason of insanity July 29.

Gregory Small Jr., 31 – who spent several weeks at HSHS St. John's Hospital after being shot by Officer Adam Hahn in the incident March 5, 2021, in the front yard of his family's home in Chatham – was returned to Chester Mental Health Center after a stipulated bench trial and verdict of not guilty by reason of insanity (NGRI) from Circuit Judge John "Mo" Madonia on an aggravated assault charge.

Small, who has schizophrenia, is scheduled to return to Sangamon County on Sept. 6 for a hearing to determine whether he is in need of further mental health treatment.

Treatment can be mandated by the court for up to 18 months – the amount of time he could have been ordered to serve in prison had he been found guilty of the Class 4 felony. If convicted, Small could have been sentenced to between one and three years in prison, with time served potentially reduced 50% for good behavior.

Small's case generated statewide attention as his sister, Sunshine Clemons, co-founder of Black Lives Matter Springfield, posted on social media and called on State's Attorney Dan Wright to drop the charge against her brother, a self-taught coder and Eagle Scout.

Clemons cited details of the incident and her brother's struggles with mental illness in calling for dismissal of the charge as part of the "Speak Out for Gregory" movement she started. She declined comment in a text message after the verdict.

Small's mother, Keena Small, also declined comment July 29 to Illinois Times as she walked out of the courtroom. "This isn't a good time," she told an IT reporter.

The hearing marked the culmination of a case that generated more than 61,000 signatures on a Change.org petition calling for the assault charge to be dropped and more than $12,000 in online donations to offset legal, medical and living expenses.

Wright and Gregory Small's attorney, Scott Sabin of the Springfield law firm of Cherry Frazier & Sabin, said in court that they agreed with the NGRI verdict.

"Under the circumstances, we are proceeding in the best manner that we can," Sabin told the newspaper.

Wright said in a written statement after the hearing: "While the court found that Mr. Small committed the offense of aggravated assault against a police officer, the parties agreed that he lacked the mental capacity at the time of the offense to be convicted. Our justice system requires the filing of a criminal charge to reach this point and ensure those who commit crimes while operating under a severe mental illness get the treatment they need, while preserving public safety."

Sabin said the NGRI verdict ensures "that my client and similarly situated defendants are not branded criminals for mental health issues that are largely not under their control."

When asked whether Small's family was satisfied with the result, Sabin said he couldn't speak for the entire family.

"Their first and major concern is for their son and brother," he said. "They want him treated fairly and appropriately."

Sabin said Madonia determined – based on Chatham and Illinois State Police reports, a psychological examination of Small and other evidence – that Small, at the time of the incident, "did not appreciate the criminality of his conduct, and under the law, he shouldn't be held responsible."

Sabin said: "Gregory is on the mend. ... This has been a long and difficult journey for Greg and his family. I hope this brings attention to mental health issues and the need for more resources for individuals who suffer from these mental conditions."

Officer Hahn was dispatched to the Small family home in March 2021 after Keena Small called 911 and asked for help from police because her son, Gregory Small, was cutting himself with a knife and threatening others.

A dashcam video released by the Chatham Police Department showed Hahn, who is white, repeatedly telling Small, who is Black, to "put the knife down" as Small ran toward Hahn.

Hahn then fired four shots at Small, who was transported by ambulance to St. John's Hospital. Police officers were able to recover the knife after repeated requests to Small, who continued to cut himself with it, according to police.

Wright told Sabin in a May 25, 2021, email released as part of an Illinois Freedom of Information Act request that he wanted to see the case resolved through Sangamon County's Mental Health Recovery Court program. Small had no previous criminal convictions.

"I believe court-mandated treatment is the only remaining option given Mr. Small's history of violence toward himself, his family, law enforcement and the general public since 2018," Wright wrote. "Mr. Small's history also clearly demonstrates that, despite the support of a committed family network, all other efforts to manage his mental illness and related propensity toward violence have been unsuccessful. This includes three prior involuntary commitments."

In another email to Sabin in May 2021, Wright wrote: "Given the circumstances of this incident, Mr. Small's history of violence, multiple civil commitments and continued instances of conduct which threaten the safety of himself, his family and the public, this process is the only remaining option to prevent further violence leading to grave injury or loss of life. Dismissal of the case under the totality of these circumstances would be a disservice to Mr. Small, his family and the people of Sangamon County."

Police reports indicate Small was arrested in 2018 by Springfield police for aggravated domestic battery after an alleged attack on his mother and sister that resulted in the hospitalization of his mother. He was never formally charged.

Another report, from the sheriff's office in Pinellas County, Florida, said Small punched an elderly man outside the man's home, then hugged the man before leaving on foot. Small wasn't charged in that incident.

And in May 2019, Springfield police said they responded to a call from Small's mother that Small had become aggressive toward his father, who used a wheelchair, during a local church Bible study meeting. The reporting police officer wrote that he had to take Small to the ground; Small was taken to St. John's for an involuntary admission but not arrested.

Clemons told Wright last year in an email that her brother "never assaulted anyone and should not have been met with deadly force" in the March 2021 incident.

"We should not fear law enforcement but here is just another example of why we do. ... I am appalled that life-threatening violence, four shots, were used by Officer Hahn," Clemons wrote. "In addition to this inappropriate response by an officer in a mental health crisis call by Gregory's own mother, charging Gregory is unacceptable and would only do more harm."

She added, "With the proper treatment from medical professionals, he has a bright future ahead of him, but any charges against him would follow him for the rest of his life, impacting his ability to get a job, rent a home and succeed."

Wright decided not to charge Hahn in the incident after an Illinois State Police investigation found no wrongdoing. The law doesn't require someone to touch another person to justify an assault charge.

Wright told Sabin in a June 2021 email he was concerned that "many have been misled by continued escalation of an incomplete and demonstrably false narrative."

In another June 2021 email, Wright told Sabin, "Our objective remains the same, a treatment-based resolution without a plea or conviction. I remain open to a potential amendment to misdemeanor aggravated assault and voluntary participation in Mental Health Recovery Court." Wright wrote that he also was open to a court finding of not guilty by reason of insanity to resolve the case.

Sabin told IT that he and Wright were working in mid- and late 2021 to resolve the case and were weighing the option of Small participating in Mental Health Recovery Court without having to plead guilty first.

Wright would have committed to drop the charge and assist in expunging records of the case after Small completed court-mandated treatment and other requirements, Sabin said.

Progress toward that resolution of the case stopped when Small – who was free on his own recognizance with conditions requiring mental health treatment compliance – experienced a decline in his mental health, Sabin said.

In the November case, Gregory Small was observed running in a Chatham roadway at about 1 p.m. Nov. 14 and was threatening to kill his brother and himself, according to a police report.

Small ran from officers and was found kneeling in front of Chatham Baptist Church. According to the report, Small made several statements to officers, including that if he killed his brother, someone would have to kill him, and "I'm God's bitch."

Once at the hospital, Small "continued to say that God gave him an opportunity to die and he messed it up," according to the report, which added that Small "asked the staff at St. John's to break his legs."

Madonia ruled Small unfit for trial on Dec. 28 and ordered him placed in the custody of the Illinois Department of Human Services for treatment to restore his mental fitness.

Based in part on DHS' recommendation, the judge found Small fit for trial on July 29.

Madonia said after the stipulated bench trial – in which no witnesses were called but both sides agreed on the evidence – that Wright provided sufficient evidence to prove each element of the aggravated assault charge beyond a reasonable doubt.

Madonia also said Sabin has provided "clear and convincing evidence" that his client was not guilty by reason of insanity.