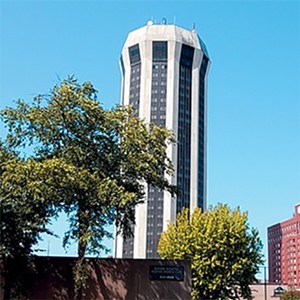 The Wyndham City Centre hotel would be renovated for $25 million into studio and one-bedroom apartments renting for $700 to $1,000 per month under a rezoning proposal headed to the Springfield City Council for final approval.

GoodHomes will take its proposal to the City Council on July 19 after the Springfield Planning and Zoning Commission voted 4-3 on a proposed "special provision" variation to central shopping district zoning.

Because the project failed to receive enough "yes" votes – with two zoning commissioners abstaining or voting present – the number of votes needed from council members to pass will be seven instead of the usual six votes, city spokeswoman Julia Frevert said.

GoodHomes spokesman and principal David Mitchell told the commission there's a need for more market-rate apartments downtown for the 54,000 workers employed within a one-mile radius of the Wyndham.

"Your downtown core is very attractive, but it has no real meaningful residential opportunities for this workforce to live in," Mitchell said.

"What we're really trying to do is to create an exciting place to live, and it could be the first step in a revitalization of the residential part of Springfield," he said.

However, the staff of the Springfield-Sangamon County Regional Planning Commission recommended denial of the project, in part because the current and proposed future owner of the property provided "no evidence to back the assertion that the project will add needed housing for Springfield and enhance property values."

The hotel's exterior look would remain the same, but the inside would be completely redone, and the top floor would be made into a public observation desk featuring panoramic views of central Illinois, Mitchell said.

The top floor also would include a food hall and an entryway with a permanent gallery for the Sangamon County Historical Society, he said.

"We think that will enhance tourism. We think it will enhance community interest," Mitchell said, adding that the company would use "predominantly prevailing-wage labor" for the project.

The project primarily would be paid for by GoodHomes, which has developed and financed more than $10 billion in development over the past 15 years, Mitchell said.

He said the company would look into potential government assistance programs to build market-rate housing, including tax-increment financing, but any such assistance wouldn't be essential for the project to move forward.

A recent proposal to renovate the Myers Brothers Building into below-market-rate apartments fell through when a developer's request for low-interest financing through the Illinois Housing Development Authority failed to receive support from City Hall.

Scott Larsen, president of Tower Capital Group, which supports the Wyndham renovation project, told commissioners the COVID-19 pandemic killed demand for hotel rooms from the corporate clients the hotel had catered to in the past.

The State Journal-Register reported that the brand change helped to avoid confusion with the President Abraham Lincoln Hotel across the street. That hotel became a DoubleTree by Hilton in 2013.

The Wyndham fell on hard times and was purchased by Tower in 2019 for $7.4 million after a foreclosure proceeding. The building had a fair-market value of $10.8 million at the time, but the value has dropped since then to $2.8 million, according to Sangamon County property records.

Larsen said Tower was 70% done with a design to renovate the hotel and convert it into a Delta by Marriott when COVID-19 hit in early 2020.

Annual average occupancy dropped from 42.6% before the pandemic to about 27% currently, he said. It will take at least four or five years, if ever, for corporate travel to make a full comeback in Springfield and nationwide, and the Wyndham property, like many "big box" hotels, will continue to suffer, Larsen said.

The hotel had 200 employees before the pandemic and fewer than 85 now, he said, and downtown convention business isn't enough to make the hotel's business model sustainable long-term.

For years, the hotel has rented about 25 units in the hotel as apartments. Those units would be rehabbed along with the rest of the approximately 400 units, Mitchell said.

GoodHomes would keep 40,000 square feet of convention and meeting space in the building and convert 80 of the units into extended-stay hotel rooms, all to support convention business downtown, Mitchell said.

The remaining 320 units would be apartments ranging from 320 to 800 square feet, and the renovated complex would include a swimming pool, fitness center, game room, tenant lounge and tenant storage, he said.

Some commissioners were skeptical of GoodHomes' expectation that many future tenants would move in so they could walk to work. GoodHomes officials said that more pedestrians downtown would boost sales for downtown retailers and restaurants.

Some commissioners said Springfield residents, like many Midwesterners, prefer not to walk or ride a bicycle even a few blocks to work and would rather drive. Mitchell said a connected 535-space parking lot that GoodHomes controls would provide more than enough spaces for tenants' cars.

Mayor Jim Langfelder said he and Scott Dahl, director of the Springfield Convention and Visitors Bureau, along with other downtown leaders, are negotiating with Tower on the number of hotel rooms needed in the Wyndham building to provide adequate service as convention business rebounds.

The current zoning allows for up to 200 apartments in the building, but Mitchell said the project wouldn't be worth it financially with that few apartments, because rents would have to be raised and would be unaffordable for many people.

Langfelder said he and downtown leaders are trying to work out an "amicable solution" on the number of hotel rooms and apartments needed to support conventions and give a boost to downtown businesses serving downtown residents.

Dahl said hotel occupancy rates citywide dropped to 31% during the pandemic. Current occupancy is about 49% and likely will increase during the busy summer tourism season, he said. The pre-pandemic occupancy rate was 55%.