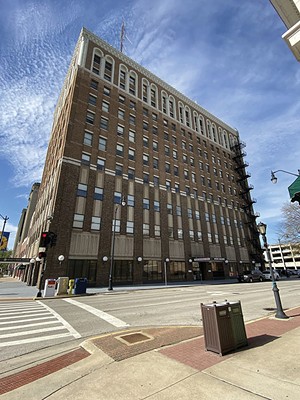 A Kansas-based housing developer has given up on its plan to renovate the Myers Brothers Building in downtown Springfield for affordable rental housing.

He said he decided not to proceed on his option to buy the 10-story, 106,000-square-foot building on the west side of the Old State Capitol Square because he couldn't secure the necessary financing.

Prime Co. originally planned to convert the building – currently used for office space and less than half full – into 114 rental apartments with rents at below-market rates.

As part of a potential $31 million deal that would include purchase and renovation of the building, the apartments would have been geared toward tenants with an annual household income of $36,000 or less.

But because Elsey needed financing through the Illinois Housing Development Authority, which offers low-interest loans and grants, he required support from city government officials for a successful application.

Mayor Jim Langfelder said he would like to see 20% of the proposed units being rented at below-market rates and 80% reserved for market rent.

Langfelder and Elsey didn't see eye-to-eye on the need for below-market-rate apartments downtown, and Elsey said the reduced financing available from IHDA for Langfelder's scenario would leave Elsey $8 million short in financing for the project.

"The mayor says he wants a diversity of income downtown," Elsey said. "I can't agree with that. ... You need to get warm bodies downtown. You need to have people living there."

Langfelder defended his stance, saying, "We're ripe for development, but we want to make the right decisions when it comes to the mix ... for a thriving downtown."

The mayor said it's unlikely IHDA would set aside any more financing for Springfield projects this year anyway.

The quasi-governmental agency recently approved low-interest financing for the renovation of 168 units at Pine Woods Apartments on the west side; 40 new single-family, mixed-income rental homes for Nehemiah Homes on the east side; and a 24-unit, permanent supportive living complex for Helping Hands of Springfield clients at 3526 S. Park Ave.

Richard "Dick" Myers, chairman of the executive committee for Myers Family Real Estate of Springfield LLC, said he was disappointed that the deal with Prime Co. fell through.

"I think it was a good project for the city and for the downtown," said Myers, a former Springfield resident who lives in California. "This was a very good developer."