Should the government subsidize nostalgia? 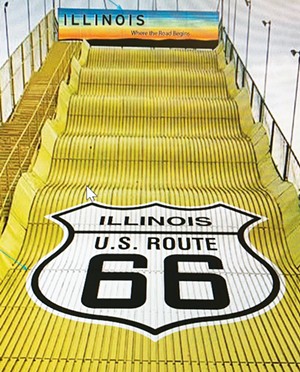 RENDING BY ACE SIGN CO.
The city of Springfield wants to add a Route 66 emblem to the Giant Slide to promote Springfield as a destination.

I've been thinking about that a lot this past week. The Illinois State Fair was in danger of losing my favorite attraction. No, not the butter cow or Turasky's thin-cut ribeye sandwiches or the annual steer show.

We are talking about serious high-brow entertainment: the Giant Slide.

Just about any ride in Happy Hollow is vomit-inducing for me. But I love that old slide. I've ridden down it with each of my three daughters as soon as they were old enough and brave enough to take the plunge.

The 40-foot-tall slide is for sale again, and several prospective buyers want to take the thing apart and move it out of state.

But Doug Knight, owner of Knight's Action Park, wants to keep it intact and on the fairgrounds.

The Springfield City Council voted Tuesday to support his purchase with a paid sponsorship of the slide, at $30,000 a year for the next four years. For those who aren't mathematically inclined, that's $120,000 in taxpayer dollars.

The idea is that the attraction could be embossed with advertising and that would help promote Springfield as a destination. The slide, which was built in 1968, could be decorated with a Route 66 logo and become part of the upcoming Mother Road 100th anniversary observances.

Sorry, I'm not buying it. Advertising isn't the goal of this project. The goal is to keep a beloved icon on the state fairgrounds and the advertising is a means to an end. While the city may get some benefit from the ad, I could point to a half dozen more cost-effective mediums.

Also, the slide isn't in Springfield. Yes, the fair is a wonderful local institution, but the Illinois State Fairgrounds has never been annexed into the city. So, despite the subsidy, the fair attraction will not contribute to city taxes.

Cities often subsidize private enterprises in the name of entertainment or just as a community amenity. Just think of the number of professional sports stadiums erected by tax dollars. This type of subsidy is not without precedent.

But where do you draw the line? Give money to the Giant Slide and then you are on that slippery slope of subsidizing just about anything.

But sometimes we fund things because they have historic significance.

Well, the most newsworthy thing to happen on the slide was in August of 1978 when then-Gov. James R. Thompson took his newborn daughter down the slide while holding her in his arms.

I was in junior high at the time, and my mother was so outraged she mentioned it just about any time the governor's name came up. "How could he endanger his own child that way?" she would say with a tone of bewilderment bordering on disgust.

Fast-forward 21 years and I'm a statehouse reporter interviewing the now-former governor about his lobbying activities. During the phone interview he was in Las Vegas with his daughter, Samantha, celebrating her 21st birthday.

The state fair was going on at the time of our conversation. I did the math in my head and it dawned on me that Mom wasn't exaggerating. Samantha was fresh out of the womb when Big Jim took her plunging down 130-feet of fiberglass.

So, I asked Thompson if he remembered the controversy.

He laughed and said he still had mothers stop him on the sidewalk in Chicago and tell him he shouldn't have taken his daughter on that slide.

After that interview, I didn't give the Giant Slide much thought until I had children of my own.

I first went down the slide with my oldest, Gracie, when she was 3 or 4. We were on the same burlap sack together at the top ready to make the plunge. She was afraid, but reassured by my presence.

We enjoyed our ride downward and have made it an annual family tradition.

Today my girls are 11, 14 and 16. It's no longer cool to be seen riding the slide with your dad, even if he is a few lanes over. I find myself begging my own kids to go to the slide. I get eyerolls in response. But usually on the final day of the fair we take the plunge.

While I may think city tax dollars could be better spent, I can guarantee you when I ride down the Giant Slide this year with my three girls, I'll be glad it's still here.