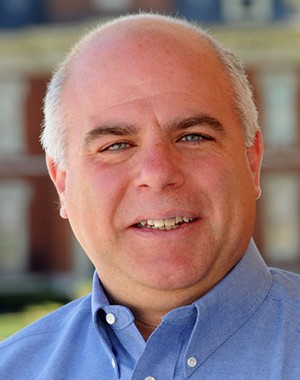 PHOTO by david blanchette
Former state senator and gubernatorial candidate Sam McCann.
considering pleading guilty as part of an agreement with federal prosecutors to resolve charges that he illegally spent more than $200,000 in campaign funds.

McCann, 52, a former Republican senator from the Macoupin County community of Plainview, represented the 50th Senate District, which includes parts of Springfield and Sangamon County.

"A potential resolution has been reached between the parties," Brown's motion said.

"Additional time is required within which to receive a draft plea agreement from the government, to review it with the defendant and permit him time to consider the offers made, and for the entry of a guilty plea or to prepare for jury trial, if necessary," the motion said on McCann's behalf.

McCann didn't reply to a text message and email seeking comment. Brown didn't respond to a request for comment, and a spokeswoman for the Springfield-based U.S. attorney's office for the Central District of Illinois declined comment.

McCann said at a U.S. District Court hearing in February 2021 that he was living in Plainview with his then-13-year-old daughter and 18-year-old son, and was being supported by his wife's earnings as a nurse in the Washington, D.C., area.

The next court hearing in the case – a video conference with Long in Urbana – is scheduled for June 13. A potential jury trial in front of U.S. District Judge Sue Myerscough scheduled for May 3 was delayed until at least July 5

McCann was indicted by a federal grand jury Feb. 3, 2021, on charges of fraud, money laundering and tax evasion related to his "alleged misuse of campaign money for personal expenses," according to a news release from the U.S. attorney's office.

McCann wasn't arrested. He has pleaded not guilty and remains free while the case is pending.

The $200,000-plus in misspent campaign contributions allegedly came from McCann's Illinois Senate campaign funds and from money donated to his unsuccessful bid as a Conservative Party candidate for governor in 2018.

The charges also say McCann used campaign funds for loan payments on the truck, for fuel and insurance for both vehicles, for two separate personal mortgage loans, a personal loan, about $187,000 in direct payments to himself, $52,300 in payments for payroll taxes, credit card payments for a family vacation in Colorado and other personal expenses.