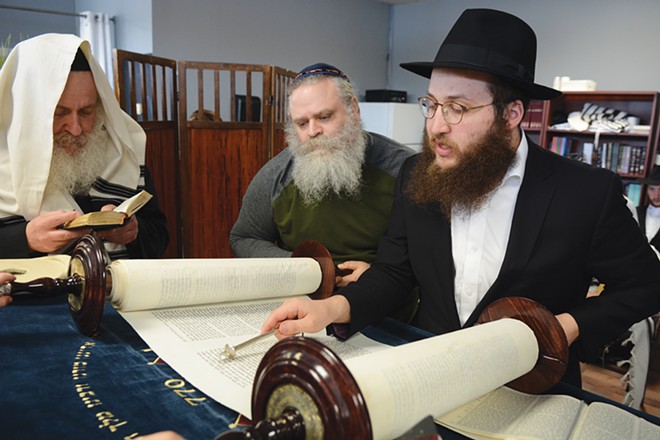 Photo by David Blanchette
Avrohom Turen reads from the Torah as Chuck Faingold and Eli Turen look on.

With his distinctive beard, long black coat and hat, Mendy Turen has been mistaken for a Lincoln impersonator and even an Amish farmer.

But he is a Hasidic rabbi serving Springfield as part of the Chabad movement, a subsect of Judaism that stresses traditional worship, adhering to strict dietary and cultural rules and experiencing the joy of God.

His outreach to fellow Jews, particularly those unaffiliated with a synagogue, is personal. He invites them to his home for dinner, delivers unleavened bread during Passover and takes a personal interest in their lives.

For David Goldman, his first experience with Chabad was while he was walking through White Oaks Mall with his wife, and Rabbi Turen approached him and asked him if he would like to pray the tefillin.

The tefillin are a set of small black leather boxes with leather straps containing scrolls of parchment inscribed with verses from the Torah. One box is placed on the upper arm and the strap wrapped around the forelimb, hand and middle finger, and the other box is placed near the top of the forehead.

Goldman, a physician and attorney who teaches ethics to medical students, said this was his first experience praying with the ancient device.

"We became friends, and I became affiliated with the Chabad. I sit on the advisory board and I'm still active in my synagogue, Temple B'rith Sholom," he said.

The word "Chabad" is a Hebrew acronym for wisdom, understanding and knowledge. It's a movement that is dedicated to studying the Torah, living by the scriptures and reaching out and helping every Jew, Turen said.

Springfield's Chabad Center, 2467 S. MacArthur Blvd., is operated by Turen and his wife, Sara, and has been in Springfield for about six years. The first five years the center operated out of their home and in June 2021 it moved to its current location.

The couple, who co-direct the center, often explain tenets of their faith using simple illustrations.

"The matzo unleavened bread is the opposite of ego. Bread represents rising – ourselves rising, feeling great and big and full of ourselves. Matzo is flat, it's modest – the exact opposite of having a big ego. Not to get political, but look at Russia. If it weren't for someone's ego, the situation might be a little different over there," Turen said.

He and his wife teach children in the congregation this lesson in a unique way – by baking bread. On a recent Sunday morning, they turned the sanctuary into a kitchen and mixed flour and water together. The youngsters had 18 minutes from the time the water and flour touched to remove it fully baked from the oven.

Well, to be kosher, matzo must be free of yeast. Tradition has it that if the dough is fully baked within 18 minutes of the flour and water mixing, yeast has not invaded the ingredients. 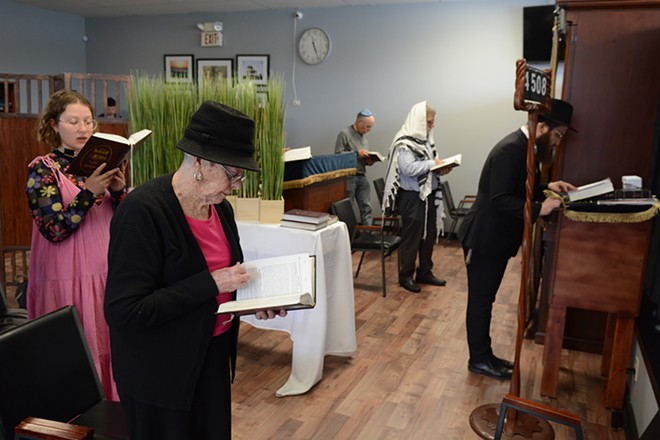 Precise obeyance of such rules is an important part of the Turens' life. This is a quite different lifestyle than lived by almost all other Jewish people in Springfield.

For example, Hasidic Jews believe most work is forbidden on the Sabbath. Religious texts and tradition dictate what is work. Operating something electrical or mechanical is among the things not allowed on the day of rest.

"I've made mistakes before. I stepped out of the bathroom and switched the light switch off without thinking. I shouldn't have done that, because that is work," Turen said.

Tearing paper is also considered work. So, before each Sabbath, Turen tears sheets of bathroom tissue and sets them beside the commode to ensure that work does not occur on the day of rest.

Carrying coins in one's pocket is considered engaging in commerce and is forbidden on Saturdays. Driving is also not allowed, so Turen walks from his home to Chabad Center to conduct Sabbath services. To avoid carrying the key to the center in his pocket, Turen attaches it to a clip hanging from his clothes. This enables him to unlock the building without violating the prescribed rules.

"The only time I have ever ridden in a car on the Sabbath is when my wife went into labor. It is permissible to work to save a life. It was determined that my wife needed me and would benefit from my presence," he explained.

"It's fabulous for me because of the meals on Friday night and all the holidays that they provide," she said.

Observing a kosher diet in a community such as Springfield is difficult because there are not any butcher shops that kill animals in the manner prescribed in Hebrew scripture.

"When we moved to Springfield 30 years ago, we dealt with this by becoming vegetarian," Melamed said. 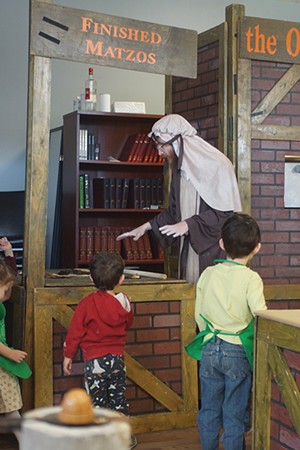 The Turens buy meat from kosher butcher shops in Chicago and St. Louis and use it in the meals they prepare.

"I have eaten outside of my home only once since moving to Springfield," Turen said. "That one time was at the Governor's Mansion, and I knew they had brought in kosher food from Chicago."

Melamed said she is impressed by the hospitality the Turens show to Jewish students attending University of Illinois at Springfield.

"One of the biggest things they do here, that the synagogues never did, is reach out to the universities. They have done an amazing job of recruiting students. They have them over for Friday night dinners," she said.

Melamed said Turen, who is 30, and his wife, 26, provide positive role models for other young people.

Traditionally, Hasidic Jews don't date in the same way as most others in society.

Sometimes a formal matchmaker is used, but in the case of the Turens, a mutual friend set them up. Adult ultra-Orthodox Jews are not allowed to touch a person of the opposite sex who they are not related to. Even handshakes are forbidden.

When a male visitor recently stopped by the Chabad Center, Sara Turen smiled pleasantly and spoke freely, but didn't extend her hand in greeting.

Also, among the ultra-Orthodox, married women are only allowed to show their hair to their husbands. Some women adhere to this requirement by wearing a kerchief, while others wear wigs. Sara Turen wears a wig that she has professionally styled in Chicago.

"Orthodox women know what they want and what the styles are. And we get good quality wigs that last. It's not like they're synthetic or anything like that. They are made of human hair ... A wig like this one costs $2,000," she said of her own wig.

One aspect of Jewish life that the Turens have brought to Springfield is the mikvah, a ritual bathing facility. It opened a year ago and around 20 Springfield-area residents have used it, Turen said. The bathing facility cost about $180,000 to construct. About one-third of the money to build it was raised locally, he said.

The mikvah is attached to their home. While mikvahs can also be used in ceremonies marking conversions to Judaism, Turen said he does not allow his to be used for that purpose in part because of differences in opinion among Jewish groups as to what constitutes a true conversion.

"It comes right out of the Torah that there should be a separation when the woman has her period, and she needs to separate from her husband. And then after the time of separation you count seven clean days, which means there's no blood. And then the woman would go to mikvah before being with her husband again. This is something powerful, and we're very careful about it. If there is no mikvah, then a husband and wife couldn't be together. Marriage is holy. The goal obviously is to be together," Sarah Turen said. 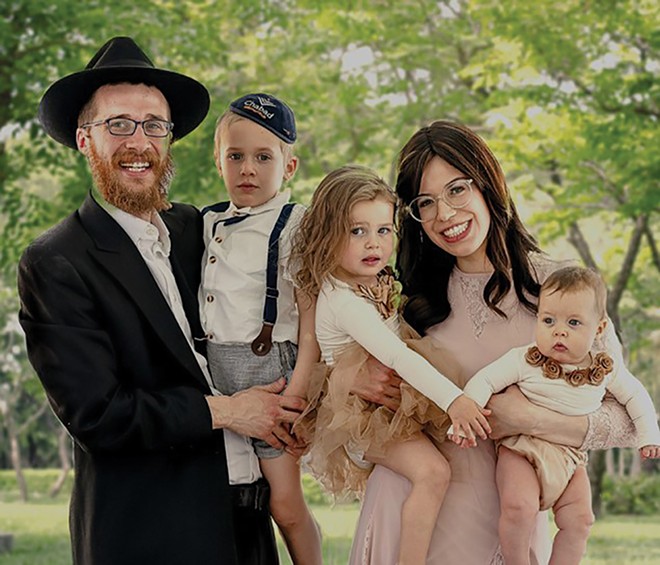 Rabbi Barry Marks led Temple Israel in Springfield from 1973 to 2017. He said he appreciates the work of the Chabad Center and has participated in some of their services. But he said the customs they employ are not common among Springfield Jews.

"His version of Judaism is not my version. ... If you go to St. Louis, you're going to find modern Orthodox Jews who are ritualistically observant, but who dress like everybody else – other than that the men wear skullcaps. ... Here, Rabbi Turen's level of observance is an anomaly, but would not be so in Chicago or St. Louis."

Communities such as Springfield rarely attract Hasidic Jews. If a Hasidic Jew were to be offered a job in Springfield, they might be reticent to make the move here because worship is a communal event, and if there are not others of your faith tradition already living in the community it may be less attractive, Marks said. Also, Springfield lacks the spiritual infrastructure such as kosher butcher shops and private Jewish schools, he said.

"Chabad is a very small segment of Judaism," added Mark Rabin, president of Temple B'rith Sholom in Springfield. "It appeals to what I believe to be a very narrow segment, as opposed to Temple B'rith Sholom and Temple Israel, which are mainline and modern. The concern I've got about the existence of Chabad is not necessarily the number of people that they will attract, but the financial side of the equation."

Some members of Springfield's synagogues also support Chabad, which he said he worries may divert money from the missions of the existing houses of worship.

Turen said he can appreciate the concern but believes that when people give to his organization, they are choosing to be more generous, not merely redirecting resources from other Jewish organizations.

Chabad is unique in that it sets up centers in communities all over the world. It is one of the largest Jewish religious organizations in the world. Unlike most ultra-Orthodox groups, which are self-segregating, Chabad operates mainly in the wider world and caters to secularized Jews. Much of their work targets Jewish people who have fully assimilated into secular society and are no longer religious.

In a 2020 study, the Pew Research Center found that 16% of American Jews attend Chabad services regularly or semi-regularly.

Joel Abramowitz, a Springfield social worker, is the son of a rabbi but said Chabad has invigorated his faith.

"They're Hasidic, the most traditional sect of Judaism. I enjoy going there. It's an opportunity for me to learn more about my religion, and I like singing and there's a term called 'davening' where you pray."

He said davening often involves a ritual swaying or rocking during prayer. His experience with the Chabad has made him rethink his Jewish identity. 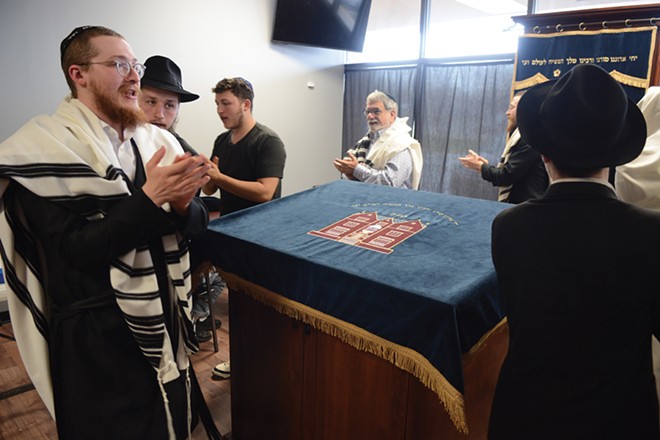 Photo by David Blanchette
During a Passover service, congregants dance in celebration.

"I identify with being a Jew. I've decided I'm no longer going to say I'm a reformed Jew or a conservative Jew or an Orthodox Jew. ... So many Jews have assimilated, and (Rabbi Turen) does a good job of reaching out to them. You'd be amazed at how many Jews there are in Springfield," he said.

So why does the Chabad operate centers in communities across the world?

Dov Weiss, an associate professor of Jewish Studies at the University of Illinois Urbana-Champaign, said Chabad is not particularly interested in converting gentiles to Judaism but they do want to make other Jews more observant.

"They're very tolerant people, and in general, they accept people no matter how observant or how little observant they are. They're very interested in what's called outreach. They're interested in just opening up their homes to entice people even if they're not observant. And so, it's a very welcoming culture, and it's become a very, very popular movement within Judaism.