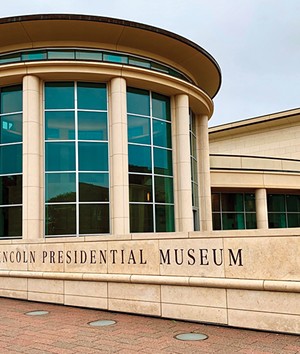 A year after being evicted from state-owned office space inside the ALPLM, the Abraham Lincoln Presidential Library Foundation has a new name and a new mission.
One year after an acrimonious divorce from the Abraham Lincoln Presidential Library and Museum, a private foundation that raised funds and supplied the state-owned institution with exhibits has established a partnership with the National Park Service.

"The Lincoln Presidential Foundation, formerly known as the Abraham Lincoln Presidential Library Foundation, is taking on a new role – leading and supporting efforts across the nation and perhaps the world to share the story of Abraham Lincoln's life, legacy and leadership," the foundation announced in a March 7 press release. "As part of the relaunch, the foundation has changed its name and adopted a new brand, which will allow it to achieve its new, broader mission."

Tim Good, superintendent of the Lincoln Home National Historic Site, said that the National Park Service has entered into a five-year arrangement with the foundation aimed at raising funds for programs and perhaps capital improvements. Initially, he said, the foundation plans to seek grants to benefit the historic site.

Through a Chicago public relations firm, the foundation offered to make director Erin Carlson Mast available for interviews, but declined an interview request from Illinois Times. Sergio "Satch" Pecori, foundation board chairman and chief executive officer of Hanson Professional Services, did not return a phone call.

"The future of the foundation simply could not be brighter," Pecori says in the press release.

The name change and plans to help the National Park Service come nearly a year after the ALPLM cut ties with the foundation, saying that the group had refused to share financial information, including how much money it had raised and how that money was spent. In a written statement, the foundation then said it was "shocked" at being evicted from state-owned office space and that the ALPLM had engaged in "heavy-handed and punitive tactics."

In the recent press release, the foundation says that it has raised more than $42 million for the presidential library and museum and to purchase a collection of Lincoln artifacts "which is on loan to the ALPLM through October, 2022." It isn't clear what might happen to the artifacts, known as the Taper Collection, after that. In addition to a stovepipe hat with questionable provenance, the collection, purchased for $23 million in 2007, includes gloves that Lincoln wore to Ford's Theatre and a cipher book that the Great Emancipator used to learn math as a child. It has long been considered an anchor of the ALPLM's artifact collection.

Chris Wills, ALPLM spokesman, says that there have been no talks between the institution and the foundation about the Taper Collection's future since the state and the group parted ways a year ago. In a written statement, Wills said that the collection should remain at the ALPLM. Under an agreement with the state reached when the foundation borrowed money to buy the collection from a foundation board member, artifacts were supposed to be transferred to state ownership annually as debt was retired. The agreement never was enforced, and the state board that oversaw the ALPLM eliminated the unenforced requirement in 2012. The foundation once dubbed a fundraising effort to retire the debt The Permanent Home Campaign, Wills noted.

"We have no indication the foundation would contemplate breaking faith with the thousands of generous citizens who gave money to keep the collection at the Abraham Lincoln Presidential Library and Museum," Wills wrote. "How would any organization ever be able to raise money again if it misled past donors so badly?"

Some money came from museum visitors who gained free admission to the ALPLM by joining the foundation, which once solicited people as they entered the building. In an interview, Wills said the institution doesn't know how much was raised via memberships sold at the ALPLM. "We could never get an accounting of that from the foundation," Wills said. "We requested written reports on how much membership money they raised, and they declined to provide it."

The ALPLM has replaced the foundation's membership program with its own, offering free admission for one year as well as perks that include discounts at the museum store.

"The Abraham Lincoln Presidential Library and Museum wishes the foundation well on its new mission," Wills said in his written statement. "The end of the formal relationship between our organizations has certainly been healthy for the ALPLM, and we hope the same is true for the foundation."

Bruce Rushton is a freelance writer. Reach him at brucerushton@hotmail.com.