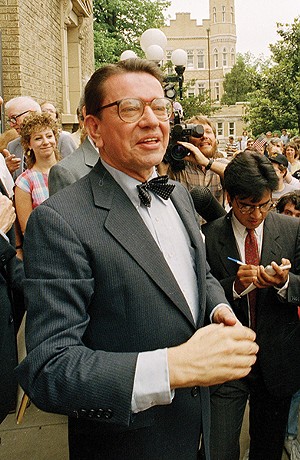 PHOTO BY MICHAEL FRYER/CHICAGO TRIBUNE
While he never held a college degree, the late U.S. Sen. Paul Simon of Illinois had a long and honorable career in politics and higher education, including founding what is now the Paul Simon Public Policy Institute at Southern Illinois University.
We live in a society that extols the virtues of degrees and diplomas – but not lifelong learning.

In Springfield, we honor Abraham Lincoln, our state's native son, who, despite having little formal schooling, was able to teach himself and become our greatest president.

But today when it comes to politicians, Americans have a different standard. We haven't had a president without a college diploma since Harry Truman.

In 2020, the New York Times reported 95% of today's House members and 100% of the Senate's have a bachelor's degree or higher. But only about one-third of Americans are college graduates.

According to the Congressional Research Service, more than one-third of the House and more than half the Senate have law degrees. Roughly a fifth of senators and representatives have their master's degree. Four senators and 21 House members have medical degrees and an identical number in each body (four, 21) have some kind of doctoral degree.

Does that mean we have a really good Congress?

Well, I have seen little evidence over the past decade to support such a proposition. Whether led by Republicans or Democrats, our nation's legislative bodies have few independent thinkers. Group think and deadlock seem to prevail.

Things aren't much different in Illinois. We haven't had a governor without a bachelor's degree since 1932 when Louis Lincoln Emmerson left office.

Steve Jobs, Bill Gates and Larry Ellison rose to be titans of high tech without obtaining a college degree. Movie director Steven Spielberg didn't receive his college degree until 35 years after he started at California State University in Long Beach. He was famous and successful by the time he was handed his sheepskin.

Unfortunately, a college diploma has become a litmus test for some voters on whether they will support a candidate.

This year, two of the four Republicans seeking their party's nomination for governor haven't earned a bachelor's degree.

If either state Sen. Darren Bailey, of Xenia, or Gary Rabine, of Bull Valley, were to win the governorship, it would be the first time in 88 years that someone without at least a bachelor's degree held that office. Rabine has only a high school diploma and Bailey has an associate's degree in agriculture production from Lake Land College.

Their opponents in the primary not only have degrees, but ones dripping with prestige. Former state Sen. Paul Schimpf of Waterloo graduated from Annapolis and later snagged a law degree from Southern Illinois University. And Jesse Sullivan of Petersburg has master's degrees from Oxford and Stanford.

There are things I like about Bailey and Rabine and plenty I don't. But one thing I wouldn't lose a moment's sleep over is their lack of academic credentials. I'm much more concerned about a person's willingness to learn and their life experiences.

Look no further than the late U.S. Sen. Paul Simon of Illinois. He never held a college degree but had a long and honorable career in politics and higher education.

Even without a college degree, Simon was able to found the graduate program where I received my master's degree. He later went on to found what is now the Paul Simon Public Policy Institute at Southern Illinois University.

While Simon didn't have a diploma nailed to his wall, he was well-educated. He read Greek philosophers in his free time. As a young man, he went into business for himself and eventually owned a chain of 14 newspapers.

That's an education in its own right. He was someone who not only read books but wrote them.

Before Joe Biden, we had five consecutive presidents with degrees from Ivy League universities. And we still managed to get enmeshed in stupid wars, make staggeringly dumb economic decisions and witness personal moral lapses in the White House that had the rest of us shaking our heads.

Do I care if a politician has a college diploma? Nope. But should they be educated? You betcha.