I don't think it's an exaggeration to say that Spider-Man: No Way Home is the most anticipated film of the COVID era, or that there's a lot riding on it. Two of the last three Marvel entries underperformed, while high expectations rests upon it, as an oft-viewed trailer confirmed that villains from the previous Spider-Man franchises will be included. Fans are waiting with bated breath to see if previous Spider-Men Tobey Maguire and Andrew Garfield will also appear as well

I'm happy to say that No Way Home surpasses expectations, delivering spectacle and emotional resonance as our hero (Tom Holland) makes great sacrifices while combating Dr. Octopus (Alfred Molina), Green Goblin (Willem Dafoe), Sandman (Thomas Hayden Church), the Lizard (Rhys Ifans) and Electro (Jamie Foxx). Stan Lee's classic moral, "With great power comes great responsibility," has always been at the core of the Spider-Man mythos and is the foundation here. What makes No Way Home one of the great superhero films is its powerful reminder that true heroism is within the grasp of us all, but that it comes at a price. Of course, that's the only thing that makes such deeds worthwhile, making those that commit such acts heroic indeed. In theaters. 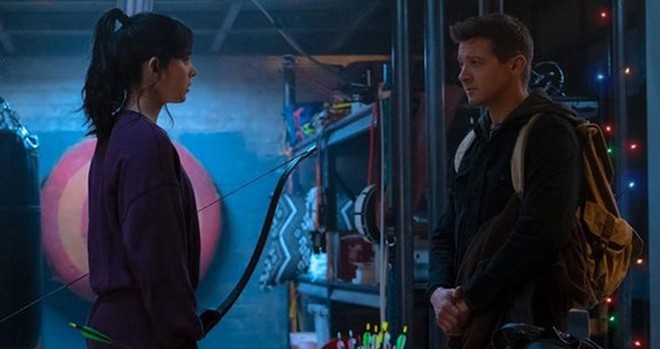 Disney+'s latest Marvel television series, Hawkeye, is perhaps the most fun of the small-tube spin-offs which serve to fill in the gaps between the studio's big-screen juggernauts. Jeremy Renner reprises the title role as the eagle-eyed archer who's a bit battered, physically and emotionally, after dealing with Thanos in the last Avengers film. All he wants is to spend Christmas with his family, but their stop-over in New York City is interrupted when our hero finds that impulsive archer Kate Bishop (Hailee Stanfield) has been mistaken for him, bringing old foes out of the woodwork. Feeling somewhat responsible, he sets out to save her bacon.

The antagonistic chemistry between the two leads is surprising and serves as the foundation for a show that, when you get down to it, doesn't have much of a plot. However, there's enthusiasm from all concerned, a car chase for the ages that I've gone back and watched three times, a really cool, pizza-eating dog and Florence Pugh reprising her role of assassin Yelena Belova from Black Widow. In the end, it's enough. Streaming on Disney+. 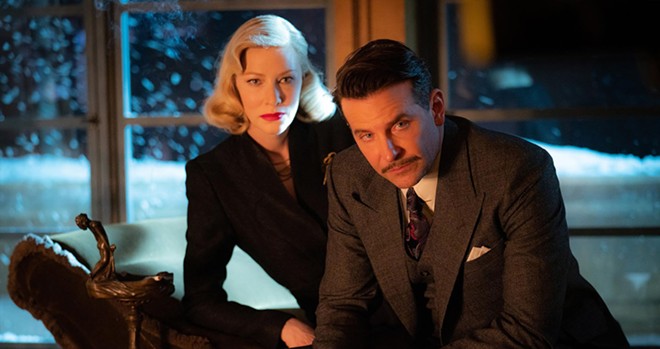 Guillermo del Toro, one of the filmmakers I most admire, has few peers when it comes to visual composition and engaging storytelling. Perhaps I have set the bar too high where he's concerned as his latest, Nightmare Alley, has been getting mostly positive reviews and been appearing on many "Best of" lists. To be sure, this adaptation of the novel by William Lindsay Greham's novel is a stunning visual feast, yet this tale of Stanton Carlisle (Bradley Cooper), a two-bit con artist who flies too close to the sun with his mesmerist act is a long haul, a film that drags its feet towards a predictable ending.

Del Toro's cast, which includes Willem Dafoe, Rooney Mara, Toni Collette, Ron Perlman and David Strathairn as various members of the titular carnival, delivers the kind of solid performances you'd expect from this group of veterans. However, their fine work isn't enough to keep us fully engaged until our anti-hero goes to the big city and runs afoul of femme fatale Lilith Ritter (Cate Blanchett). There's a good movie somewhere in this bloated effort that fails to rise to the level of excellence we've come to expect from all involved.