Can a Republican beat JB Pritzker?

For a quarter century, that was the contention of the Republican governors who led the state from 1977 to 2003. Governors Jim Edgar, James R. Thompson and George Ryan governed from the middle, sought consensus and coated whatever they did with a heavy layer of pragmatism.

Edgar and Thompson supported abortion rights. Ryan became a crusader against the death penalty and advocated for gun control.

"When I ran for governor, I never claimed to be anything other than a moderate. I might have muttered when I said it, but I have always considered myself a moderate," Edgar told Illinois Times in a recent interview.

But the Illinois Republican Party has changed a great deal since his time in office, raising the question: Are the days of moderate GOP leadership nothing more than a distant memory?

"A moderate (Republican) still has a chance of winning the governorship in Illinois," Edgar said. "I think it's still the case. The trouble is we have got to get a moderate through a primary, and that's a problem now. It didn't used to be a problem here. Back then the party was more pragmatic, but that changed. ... The Trump phenomenon affected that to a great extent. I mean, you've got some Republicans out there in elected office who sounded moderate 10 years ago. But today they don't sound moderate. They're scared to death of Trump and of his people."

"When Edgar, Thompson and Ryan were governors, Chicago was a Democratic stronghold, the suburbs were dependably Republican and the remainder of the state, more often than not, was where close gubernatorial races were decided," said Robin Johnson, a Democratic consultant and a political science lecturer at Monmouth College.

Today, Chicago remains Democratic and downstate is increasingly Republican. And elections are decided in the suburbs, which are more politically independent, Edgar said.

The reasons for these demographic changes?

"The suburbs became more racially, ethnically and politically diverse as more people moved there from the city and, like much of rural America, downstate has become increasingly susceptible to far-right populism," Monmouth College's Johnson said.

"They are angry. Who can blame them? Those communities have lost well-paying manufacturing jobs, their towns are suffering and so are they. The future looks bleak, and the Democratic Party has largely given up on these areas," Johnson said. 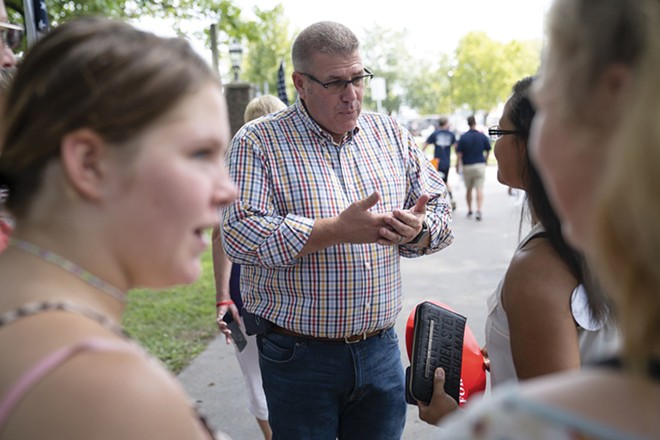 Hoping to tap into that vein of discontent are hard-core conservatives like state Sen. Darren Bailey, R-Xenia, and Bull Valley businessman Gary Rabine. The more moderate candidates facing them in the GOP gubernatorial primary are venture capitalist Jesse Sullivan of Petersburg and former state Sen. Paul Schimpf of Waterloo.

"Illinois is ground zero in the fight against a Marxist movement right now," Rabine said of legislative Democrats and Gov. JB Pritzker, a billionaire scion of the Hyatt hotel fortune.

The rhetoric isn't any less extreme from Bailey, who has sponsored legislation to make Chicago a separate state. He's also proposed legislation that would allow public sector pensions to be reduced or changed, which he claims will help address the state's massivily underfunded pension liability.

"Last March, as a newly elected state senator – one month after I announced my run for governor – I drafted a constitutional amendment to remove the pension protection clause from the constitution," he said. "People said that was political suicide."

Jim Nowlan, a moderate Republican and retired University of Illinois political science professor, said he believes Bailey will be the GOP nominee.

"I see his signs everywhere, and he seems to have tied up key constituencies with the Republican Party – homeschoolers, religious conservatives and others. I don't think he can win a general election – but I do think he will be the party's nominee."

For his part, Bailey holds moderates within his party in a bit of contempt.

"I think Illinois has been ruled by moderate Republicans, and now we see Republicans are in a super-minority status in the legislature," he said. "We have got to ask ourselves, how did we get there? And I think that the obvious answer is moderate leadership in the Republican Party doesn't work," he said.

"I don't know that we've ever had a conservative governor in the last 50 years. Absolutely not. And as a matter of fact every governor holds responsibility – even the Republican governors – for the problems we now face. Good grief, it was Jim Edgar that started the pension problem."

Prior to Edgar's time in office, there was no formula for how much the state should contribute toward pensions. Edgar's plan, which became known as the Edgar Ramp, created a payment schedule that slated the largest payments for decades down the road – well after Edgar, and almost all of the lawmakers who voted for it, would be out of office.

If either Bailey or Rabine were to win the governorship, it would be the first time since 1932 that someone without at least a bachelor's degree has held that office. Rabine has only a high school diploma and Bailey has an associate's degree in agriculture production from Lake Land College.

Schimpf, one of the more moderate candidates, retired after 20 years in the U.S. Marine Corps at the rank of lieutenant colonel. He served first as an infantry officer and later as a lawyer. He participated in the trial of Iraqi dictator Saddam Hussein. In 2016, he defeated former Lt. Gov. Sheila Simon in a run for the State Senate. He said he did not seek reelection to the Senate in 2020 because he had hoped President Trump would appoint him to a federal judgeship, but that did not pan out.

"I'd say that generally the way that you have success as a Republican getting elected in Illinois is to be somebody that can solve problems, as opposed to just being a bomb-thrower," Schimpf said. "The people of Illinois are looking for a leader who can unite our state. I tell people if you're looking for a candidate who's going to advocate burning everything down, that is not me."' 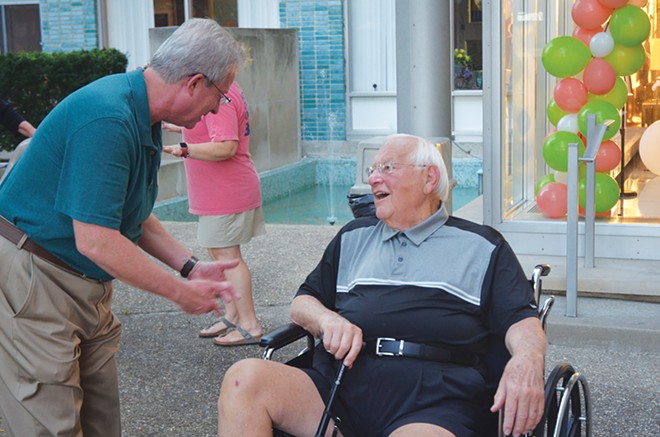 Money is often called the lifeblood of politics and Pritzker, who self-funded his last campaign, spent $172 million in his previous bid for governor.

Former Gov. George Ryan said whoever Republicans nominate will have to be a prolific fundraiser to have a chance of beating Pritzker. A trinity of conservative Republican mega-donors – Ken Griffin, Dick Uihlein and the Ricketts family – hold the purse strings for Republicans seeking statewide office.

"I think the minimum that you're going to need to win a general election in Illinois is $50 million," Schimpf said.

"In a general election, you aren't going to get there without the support of the Griffins and the Uihleins and the Ricketts. But in a primary, I think you can win for less than that. I think you can probably win the Illinois Republican primary for as little as $2 million – if you have the right candidate and the right message and you have a grassroots movement," he said.

The three Republican mega-donors effectively act as ideological gatekeepers who determine whether the Republican nominee will have a viable race.

Ryan said he is not yet willing to write off a moderate's chances, though.

"If he could get a foothold in Chicago and pick off a couple of the big wards, he might be able to pick up the governorship. He could win big in southern Illinois. I don't think you can elect a Democrat down there. I was down there a couple of weeks ago, and I think they're going to have a solid run for a Republican down there. And in the middle of the state, I think the Democrats are in big trouble. So, the big problem is to pick off a couple of wards in Chicago or at least up in the northern suburbs. DuPage County is about half Republican and half Democrat." 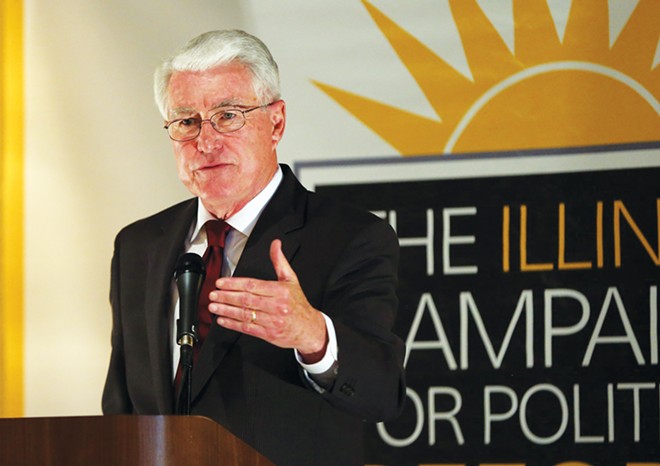 Photo by Terrence Antonio James, Chicago Tribune
Former Illinois Gov. Jim Edgar speaks at a luncheon put on by the Illinois Campaign for Political Reform at the Standard Club in Chicago.

Former Republican state treasurer Dan Rutherford, a moderate, is skeptical of his party's chances against Pritzker.

"No, no, no. I don't think a moderate can win a primary unless obviously the Trumpites split their vote. But I think if it gets down to the more conservative – I don't want to say radical – but animated types, they can definitely win the primary, but then they'll go on to lose the general election," he said.

This, of course, begs the question of why the Republican Party shifted from what had been a successful strategy.

"The suburbs and downstate changed," said Monmouth College lecturer Johnson. "A conservative Republican can win downstate. But unless the Republicans nominate a moderate, I don't think there is any way they can win."

Jesse Sullivan is well-funded, but does he have a chance?