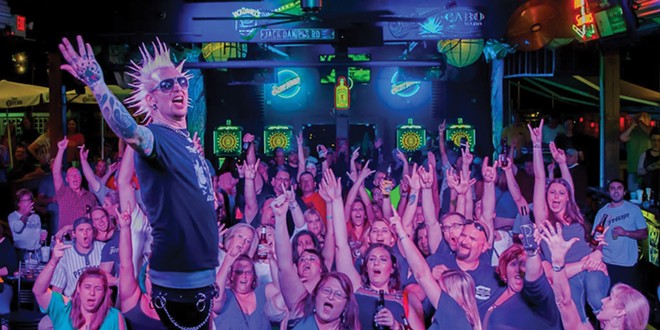 What a lovely sight it is to be at Thanksgiving for 2021. A glance backward at last year's Now Playing lists mostly activities found only in the digital domain. We can certainly say the times have changed, and that's something to be thankful for.

Since Thanksgiving always falls on a Thursday, and being reasonable and practical folks at Illinois Times, we always bow to the holiday schedule by distributing IT copies on the day before the celebration. That then gives me room and reason to pontificate and promulgate about the biggest party night of the year, Thanksgiving Eve. Sometimes it's still hard to reconcile the downfall of New Year's Eve and St. Patrick's Day, those longtime flagships of the inebriated holiday happening, but for years now, the night before Thanksgiving has taken the crown as the pie-eyed, pickled party king.

I've noticed a movement toward the Friday after Thanksgiving as becoming the preferred party night, at least for those of the age where they may be and most likely are, responsible for the success of the Thanksgiving holiday. That makes sense to me then, that the elder tipplers would make the day after more of a big night, while the crazy kids have the day before, and everyone meets in the middle for a gathering of a mighty meal and a nice nap.

As we segue into checking the music listings, let's first make up for a missed anniversary party, as last weekend, The Curve Inn celebrated 19 years as a business under the ownership of Ami and Ray Merchant and Don Thompson. We missed it here by talking about other stuff, but I will say there's no better example of what a venue can be than what The Curve has done to promote, expose and develop live music in Springfield. From the sound stage produced by the one-and-only Ric Major, to the fine staff and constant dedication to hosting live music consistently, our congratulations to one and all. And you can continue the celebration this week as X-Krush takes the coveted Thanksgiving Eve slot, Jack Flash with For the Love of Lennon starts you up on the Friday after and NCR drives it all home on Saturday night.

Now for some of those talked-about Thanksgiving Eve gigs, as Tom Beverly and Geoff Ryan play up 3Sixteen, Colin Helton hosts the Wide Open Mic at Bar None, After Sunset sails into Motorheads, NCR blasts the Boar's Head and Rockhouse rocks the house at the Main Gate, just to name a few. Then on Black Friday we have the Frank Trompeter Quartet appearing in a public performance for the first time in two years, jazzing up the Friday Night Jazz at Boone's, the Brandon Santini Band sliding the blues into Third Base, the inimitable Mr. Opporknockity dipping into Danenbergers, me and the Hayburners standing on a corner in George Ranks, Tom Hart's Folsom Prison Five breaking into Motorheads, Mike Burnett & the Suns shining at the Blue Grouch and Angel Brown's Smooth 'n' Blue Band coloring your mind at Lime Street, just to name a few more.

For more holiday weekend music-making, peruse our listings which include this Saturday night's special show when Tommy Castro, with the Groove Daddies as exceptional guests, knocks the blues bottom out of Danenbergers.

For an early next week kicker, the Illinois Central Blues Club Blue Monday night at the Alamo hosts Harper, an award-winning, dynamic, rootsy bluesman who plays harmonica and didgeridoo, while singing and performing his original songs backed by the Midwest Kind band.

Happy Thanksgiving, including those days (and nights) before and after.