Some raise concerns over speed of approval, use of farmland 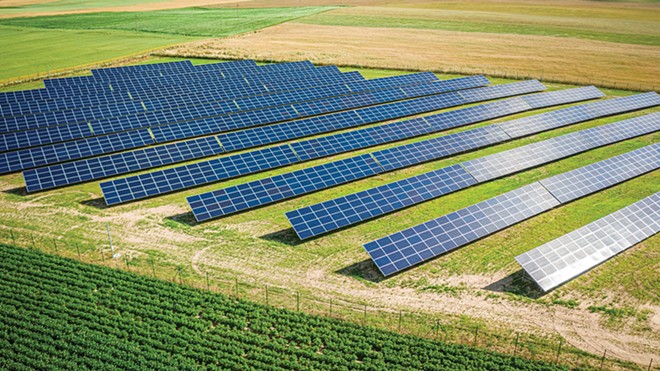 The Sangamon County Board approved what would be the largest solar project in Illinois earlier this month, moving forward with a plan to place solar panels on 3,250 acres of land in southwest Sangamon County over the span of a 35-year leasing agreement.

The board voted 21-4 to approve the plan, which allows Swift Current Energies to undertake its Double Black Diamond solar project. The photovoltaic generators would span 4,100 acres of land altogether with some of the project straddling the border into Morgan County.

Speaking at the Nov. 9 meeting, project manager Daniel Sheehan said Sangamon County could expect to bring in $71 million in tax revenue over the 35-year life of the project, and that it is expected to generate 976 jobs during its 12-to-18-month construction.

Responding to other questions from board members, Sheehan said Swift Current is making attempts to use union labor and has plans to plant grasses in the vicinity of the project area.

The vote also drew out several opponents. Rich Hall, who said his family has owned farmland in Sangamon County for generations, said he opposes taking 4,100 acres of farmland out of agricultural use for an industrial project. He was among others who also said they felt the project's approval process was moving too quickly.

"We are in the breadbasket of America," Hall said, addressing the board prior to the vote. "I don't understand how something as significant and important as this can be pushed through so quickly."

Lucy Stafford of Pleasant Plains, who owns property between Waverly and Modesto directly adjacent to the project area, also spoke, saying she was part of a group of citizens who have expressed concern about this solar project in particular. While she said she is very much in support of clean energy projects like solar energy, her concern is the appropriation of farmland for the project.

"Solar is good, but it has to be done thoughtfully and responsibly," she said, speaking with Illinois Times about the concerns she and others she's spoken with have with the project. "It's the size of this project and the location. My cohorts feel it's wrong to take valuable Illinois farmland out of production. We can accomplish the goal (of clean energy) without taking out agricultural fields."

During the vote, board member Craig Hall, who voted no, explained his opposition.

"The reason I ran for county board years ago was to protect agriculture. I don't want to say that we've hurried this along, but I don't know if we saw the car until we were in the middle of the road," he said. "It's going to change the character of that area."

The project occurs as Illinois makes a larger pivot toward renewable energy, having set a goal of generating 25% of its power from renewable sources by 2025.