With these basics, you compose the recipe 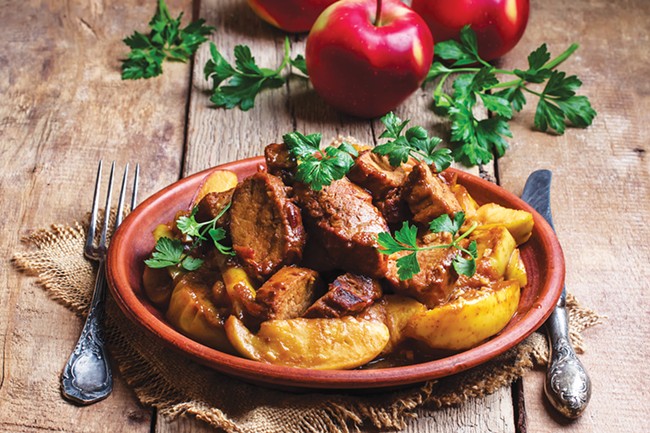 Humans have likely been making stews for as long as they've had the ability to harness fire. By definition "to stew" simply means to cook something slowly in liquid. While similar to another culinary technique called braising, the difference lies in the amount of liquid used. In a braise, just enough liquid is added to create moisture (like a pot roast), whereas a stew involves submerging all the ingredients so that the liquid then becomes an integral part of the dish.

Aside from the gustatory satisfaction that comes with making and consuming a cozy bowl of stew, the dish is inherently economical. An ideal way to stretch a limited quantity of humble ingredients, a good stew is also a nourishing way to use up whatever is on hand. It can be tailored to align with practically any diet, be it keto or gluten-free or vegan. There are hundreds of great stew recipes floating around, but it's also easy to whip up a delicious no-recipe concoction if you stick to this basic framework.

The base ingredients for your stew should be ones that hold up to long, slow cooking. If you're making a meat-based stew, opt for fatty cuts with lots of collagen, like ground pork or beef, chicken legs and thighs, beef chuck and pork shoulder, which will break down and become meltingly tender and flavorful the longer they cook. Avoid ingredients like tenderloin or chicken breast, which can become dry and tough. For vegetable stews, consider firm, sturdy vegetables like carrots, beets, parsnips, winter squash and beans. Delicate ingredients like fresh spinach and peas should be added at the end of cooking to maintain their bright color.

Meat-based stews can be made starting with raw meat or will happily make use of leftover cooked meat like roast chicken or steak. If starting with raw meat, it's preferable to first sear the cubes of meat in hot fat such as bacon grease or olive oil. This gives the finished stew a lovely deep color and adds flavor. After the meat has been seared, remove it from the pot and set aside before adding the aromatic vegetables to the pot. For most stew and soup recipes this means adding a mixture of diced onion, carrot and celery – known as mirepoix. Sauté the mirepoix in the fat that remains from browning the meat, making sure to scrape up the little crusty bits on the bottom of the pan for maximum flavor. If using cooked meat, add it after the vegetables have been sautéed.

Once the aromatics are softened, the meat can be returned to the pan along with any other slow-cooking vegetables like cubed potatoes, parsnips, tomatoes or winter squash, dried beans that have been pre-soaked, as well as additional seasonings such as herbs, mustard, tomato paste or soy sauce. Finally, it's time to add your liquid of choice (beer, wine, cider, broth or simply water are all good choices). For stews that will be simmered on the stove or in the oven, you'll want enough liquid to cover the ingredients in the pot by about an inch. If preparing in a slow-cooker or multi-cooker, you can add less liquid since the tight seal on the lid reduces evaporation. The stew should then simmer on low heat for at least 90 minutes and up to several hours. Most slow-cookers take about 8-10 hours to adequately cook a stew on low heat, and a multi-cooker should be set for 45-60 minutes on high pressure.

Some stews, especially those made with beans or potatoes, do not require additional thickening, while others are often thickened with flour or cornstarch. Flour can be added towards the beginning of the recipe by mixing it in to the mirepoix as it is sautéed, or it can be added to the stew at the end of cooking. If adding at the end of cooking, the flour should be dissolved in cold water to make a slurry before whisking it into the bubbling stew. Cornstarch should also be added in this way.

A four-quart recipe of stew will take about ¼ cup flour or two tablespoons of cornstarch to properly thicken. For those looking to keep their stew grain-free, xanthan gum (available at natural food stores or online) is a natural ingredient that works well as a thickener. A little goes a long way, so start by whisking in just a quarter teaspoon and then add more if necessary. Stews are often even better the next day, when the flavors have been allowed to meld, and will keep in the fridge for five days and freeze well for several months.

Fry the bacon in a heavy-bottomed soup pot over medium heat. Remove the crisp bacon and set aside. Increase heat and brown the cubed pork in the bacon fat. Remove the browned pork from the pan and set aside. Return the heat to medium and add the onion, carrot, celery and garlic and cook until softened and slightly browned. Add the browned pork, along with the herbs and spices, sweet potatoes, apples, chicken broth, cider and mustard. Bring to a simmer, then reduce the heat to low and cover. Cook two hours, stirring occasionally. Once the pork is tender, dissolve the cornstarch in ½ cup cold water to make a slurry then stir it into the stew. Bring up to a hearty simmer and cook for two minutes until thickened. Season to taste and serve, garnished with the crisp bacon and chopped parsley.