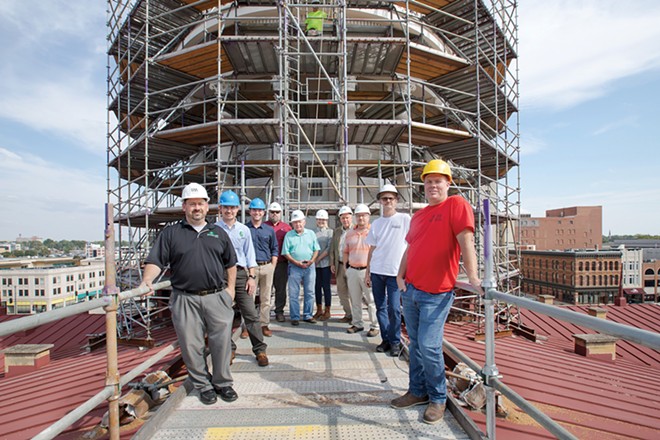 PHOTO BY RICH SAAL
The interior of the Old State Capitol reopened to the public Oct. 7, following a $1.65 million capital project to preserve the historic and iconic landmark. In February 2007 then-U.S. Sen. Barack Obama officially announced his candidacy for the presidency at the Old State Capitol, and in August 2008 he returned to introduce his vice-presidential candidate, Joe Biden.

Years ago, the Springfield Tea Party was denied use of the historic Old State Capitol because political events were not permitted ("The Old State Capitol renovation," Oct. 7). Obviously, Obama and Biden were having a bake sale.

An editorial cartoon was recently published that was rather offensive in saying, "Soldier on" (Sept. 30).

Does your staff know what that means? Your artist, your editor, your publisher?

What you decide to print and omit from the articles is a shame. Where is the bipartisan opinion? Where are the conservative or centrist portions? Why aren't these represented anywhere but your "Letters to the editor"? Why is this section only a half-page long?

Do you know that people are easier to anger than smile? Do you how common the diffusion of responsibility is? How common is conformity? Do you have a sense to better humanity? Evoking anger and divisiveness are what perpetuate the reading of your paper.

That money should be used to fix the problems of today, not glorifying people ("Political posturing: Some Statehouse statues don't stand the test of time," Sept. 30).

Ronald Reagan did more to hurt old people than any president before or after. He always was the catalyst for democracy's slide into fascism. Leave him in California.

Why would politicians send out of state one of the main things to distract the plebs from all the other misery, like low wages and crumbling infrastructure, that the plutocrats impose on Illinoisians ("Sports subsidies: Taxpayers foot the bill for wealthy teams' demands," Oct. 7)?

The fact of the matter is that the rich sports team owners are going to get money from the state either way. At least giving them money for stadiums means yokels will have a place to get drunk and scream into the void with 50,000 potential COVID-19 carriers.

I'm excited to see churches jump on board to help people of color get vaccinated ("Sweetening the shot," Oct. 7). It's only a shot, but it saves lives every day.