Aiming to convince the vaccine-hesitant with incentives 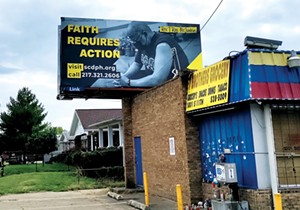 Photo by Maria Gardner
A billboard near the corner of Laurel and 11th streets features Rev. T. Ray McJunkins of Union Baptist Church and urges the community to get vaccinated.
Teresa Haley, president of the Springfield NAACP chapter, lost her father to COVID-19. He died of complications from the disease in December. "I was only able to see him a few times before he died and we could not touch him," Haley told Illinois Times.

The nursing home Haley's father was living in shut its doors to visitors due to COVID-19. She said her father died before his nursing home had access to vaccines. "It's terrible," she said of the inability to comfort her father with an embrace or simple touch of his hand. Haley said having one-on-one conversations to educate and encourage folks to get the vaccine makes a difference in people's attitudes about taking the shots. "If you tell people that you've gotten the shot, then you are living proof" of the vaccine's safety and efficacy, Haley said.

Health providers and community partners hope an upcoming vaccine outreach campaign tied to incentives will improve rates for the lowest-vaccinated neighborhoods in the city.

Haley said NAACP, a member of the state's Pandemic Health Navigator program, has hosted eight vaccination clinics thus far in Springfield, one per month, and looks forward to this upcoming vaccine outreach effort.

Springfield Memorial Hospital, HSHS St. John's Hospital, SIU School of Medicine and the Illinois Department of Public Health (IDPH), in partnership with the state's Pandemic Health Navigators, are planning vaccine sites and outreach with a launch date of Oct. 9. That's according to Angie Muhs, communications manager for Springfield Memorial Hospital.

Muhs also said that participants will receive a $50 gift card for their choice of either a grocery store or for City Water, Light and Power after receiving each shot. Those who choose the one-dose Johnson and Johnson vaccine will receive a $100 gift card. The incentives are funded by a grant from Molina Healthcare, a health insurance company. Proposed sites for the upcoming walk-in vaccination clinics include the Springfield NAACP office, Union Baptist Church and One in a Million Inc.

The Black and Latino community has died of COVID-19 at higher rates compared to other groups, according to the U.S. Centers for Disease Control and Prevention (CDC). Several factors contribute to the higher death rates, according to Johns Hopkins Medicine, such as living in crowded spaces, having jobs considered essential, a lack of access to health care, ongoing health conditions and stress.

"Income inequality, discrimination, violence and institutional racism contribute to chronic stress in people of color that can wear down immunity, making them more vulnerable to infectious disease," according to Johns Hopkins Medicine. Addressing residential segregation, the lack of affordable housing and access to health care can greatly improve health outcomes in the Black community, according to the school.

Regarding barriers to receiving the vaccine, Liu wrote in an email that "transportation to and from vaccination sites and access to devices and the internet to schedule vaccine appointments" are some of the obstacles. Liu stated this outreach effort aims to tackle the transportation issues by hosting sites in the community where outreach is conducted.

Community leaders know they'll confront fear and misinformation about taking the vaccine with some hesitancy tied to mistrust of the government, said Michael Williams, president of One in a Million, Inc. – a community resource center.

When it comes to distrust in the Black community, examples of medical racism, such as the Tuskegee syphilis experiment, come to mind. From the 1930s to the 1970s, the U.S. government conducted a study in which about 400 Black men, without their consent, were intentionally untreated for syphilis, although there was a readily available cure, according to the CDC.

Williams said he points out to those who are hesitant about getting the vaccine that the shot is similar to other immunizations taken for community safety. For instance, children get vaccines against diseases such as measles and polio "and if they don't have them, they can't attend school."

Maria Gardner is a graduate student with the Public Affairs Reporting program based at University of Illinois Springfield.