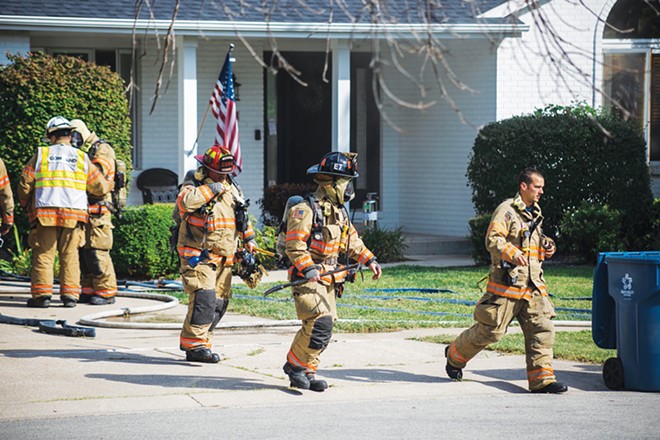 Credit: Zach Adams, 1221 Photography
During its Sept. 21 meeting, the Springfield city council approved a $750,000 contract with a St. Louis-based architecture firm to design three new fires stations. The locations have not been finalized, but one new station is intended to better serve the southwest area near Piper Glen and Panther Creek neighborhoods.

Is there anything so unique about a fire station in Springfield, Illinois, that instead of paying $750,000 to have three new ones designed, the city could not easily copy architecture already designed elsewhere for a fraction of the cost ("Fire station strategies: City moves closer to building new stations," Sept. 23)?

If the city would promote more density and develop vacant land within the city, you wouldn't need more fire stations. But go ahead and keep annexing land and developing low-density housing miles out of the city, because that's working out great for us.

Let's be very clear: I have no problem with those who want to stand in front of Planned Parenthood and holler and hold signs ("No bans, no bounties: Illinois remains committed to abortion access," Sept. 16). What is a problem are their tactics. They come at you with their arm out and something in their hand – a gun, knife, I don't know, so I tried to run out. They also stand on the sidewalk with large signs blocking my view of oncoming traffic so I can't pull out safely when leaving. Here is the kicker: the person in my car is not pregnant, she is just there for a cancer screening.

It was heartwarming to read the "Editor's note" in the Sept. 16 issue. As a former refugee worker, I understand very well why the Office of Refugee Resettlement imposes that 100-mile reach on refugee offices. It quickly becomes a matter of effective and just service for the families being resettled.

When I worked in the Detroit metro area and had to visit a family at the outer edge of our 100-mile circle, I could serve that one family, but no others that day. While working closer to home I could serve as many as three to five families in a day. We always worked at the limits of our capacity in so many ways: there were never enough human, financial or material resources to meet the need. Imagine the stress this puts on refugee workers. Often at the end of my workday I went home exhausted, stressed and frustrated, and had to be content with knowing I'd done my best, despite limitations, to support refugee families on the path to healthy and productive lives as citizens.

In spite of the challenges, refugee work was one of the most rewarding ministries of my life. As I see it, the problem is not the 100-mile rule, but the lack of a refugee resettlement office in Springfield. What can we do to fix that?

Bruce Rauner was a venture capitalist, too ("Jesse Sullivan enters governor's race," Sept. 16). VC's value profits, not people. Save us from another governor who doesn't value social services for the elderly, well-funded public schools and public services such as parks, museums and historic sites.