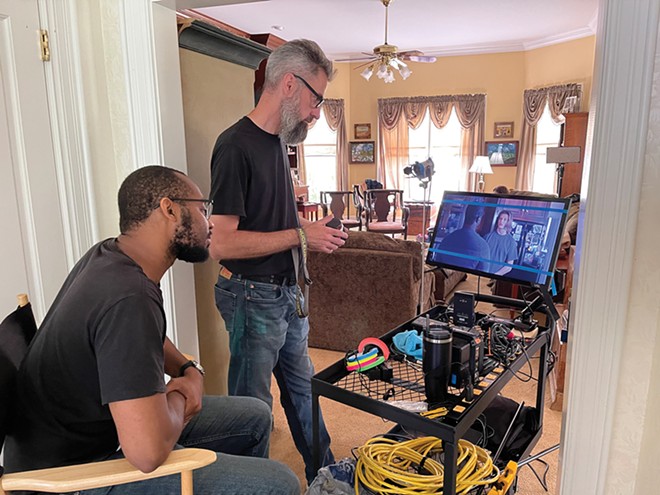 A lone figure, head down, sits at a large dining room table. At the sound of the clapboard, the director announces, "Lights. Camera. Action." Others slowly enter the room and take their seats at the table. There is chatter among the group, and then at one end of the table two discuss the time they decided to sneak out of the house; at the other end of the table a couple gets into an argument, culminating in the girlfriend storming off. "Cut" rings out, and all relax.

This is the live action of a film being shot in Chatham by Aaron Thomas and Clinton Robinson with help from Brian Crowdson, all film/video producers from Springfield.

Crowdson, who has lived in Springfield for over 30 years, has owned his own business, Crowdson Creative Video Production, for the past 13 years. He studied at University of Illinois Springfield and worked as a cable company producer before venturing out on his own. "There is so much happening in Springfield and central Illinois with film and film producers," he says. "People just aren't aware of the talent we have in the area, and the many and varied productions – films in many genres and documentaries covering many topics."

Crowdson is working on several projects, including a fundraiser video for Denim and Diamonds, the Chamber's gala video, Illinois Times Food Week videos, and First Night productions. His work has taken him to Chicago to film historic African American Maxwell Street for the Maxwell Street Foundation and the Maxwell Street Blues Band. He is busy at work also on White Heat/Black Ashes, a documentary about the 1908 Race Riot. And, he's supporting the efforts of the film directed by Aaron Thomas.

Thomas, 27, has been writing since he was 17 and directing since he was 20. "I directed plays such as Raisin in the Sun and wrote scripts, but this is my first film. When I studied communications at University of Illinois Springfield, I always had a passion for film. I decided to write a short film script."

His short script of five pages turned into 50 and then 100 and required more than the two actors he originally planned to use. He advertised for actors through Facebook, and many responded, from central Illinois and some from Chicago and California. Some were acting for the first time and others were veterans in plays and film.

The film is a psychological thriller called Don't Let Me Stay. The plot involves a group of college friends invited to a house by someone they haven't see in two years. Thomas wanted to film in a Victorian mansion. He found the perfect location, a beautiful Airbnb near Chatham, owned by Cal Robinson and Daniel Jones. When Thomas approached them about filming, they opened their home to the cast. The shooting wrapped up on Aug. 23.

Clinton Robinson serves as assistant director, and he also runs his own company, R&R Film Productions, which has several projects in the works. First, he oversees hiring workers, acquiring rentals, and finding locations for a film being shot in Detroit, though all the actors are from Springfield. Called Look the Other Way, it is about police corruption and sexual assault. Shooting will begin in October with a release date around late spring 2022. Another film in production, fully funded and distributed, is Shadow of the Mind, which Robinson has written, produced and directed. The film's main character is schizophrenic. "I spent almost three years researching the mental illness so that I was sure it is portrayed correctly," Robinson says. That film will start shooting in mid-November with a release date of August 2022.

Wrapping up a film shoot leads to the next stage – getting the film noticed. Both Thomas and Robinson plan a festival run, presenting their film, conducting interviews and possibly serving on a panel at film festivals such as Sundance, in the hope that their films will be picked up. Maybe Warner Brothers? Netflix? Another possibility is streaming into select theaters.