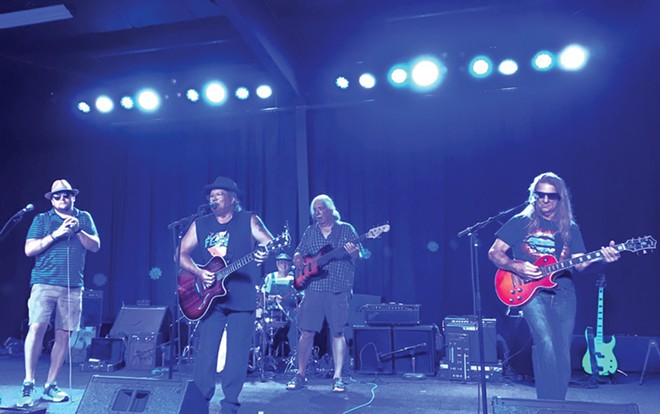 Hello everybody, and welcome to the waning weeks of September 2021 as we enjoy the beginnings of the autumnal season. Our live music scene continues onward, bolstered now by the cooler evening temps (mostly) and plenty of stuff a-happening.

First, let me apologize for getting ahead of myself last week when announcing the upcoming music shows at the Abraham Lincoln Presidential Library and Museum. The acoustic concert by native Welshman and longtime Chicago resident Jon Langford of the Waco Brothers, the Mekons and other alt-country style bands is this Saturday, Sept. 25. Jon plays with partner John Szymanski for two sets (11 a.m. and 2:30 p.m.) in the museum's main indoor plaza and is lined up to do an interview between shows in the area hosting "The State of Sound: A World of Music from Illinois" exhibit, which focuses on the history of music made in the Land of Lincoln.

The other upcoming ALPLM show is next Thursday, Sept. 30, when the Red Prairie Ramblers, a traditional, old-time folk and country band that focuses on Illinois fiddle and folk tunes, plays a ticketed event in the Union Theater at 7 p.m. There, we got that all straightened out now. I just hope no one showed up disappointed on the wrong day due to my incorrect reporting, but at least it was a week early and you're still not too late.

The big hoopla this weekend is the return of the International Route 66 Mother Road Festival and car show covering a nine-block square area of downtown. You can read all about it in my cover story (first one for me in several years) in this week's Illinois Times. The article focuses on festival history and recovering from the lost pandemic year, but I saved the best news for my space here. Yes, there is live music happening on the streets of Springfield for the fest, and it's again booked and organized by Mike Austin of Mikey's Entertainment Service at the Isringhausen Imports Stage on Washington Street between Sixth and Seventh. Lady Luck (including some former Hit Man members) welcomes the car crowd at 8 p.m. on Friday with a rockin' variety set and Harmony Deep keeps the 70s alive through song at 1 p.m. on Saturday. When the 3 p.m. burnout contest is finished, Folsom Prison Five deals up Johnny Cash at 4 p.m. Then after Mayor Jim Langfelder gives a key to the city (yes, I guess we still do that kind of thing) to Butch Patrick, the actor who portrayed Eddie Munster in "The Munsters" TV show, around 6 p.m. The Damned (not damn!) Torpedoes free fall into all Tom Petty songs starting at 7 p.m.

For the DIY-ers, Recycled Records hosts their own stage in front of the venerable store on Adams near Seventh on Saturday afternoon. Starting at 1 p.m., check out the Rick Mari Band, followed by a reunion of sorts by the Hipbone Sam Band. As you may already know, Mark Kessler, along with his brother and co-owner Gary, are going to sell the store — or heaven forbid, close it —by March 31, 2022. They're ready to move on after a lifetime of being the best record store ever, anywhere, in my humble opinion. So, here's a last chance offer to experience a couple of killer bands while perusing the hot rods outside and cool records inside at the one-and-only Recycled Records.

In the meantime, enjoy yourself, be careful and be sure to look up all the other music happening all over town. And, remember, you have until 11:59 p.m. on Monday, September 27, to vote in the famously fun Illinois Times Best of Springfield Reader's Poll. Good luck.