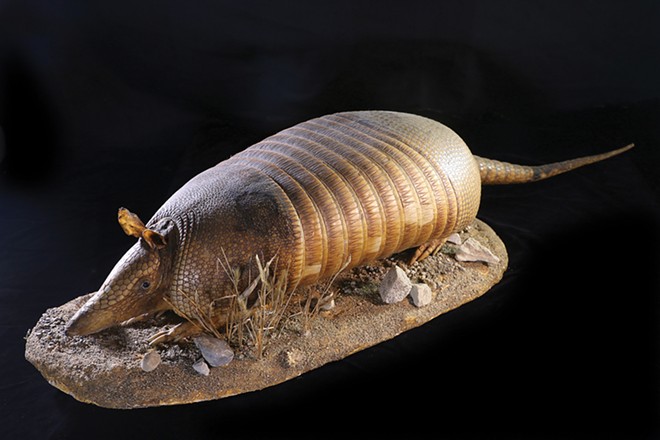 An armadillo is an odd-looking mammal with bony plates covering its back, head, legs and tail. It's also not your typical roadkill in Sangamon County. Recently a dead armadillo was found on Yucan Drive in Springfield, behind a car dealership just north of Wabash Avenue. Someone notified the Illinois State Museum of the unusual find. Dr. Meredith Mahoney, curator of zoology, verified it was an armadillo. This is the first known specimen in Sangamon County.

Mahoney describes the armadillo as a "cool and weird species" and says there is nothing else like it in the U.S. It is also highly unusual to find in this area.

Armadillos are common in Central and South America. The nine-banded armadillo is the only species of armadillo that lives in the U.S. They like warmer climates, but have been expanding northward from the far southern states over the past 200 years and now are more common into Missouri, Tennessee, Arkansas and Oklahoma. They have been seen frequently in the southern half of Illinois.

Researchers at Southern Illinois University have been documenting the expansion into Illinois and believe that climate change is a factor. Armadillos don't hibernate, but they burrow underground and can't survive our typically cold winters. The potential impact on native wildlife is unknown, but is a concern to wildlife biologists. Armadillos are known to carry diseases that can be transmitted to humans.

It is unknown how this armadillo ended up in Springfield and if there are others. They are known to "hitchhike" to new areas, such as via train cars. A specimen from the Jacksonville area was found a number of years ago near train tracks.

It is possible we may see more of these unusual creatures as they continue to spread northward. If you happen to see an armadillo in our area, Meredith Mahoney would love to hear from you. Contact her at meredith.mahoney@illinois.gov.