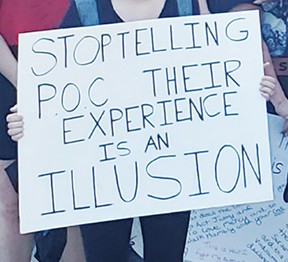 Credit: Rachel Otwell
A sign at a protest in Springfield that took place in the wake of George Floyd's murder last year.

A new national movement that aims to support the teaching of accurate history launched earlier this month with a call including more than 2,500 people from across the U.S.

Learn from History is a coalition taking a stand against efforts to ban teaching about racism and other forms of oppression in public K-12 schools. The coalition includes partner organizations such as the Center for Antiracist Education, the News Literacy Project, Education Board Partners and Teach for America, among many others. The coalition was put together by Stand for Children Leadership Center, a nonprofit advocacy organization with offices in states such as Illinois.

"Schools need to provide a thorough, accurate and fact-based education," said Cesar Cardenas, national communications lead for Learn From History. The coalition launched with a website that provides toolkits for parents, teachers and school leaders. The packets include information on measures in states such as Tennessee and Pennsylvania that take aim at schools teaching "divisive" concepts. Learn From History aims to illustrate the swell of public support around making education more inclusive and representative of the experiences of diverse people.

Cardenas and others argue that learning from the past is key to preventing similar mistakes from being made in the future. The Learn from History website shows a visual juxtaposition of a black and white photo depicting a scene from a sit-in protest against segregation during the Civil Rights Movement with a more recent photo from the Charlottesville "Unite the Right" protest in 2017, which included avowed white supremacists. "Unfortunately, rampant misinformation about what is taught in schools is forcing teachers to omit difficult parts of our history and not teach students that racism is wrong and is adding yet another stressor for teachers at the worst possible time," the coalition's website states.

Currently at issue across much of the country is "critical race theory." Critical race theory is a decades-old academic framework that asserts racism is upheld by legal systems and policy decisions. Some ideologues have globbed onto the term and use it when arguing that teaching lessons that are critical of the U.S. and its ongoing legacy of racism is unpatriotic.

In 2018, an Illinois high school earned widespread attention after racist graffiti turned up on its campuses multiple times. The vandalism led to the creation of HEROS: Healing Everyday Racism in Our Schools. Founders of the Illinois-based group argued that the graffiti was indicative of systemic racism and that students should learn from experiences of those who have been harmed by racism.

Laurie Goldstein lives in Wilmette. In 2020 her youngest son graduated from New Trier High School, the school where hateful graffiti sparked conversation about how to dismantle racism. Goldstein has been involved in HEROS. She herself was educated in northern Illinois and said as she got older she realized there were "gaping holes that you could drive a truck through" in the history lessons she had been taught. Goldstein, who is now partnered with the Learn from History coalition, said after the murder of George Floyd last year, HEROS has seen increased interest and membership has grown.

Unlike other states where legislators have crafted bills meant to ban lessons about racism from being taught, Illinois has passed legislation in recent years meant to ensure curriculum includes the contributions of people of color and the LGBTQ community. Tiffani Saunders is a former professor of African American studies at University of Illinois Springfield. She is a member of the Ball-Chatham school board and left UIS earlier this year for a position as equity, diversity, and inclusion consultant for Memorial Health System in Springfield. Saunders also pointed to a new state law that requires media literacy lessons in public schools. Saunders said Illinois is at the forefront of ensuring students get inclusive lessons and are encouraged to think critically about the media they consume. "We're in the process of thinking in terms of our responsibilities in educating and preparing the next generation for the world that's out there."

Mimi Rodman is the executive director of Stand for Children Illinois, part of the Learn from History coalition. She echoed that Illinois, in particular, has made strong steps forward when it comes to how schools address race. She pointed to the new Culturally Responsive Teaching and Leading Standards in Illinois, which incorporate concepts such as implicit bias into public schools. The standards take into account that oppression is systemic and can influence how teaching happens in classrooms. Rodman said the work is ongoing. "Vigilance is very much called for here," she said. Rodman said she believes there is broad, bipartisan agreement that accurate history lessons should be taught in schools. That premise is part of what Learn from History is working to highlight.

Cardenas said Learn from History will be sharing the stories of how inadequate history lessons can lead to negative consequences and will help show there is a groundswell of support to rectify that harm. "We believe that we're winning the fight." Find out more about the coalition at LearnFromHistory.org.