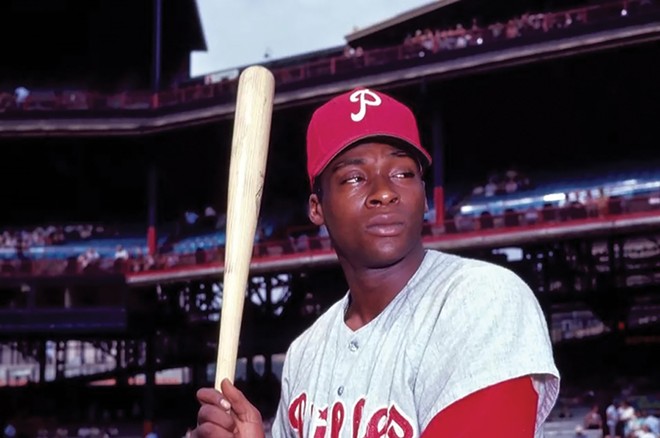 Dick Allen began his 15-season Major League Baseball career in 1963, playing for the Philadelphia Phillies. He was an All-Star in seven seasons and is ranked among baseball’s top offensive producers of the 1960s and early 1970s, but has never been inducted into the National Baseball Hall of Fame.

As a congenital Philadelphian, I recognized immediately the pictured-from-behind subject of this week's cover story as that of the late Dick Allen, wearing his #15 Phillies jejune road uniform of the 1960s ("A league of their own," Sept. 2). Allen passed away in 2020, at age 78. The Phillies this year wear a commemorative #15 on their sleeves.

As a point of correction to Mike Pittman's excellent article on the Negro baseball leagues, the implication from the caption under the same photo appearing in the body of the article is that Dick Allen actually played in the Negro Leagues, but he never did so. Allen's entire minor league career between 1960 and 1963 was with the Phillies minor league affiliates.

Allen was an unforgettable ballplayer. Quixotic and aloof, he was a Paul Bunyan-like figure crammed into a statuesque ebony-colored frame of modest dimensions. But, trust me, he was beyond dynamite. As a youngster obsessed with baseball and my hometown Phillies, I saw Allen countless times during his first stint with the Phillies between 1963 and 1969. Several of my fondest memories include those of his running gait that mimicked the speeding wheels of a steam locomotive, his use of a 40-ounce bat that is the baseball equivalent of swinging an anvil and two of his gargantuan home runs that I witnessed in person at the old Connie Mack Stadium – a stadium which, like many stadiums of its era, had cavernous dimensions that favored pitchers (such as Springfield's Robin Roberts) over hitters.

One of the homers came after Allen had to hit the deck to avoid a nasty brush-back pitch thrown at his head. He picked himself up, glared at the pitcher, re-entered the batter's box and promptly launched the next pitch as a moonshot that cleared the 60-foot roof over the left field stands – one of Allen's many career home runs that traveled over 500 feet.

The other home run was of a different character. Connie Mack's center field fence was 447 feet from home plate, a prodigious distance not uncommon in those days, but almost never seen at today's major league center field fences. One night, Allen connected and smashed a line drive that never rose above 20 feet high but somehow carried over the 447 sign, to the astonishment of the center fielder and to everyone else in the world of baseball.

Allen's 15-year career, with its ups and downs, has been well-chronicled elsewhere. There is controversy about whether or not he belongs in the National Baseball Hall of Fame in Cooperstown, New York. We Philadelphians sure think he does.

I called the Department of Public Health COVID hotline and asked if they were keeping a list of people who wanted to get the booster shot. The response was, "No, we started a list, but it became too much trouble."

My wife's sister and her friends live by the Indiana border and they went to Indiana and got their booster shot weeks ago.

When Illinois finally rolls out the booster program, it will be inundated with calls and overwhelmed. I do not want to have to spend days waiting on the phone when a motivated person on a waiting list could be contacted by the office, scheduled and then vaccinated.

The record shows half our populace will not get a shot under any circumstances, so we might as well move on to the booster program. The politicians will be first in line and given preference to get the shot.