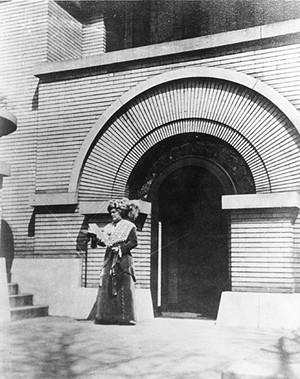 CREDIT: SANGAMON VALLEY COLLECTION
Susan Lawrence Dana lived in her rebuilt home from 1904 to the late 1920s. She entertained often, sometimes with as many as 1,000 guests.

Walk from the Dana-Thomas House at the corner of Fourth and Lawrence in Springfield, down to the Governor's Mansion and around to Fifth Street. In just that short stretch, you can see four buildings listed on the National Register of Historic Places. The education committee of the Dana-Thomas House Foundation (DTHF) has published a free booklet describing a self-guided walking tour: Historic Dana-Thomas House Neighborhood Walking Tour. It's intended to help bring this area of the city alive.

A few years ago, the DTHF purchased properties along East Lawrence across from the Dana-Thomas House. The foundation's education committee decided to find out more about the area. Who were the people who would have looked out of their windows and seen the enigmatic, wealthy socialite, Susan Lawrence Dana? Or who might have watched the construction of her new home, designed by an architect named Frank Lloyd Wright?

Extensive research followed, using city directories and other records at Lincoln Library's Sangamon Valley Collection, as well as information the foundation had gathered over the years. "Many know of the Dana-Thomas House and Susan Lawrence Dana," says Allicent Smith, a member of the education committee. "We wanted to know about the others who lived nearby. We discovered that prominent citizens lived near Susan Lawrence Dana. These people helped shape Springfield, owned businesses downtown, served the city as educators, lawyers, druggists, etc. Many of the women were active in charities, formed the Springfield chapter of the Daughters of the American Revolution, and supported the Lincoln Colored Home." 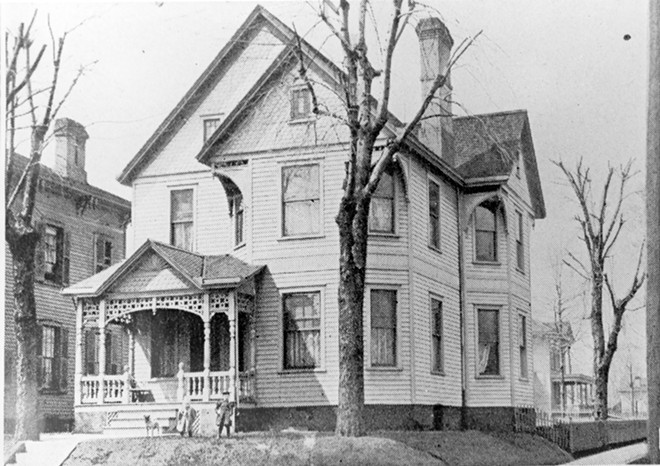 The education committee hosted a Zoom webinar to highlight the people, and then, through a grant from the Sangamon County Historical Society, developed the walking tour booklet.

There are 15 featured stops on the one-mile walk. The colorful 14-page booklet, along with a map, presents information about the people who lived in the area, along with pictures of former mansions that stood along Fourth Street. It brings to life events that shaped the area, such as a massive fire in 1916. Learn about Susan Lawrence Dana and her parents, Rheuna Lawrence, mayor of Springfield, and Mary Lawrence, who was active in charities. Meet her neighbors from when she was building and then living in her magnificent home, including Dr. John King, drugstore owner Fred Rauth and Lansing Tiffany, the state veterinarian in the early 1900s.

See the home where Charles Lindbergh once stayed and the site of the home of John Todd Stuart, Lincoln's law partner. One of the stops includes the John Condell home, built in 1842 and moved to this location in 1852. Condell owned a downtown dry goods store where Abraham and Mary Lincoln shopped. The historic house is undergoing major renovation. 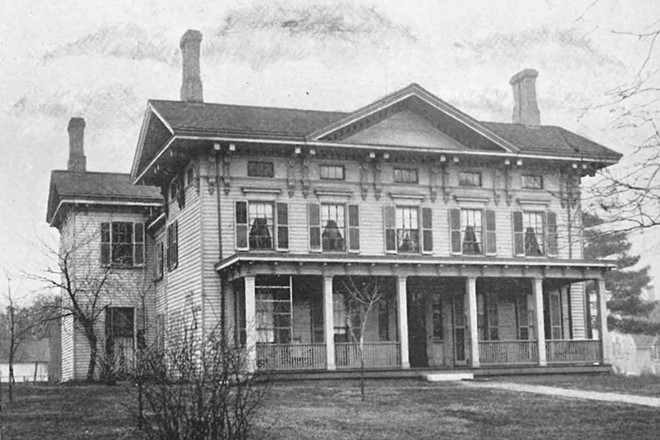 CREDIT: SANGAMON VALLEY COLLECTION
This house stood on the west side of Fourth Street on land now occupied by the Mansion View Inn. It was the home of John Todd Stuart, who was Lincoln's law partner.

Stop at the site of the six-day auction of Susan Lawrence Dana's estate, held in 1943. Interestingly, the auction was held on a vacant lot and that site is once again vacant with the demolition of the YMCA.

Learn more about the Governor's Mansion and visit the 15th and final stop, the Vachel Lindsay home. These two homes, plus the huge Hickox Apartments on Fourth and Cook and the Dana-Thomas House, are the ones listed on the National Register.

CREDIT: SANGAMON VALLEY COLLECTION
The Hickox Apartments, built by developer Harris Hickox in the 1920s, are now listed on the National Register of Historic Places.

Booklets are available at the tour's starting point – 302 E. Lawrence in the Sumac Shop, adjacent to the Dana-Thomas House – or at the Springfield Visitors Center, across from the Old State Capitol. Or download at www.dana-thomas.org

Pick a morning or afternoon and spend the day in the neighborhood, part of Aristocracy Hill. Tour the Dana-Thomas House (check the website for tour times). Stop in and shop at the Sumac Shop, pick up the map and walk the tour. Other tours are offered by the Department of Natural Resources, such as the Design like Frank Lloyd Wright Drawing Tour, also a walking tour in the neighborhood to learn about architectural styles, and the History Bike Tour that covers eight miles and visits various sites, including the Dana-Thomas House.